Men’s soccer aims to bounce back for BIG EAST play 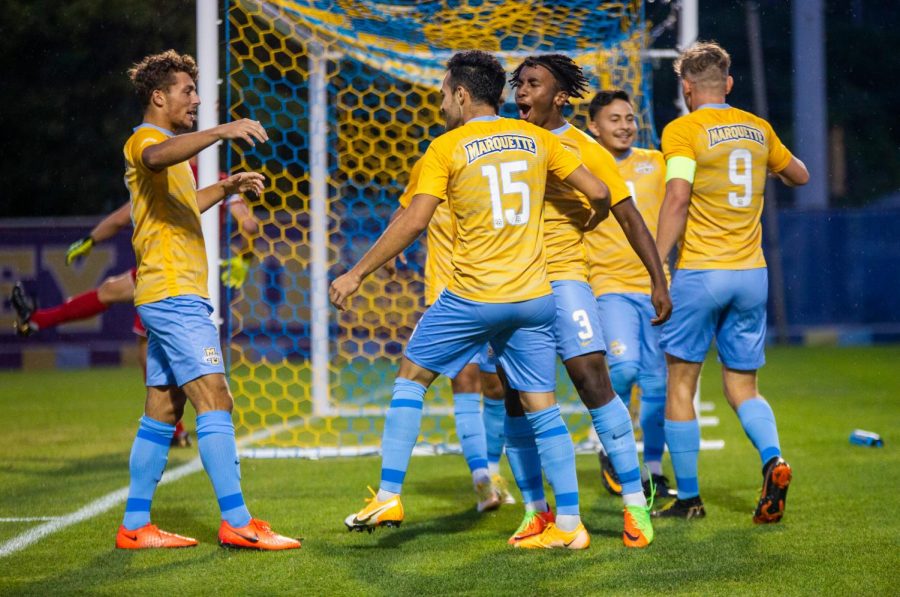 With high expectations after last season’s Cinderella run into the Sweet 16 of the NCAA tournament, the Marquette men’s soccer team started the 2021 campaign off strong with three consecutive home victories.

At 3-0 to begin their season, the Golden Eagles were ranked as high as No. 10 in the country before losing their final three games on the nonconference slate, removing them out of the Top 25.

With BIG EAST play now on deck, the team is looking to get back on track and replicate its success in conference play from last season.

“We play in one of the best conferences in the country, so it’s very exciting for us to get back into BIG EAST play,” head coach Louis Bennett said. “As for our recent play, if we want to start winning again, we have to be more us.”

Last season, the Golden Eagles went 5-1-1 during BIG EAST play as they went on to win the conference’s Midwest Division in a shortened schedule. This year, the conference is back to one division and Marquette is set to face the entire BIG EAST again, including NCAA soccer powerhouses No.1 Georgetown and No. 19 Seton Hall.

“Georgetown is the best team in the country and we get to play them at home in our last conference game of the year, so we’re just really excited for the opportunity,” Bennett said. “As for our goals for the season, that game will play a big part on accomplishing those goals.”

This season, Marquette was picked to finish fifth in the BIG EAST Coaches Preseason Poll behind Georgetown, Seton Hall, Creighton and Providence.

With all of those teams being in the EAST Division last year besides Creighton, the team is excited to face the BIG EAST juggernauts again this season.

“There are plenty of brand-new opportunities for us again this season and we all feel like we need them to push us through,”  redshirt sophomore forward Christian Marquez said. “It all comes down to being confident, this year we aren’t the underdogs and we think we’re capable of repeating our success from last season.”

Having the right mentality is something that has been preached all season long by the coaching staff and has been reiterated in the locker room and on the pitch despite the team’s three-game skid before the start of BIG EAST play.

“No one’s throwing in the towel, we have 31 guys that are managing to come out every day and give it their all at every practice,” Bennett said.

Sunesson is coming off one of his best seasons in a Marquette uniform in which he tallied six goals and two assists while starting all 13 games. For his efforts, Sunesson was named to the ALL-BIG EAST Preseason Team for the 2021 season.

“The BIG EAST is fun, it’s always fun,” Sunesson said. “I love the competition but now we just need to work as hard as we did last year and focus on ourselves to improve every day.”

After going 3-3 during nonconference play, the team will now look to have a strong campaign during league play to make a case for themselves for postseason contention for the second year in a row.

“We have a chance to make a significant run with five home games and five away games,” Bennett said. “There’s not one bad team in the BIG EAST, so if we win anywhere from 7-9 games we’ll be in good shape for the postseason.”

However, the Golden Eagles’ hopes of getting back on track will have to wait a bit longer, as the team dropped their opening game of BIG EAST play 1-0 against Villanova Sept. 18 at Valley Fields.

Marquette will now look to get its first BIG EAST win against Seton Hall Sep. 24.