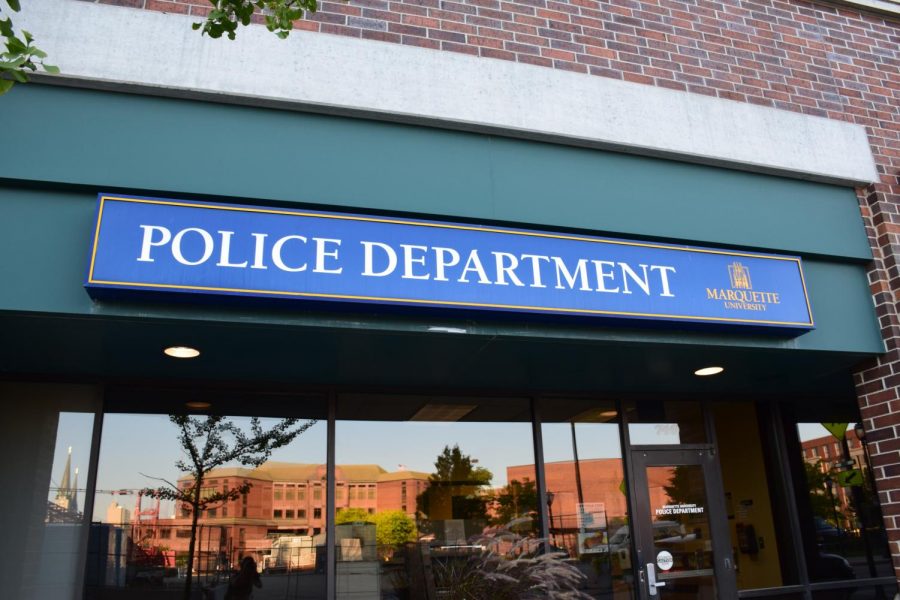 Marquette University Police Department sends out safety alerts when it deems there is an "ongoing" threat to campus.

“Is campus safe?” is a popular question for prospective Marquette students and parents. Unfortunately, it is a question with no definite answer, especially with the lack of transparency from Marquette University Police Department.

The fact that Marquette has its own police department has become a common accolade from tour guides and administration since its inception in 2015, after an agreement with the state of Wisconsin’s Department of Justice and Attorney General’s office. However, a police department is not useful if it fails to warn students of potential dangers on campus.

Last Tuesday, Sept. 14, two safety alerts were sent out to students on campus detailing dangerous individuals to look for, one for “inappropriate touching” and one for trespassing.

According to MUPD’s website, “the university’s policy is to issue a safety alert text message when there is an active threat to campus.” But there is no further explanation as to what actually constitutes an ongoing threat to campus, leaving it up to the discretion of MUPD, since every situation is different and requires individual evaluation.

This lack of clarity can lead to MUPD failing to send out alerts for incidents that may impact students simply because they did not see it as an active threat, such as street harassers and violent threats. This could leave students anxious and worried about their safety.

While it makes sense that MUPD only reports incidents that happen within the campus boundaries, this also can directly harm Marquette students. MUPD’s patrol borders of what they consider to be under their jurisdiction is posted on their website, but these patrol bounds may not be what students expect. The random jagged squares across Avenues West do not match up with the posters that Marquette plasters within dorms and buildings: It encompasses a few blocks further in every direction, such covering the south end of Highland Avenue all the way to 27th Street and St. Paul Avenue.

MUPD should be commended for extending their services beyond the immediate campus, but there are still issues regarding how the department handles incidents. There are over 450 BlueLights on campus, which can be pressed to alert to MUPD if you are in trouble. These BlueLights are common on Wisconsin Avenue and Wells Street, but they pop up less frequently the farther you get off campus. Even within MUPD’s boundaries, BlueLights are difficult to find along State Street and Clybourn Avenue, forcing students residing on these streets to take extra precaution walking to and from class.

Some parts of streets are within the borders, but others seem to jet out and then exclude a few blocks for seemingly no reason. For example, on the west side of campus on Kilbourn Avenue after 23rd Street MUPD’s jurisdiction ends. This is unfortunate because Kilbourn Avenue is a very popular street for Marquette students to reside, and the safety of these students is jeopardized without access to MUPD.

Eleven25 at Pabst is another favored location for Marquette students to live. Located just north of the Milwaukee Courthouse, the apartments are neither on campus nor within MUPD’s boundaries. Despite this, the LIMO shuttles, which take students from one location on or near campus to another, do serve students living at Eleven25 after its private shuttle stops operating after 7 p.m.

Despite the LIMO shuttle serving students outside its boundaries, like those living at Eleven25, students living off campus often have to call Milwaukee Police Department, not MUPD.

The issues with these boundaries don’t stop there. When incidents happen just outside these boundaries, MUPD has no obligation to get involved, even if it involves Marquette students or staff. So, dangerous incidents can happen in locations directly adjacent to campus and therefore around upperclassmen housing, but MUPD does not have to send out alerts just because it happened across the street from where their boundaries end.

Gunshots or robberies on campus are reported in safety alerts, but they also make campus appear unsafe and less desirable than other university campuses. However, the university taking responsibility and doing its best to address these issues would show new students and parents that it wants what is best for us, not just what is best to make more money. Students need to be aware of all safety issues on and around campus in order to make informed decisions such as not walking alone at night and always being aware of their surroundings.

MUPD needs to address the surrounding area and make all students, not just those who live close to or on campus, a priority.

This story was written by Nora McCaughey. She can be reached at eleanor.mccaughey@marquette.edu.