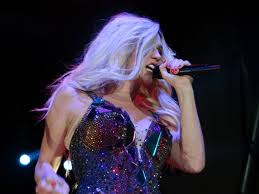 Kesha reminds the audience exactly what kind of “b**** [she is]” at last Friday’s concert at Summerfest.

On a balmy summer night, anxious crowds impatiently waited at the Summerfest BMO Harris Pavilion for Kesha to finally arrive on stage. Finally, 45 minutes later, Kesha began the performance and did not disappoint a packed audience of screaming fans.

The anticipatory energy of the crowd exploded when the singer opened with her 2010 hit “Cannibal,” which has been recently re-popularized on Tik Tok. This number was complete with a set of backup dancers on leashes and finished with a dramatic scene of Kesha tearing a fake heart out of one of their chests.

The night continued with many of Kesha’s biggest hits including fan favorites such as “We R Who We R,” “Timber,” and “Your Love is My Drug.” The singer also highlighted some of her more recent music, such as “Raising Hell” and “Rainbow,” off of her 2017 and 2020 albums.

Kesha delivered nostalgic 2010s music, high-energy dancing, several fabulous costume changes and personable audience interaction. To connect with her Midwestern audience, Kesha told a tale of her own crazy adventures in Milwaukee when she was only fourteen, saying that she came to the city from Nashville on a Greyhound bus for a concert at The Rave. The night ended for a young Kesha with a woman peeing inside her shoe.

Toward the end of her set, Kesha performed “Take It Off” and encouraged audience members to strip off items of clothing and throw them on the stage, which was soon littered with bras and other garments. Soon, audience members were throwing their phones onstage, and Kesha entertained the crowd by taking selfies and videos on several audience member’s phones.

Kesha’s setlist was anything but a letdown and she ended her main set with her mega-hit “TiK ToK,” leaving audiences singing along and screaming for more. For her encore, the performer and audience shed a few tears singing her powerful 2017 ballad “Praying.” Not wanting to end on a sad note, Kesha finished her show with “Blow,” shooting streamers from the stage into the fervent crowd.

Overall, Kesha delivered an extraordinary concert experience, evoking nostalgia from her fans and providing a flair and performance quality like only a true pop star could. But besides her glittery costumes, tireless dancing and flashy stage elements, you could tell that the star truly loves connecting with her fans and putting on a great show. She fed off the energy of the crowd and gave a performance well worth the wait. It was a night filled with screaming, sweat and glitter, but I don’t think there’s a better way to experience Kesha.