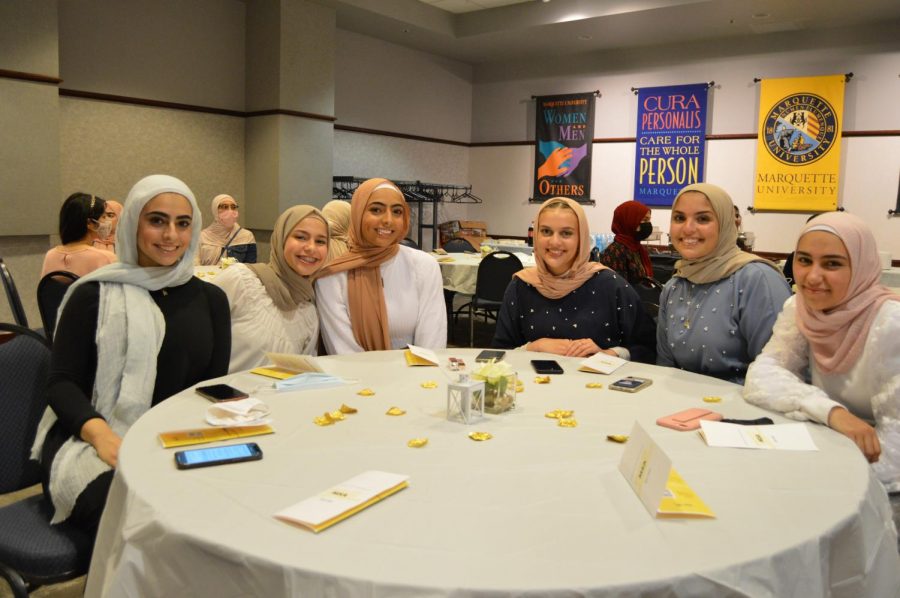 Although Marquette is a Catholic Jesuit university, it is also home to many religious groups outside of Christianity.  Muslim students make up about one percent of the student population.

The Muslim Student Association is an organization on campus that works to bring Muslim students together and connect them to students with the same faith and tradition.

However, just because it is a Muslim organization, doesn’t limit it to only Muslims. Students from any ethnicity, race, background or religion are welcome to join and experience what it is like to be a part of the community.

Dana Sharqawi, a junior in the College of Arts & Sciences and president of the MSA, recognizes how hard it can be to find your people on campus and is grateful to see so many people come out to the first meeting of MSA and meet so many students with the same faith.

“It’s crazy how many Muslims are on campus, coming in as a freshman I wasn’t introduced to that many Muslims but if you look around there are over 60 people at this event [first MSA meeting] , and that’s just this event,” Sharqawi said.

As president, Sharqawi strives to make sure everyone is welcome and feels comfortable on campus,

“You have a community here, you fit in and you belong …we accept people of all backgrounds, ethnicities, everything. We know how it feels to be excluded and I think in my year one thing we want to work on is being more inclusive to all people.”

Sharqawi understands the stress of college and recognizes that students are all in this together, “it’s college, everyone is going through something, so it is nice to have this organization and those people looking out for you.”

The MSA’s first meeting was on Sept. 10 in the AMU in room 227 and included students of all grades. Guest speaker Qari Noman Hussain, a resident scholar for the Islamic Foundation, shared his insight and knowledge on what it means to be Muslim. At the end there was a dinner which involved social time for students to get to know one another and discuss how their first couple of weeks have been on campus.

Yusra Khaja, a first-year in the College of Health Sciences, said she is very thankful to have this organization offered to her in her first year at Marquette.

“It feels really good to be involved in this, I went to an Islamic school before, so it feels really nice coming to a new school where is a big sense of community,” Khaja said.

Khaja said she is looking forward to opportunities that are offered and the future ahead for the MSA.

“I’m really excited for all the event that they have, it’s not only about having fun, it is also about spreading about Islam for those who don’t much about it and for those who want to learn more,” Khaja said.

Khaja said she was familiar with many of the students since her brother is also apart of the MSA and many of her old classmates from high school as well. She said it is nice to see familiar faces, but also meet new Muslim students at Marquette.

Last year because of the pandemic there wasn’t much for students to do in MSA, where most meetings were online. This year students like Ali Mahmood, a third year law school student, reflects on how it is nice to be back to somewhat normal and have social events like this again.

“It’s kind of overwhelming, it’s unusual to see so many people in one spot…but it’s really nice to see everyone back together, sitting with each other, smiling, laughing,” Mahmood said.

“Getting to know people, networking and you can also get involved. There is a lot of different reasons to join an organization,” Hafeez said.

Ali talks about how important it is to go out and meet people that different interests but are still connected but their faith.

“It’s an excuse to get out and know people. Normally with a club you pick what your interests are right? But religion is like a deeper interest, so it’s even better of an excuse to run into people.  It’s something that exists beyond academics so it can bring a wide variety of people into the room,” Ali said.

Ali, Mahmood and Hafeez all agree about how important it feels to be supportive and to be a mentor for the younger students going through the same problems they were. Without the MSA, they wouldn’t have been able to find those students.

MSA is also petitioning for a new prayer room that has more space for students to pray. Sharqawi recognizes that many non-Muslim students don’t fully understand the faith and she encourages them to come and check it out for themselves and ask questions instead of assuming.

“You have class with a Muslim and you kinda always wanted to know something about them, come through to one of our events. Get to learn more about your Muslim classmates, we’re just people we have regular events we do regular things. Once people come to our events they will see that,” Sharqawi said.