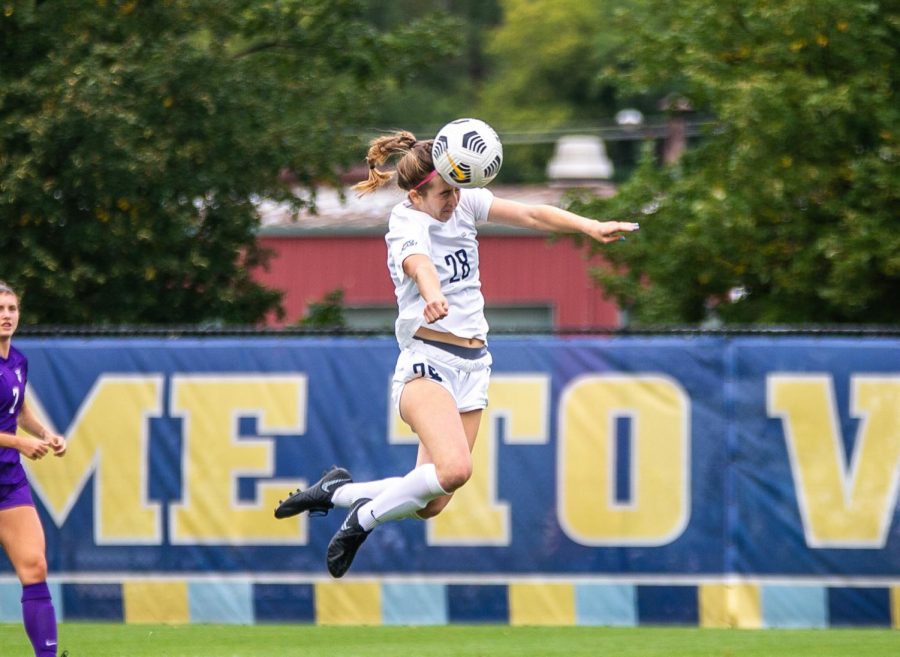 First-year forward Maggie Starker scores off the header in Marquette's 3-0 win over the University of St. Thomas Sept. 12.

“Being able to have multiple people score goals, that’s what you want in the game. We train that way every day, we train that everyone does finishing” head coach Frank Pelaez said. “At the end of the day you could ask any coach in the country, Sundays are a grind, no matter who you are playing against its a grind. The team that can just grind it out a little bit more sometimes comes out on top.”

For the third time this season, the Golden Eagles got out to an early lead.

In the 35th minute, first-year forward Maggie Starker connected on the header off a cross pass from first-year forward Kate Gibson. It was Starker’s second goal of the season and Gibson’s first collegiate assist and point of her career.

“I saw Gibby doing the work out wide and I just sprinted in. It was a perfect ball” Starker said. “All I had to do was just get my head on it, she kind of just set it up for me. It has been really fun to score right away and to help out, but I am just in the right place at the right time.”

Then with two seconds before halftime, Marquette built on their lead.

Following a Tommies foul, the Golden Eagles’ were rewarded a free kick from 20 yards out. Redshirt junior midfielder Rachel Johnson sent the shot into the upper left corner to give MU a 2-0 lead heading into halftime.

For Johnson, it was her second goal in a matter of two games.

“We got some great leaders, great people,”Pelaez said. “They want to go out with a bang. Her scoring goals, it’s pretty cool.”

It was the third time this season that MU went into halftime with a lead.

It was Maletis’ first goal of the her Marquette career.

“It was amazing, I have been playing a lot of midfield and defending so being able to score is just an amazing feeling” Maletis said.

Marquette’s depth was in full show once again Sunday afternoon. In addition to three different goal scorers, 23 different Golden Eagles’ saw time on the pitch throughout the game.

“It’s really awesome that we are so versatile in the ways that we are able to score,” Maletis said. “Coach Frankie really wants us to be able to do everything when it comes down to it .”

Next up for Marquette (3-3) will be their non-conference finale against North Dakota State Friday at 7 pm at Valley Fields.

“It’s a constant improvement we gotta keep training and improving, never think we are better than what we are, stick to the fundamentals do it aggressively and do it with enthusiasm out here in practice. Practice to me is the key to everything, how hard we go at practice, and then the game kind of sets itself. I can’t wait to be back.” Pelaez said.