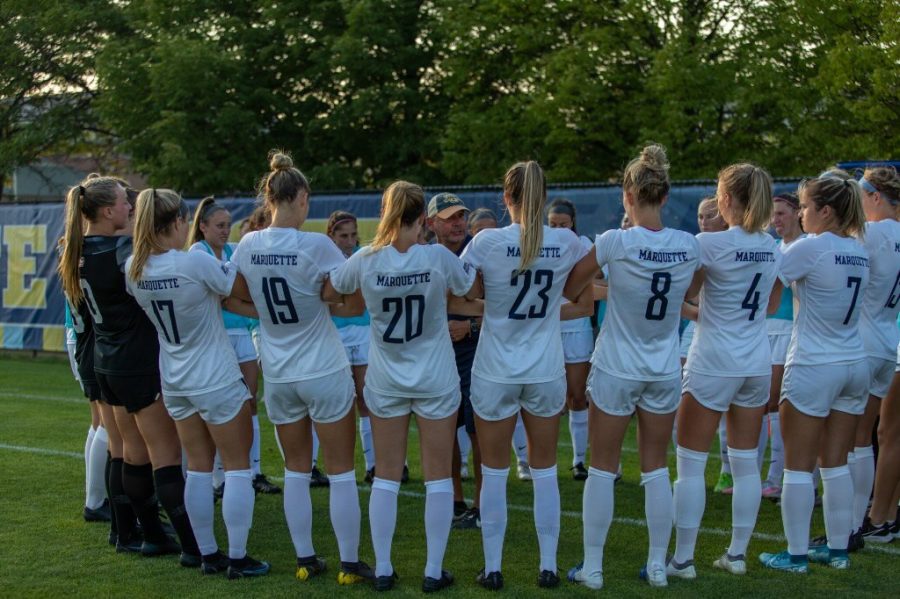 Not many student-athletes are awarded the chance to play at the collegiate level following high school, yet alone get second chances during their collegiate careers.

However, that changed this past year when the NCAA granted an extra year of eligibility to all student-athletes due to COVID-19.

“I wasn’t really ready to leave, I’ve had the best years of my life here and I don’t think I am really ready for it to be over, so when I got the opportunity to come back, I was so ready to say yes,” graduate student midfielder Elaina Eckert said.

For many, COVID-19 played a huge role last year, and to this day it is still preventing many from living the lives they were before.

Graduate student defender Maddie Monticello said throughout last year, she felt overwhelmed by the fear of not playing that “next” game due to related COVID-19 concerns. However, this year those fears no longer exist as she can just focus on winning.

“That extra part of it is not here and we are all here to leave it all out there on the field and I think setting us up in the spring was really exciting because now we know what we can do this fall,” Monticello said.

Last year with the BIG EAST postponing the fall sports season to the spring due to the pandemic, the Golden Eagles played inside the Dome at Valley Fields during February to April.

The traditional atmosphere of fans in attendance was also postponed, resulting in Marquette fans having to watch games from home instead of packing the stands.

And for Monticello along with then-seniors Kylie Sprecher and Eckert, they did not want their MU careers to end on that note.

“There is something about having the people that you love and care about being here to support, and obviously students and other athletes here at the school,” Sprecher said. “I think that’s a big part of the Marquette athletic culture is supporting each other at our games. Now that we can do that again I think that plays a huge role in our success at Valley (Fields).”

She said with losing a season and a half due to COVID-19, she personally didn’t her college career to end on something that did not feel “normal.”

“Everything with COVID last year, it wasn’t normal at all,” Sprecher said. “Leaving on that not normal season would have been really unsettling. Obviously, school is my main priority, so having the opportunity to do my MBA which I wanted to do regardless of playing soccer or not. When I got the opportunity to do both, I couldn’t pass that up.”

Meanwhile for Eckert, who saw her most successful season as a Golden Eagle last season, said it is the culture that Sprecher, Monticello and herself help build served as the reason she wanted to come back.

“We want to win games, we want to win championships and us seniors want to keep building the culture and keep leaving a mark that the rest of the team can continue to carry on throughout the years,” Eckert said. “Being able to play at Valley again on the grass has been amazing, it’s electric when everyone is in here.”

Monticello, who has had soccer as her identity for twelve plus years, said when given the opportunity to come back and play another year she was overwhelmed with excitement.

“To get to play for new people and to do it one more year in my favorite place, I thought it would be silly to not take up on that opportunity because I do not really want to hang up the cleats quite yet.”

Assistant coach Steve Bode told the Marquette Wire in August that having someone of Monticello’s skills set for another year on the backline is a huge asset.

“She has a lot of respect from her teammates. She’s a great leader and has all the traits to do it,” Bode said. “Her speed and endurance helped us a lot back there. A lot of times, she’s covering ground and able to recover and clean things up for us, so that helps a lot.”

And when it comes to the main goal for their final season, all three agreed on it.

Sprecher, Eckert, and Monticello all agreed on the fact that the main goal for their final season was not only to win games and win the BIG EAST, but to take every game one at a time and not think too far ahead.

“Obviously the goal every year is to win BIG EAST and make it to the BIG EAST tournament and win the tournament and make it to the NCAA, but I think this year it’s just taking everything a game at a time, not thinking to far ahead and getting better every game, of course we want to win but I think the more we learn from each game and build on it throughout the season, that’s a win for me,” Sprecher said.

This article was written by Kelly Reilly. She can be reached at kelly.reilly@marquette.edu or on Twitter @kellyreillyy.