“Another Day in Paradise” for Quinn XCII Fans at Summerfest 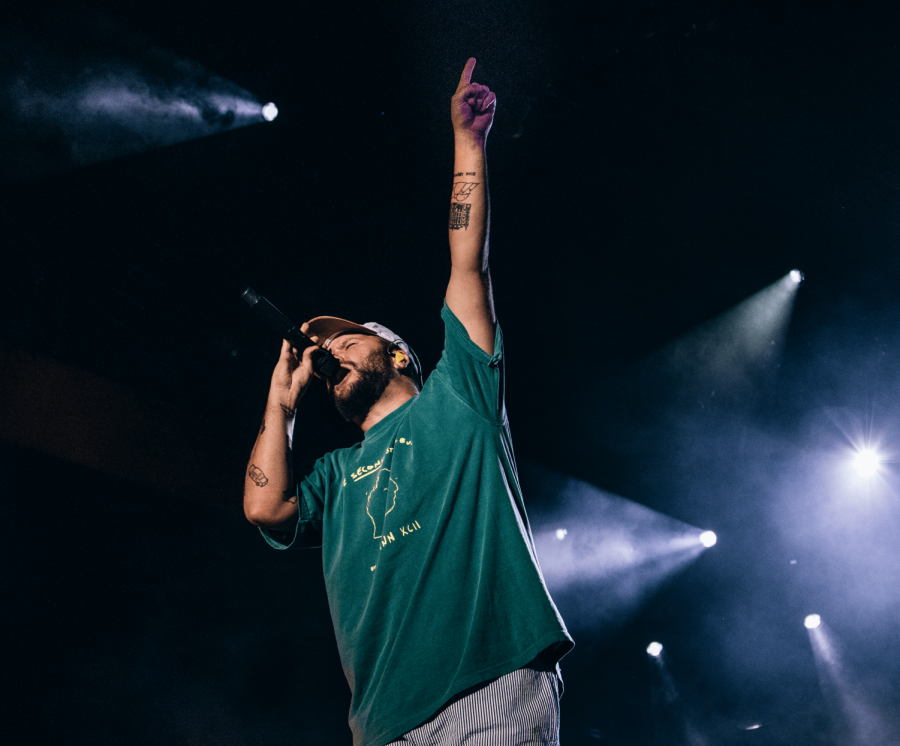 Quinn XCII provides an energetic and appreciative performance at Summerfest on Sept. 9.

Mikael Temrowski began his Summerfest concert Sept. 9 in a green t-shirt, but it only took a few songs into his performance for a fan to throw a white jersey onto the stage.

As he slid one sleeve on, Temrowski joked about contracting COVID-19. After donning the jersey, he spread his arms wide. Fans began screaming as they read the Milwaukee Brewers logo across the front of the baseball jersey. Temrowski turned his back to the audience, so they could read his stage name “Quinn XCII” sewn on the back.

For his one hour setlist, Quinn sang songs from his 2021 album “A Letter to My Past Self,” his 2017 project “The Story of Us” and songs where he was a featured artist like “West Coast” with DVBBS.

After finishing “Sleep While I Drive” featuring Ashe, Quinn announced that the next song was his favorite to perform live. The crowd replied in a roar of excitement as the beginning beats of “Candle” echoed across the pavement. “Always Been You” followed this performance.

Quinn frequently took breaks between each set to talk about his music. As an introduction to the next song, he hinted that he made the music video for this song in quarantine. He admitted he used only his wife’s iPhone camera and a few security cameras.

He also joked that it’s the best drink. Quinn suddenly broke into the opening lyrics of “Coffee.”

His next few songs followed quickly in succession: “My Wife & 2 Dogs,” “Kings of Summer” and an emotionally-charged “Look How Far We’ve Come.”

As the ending chords played, Quinn again paid due to all of his bandmates by screaming their names into the mic followed by cheers from the audience.

As he stood in front of a standing and energetic crowd, he dedicated the next song to them specifically.

“Another Day in Paradise” rang out over the cheers. Stage lights basked Quinn in pink and yellow lighting.

He reiterated that “Another Day in Paradise” was for the audience.

“This next song is dedicated to my ex-girlfriend in high school,” Quinn joked. “If she didn’t break my heart, I wouldn’t have started writing songs.”

A few solo beats resound over the speakers. Quinn began singing “Straightjacket,” a catchy song about a “psycho from the Midwest suburbs.”

“Little Things,” a song in collaboration with Louis the Child and Chelsea Cutler, started strong. Halfway through, the speakers cut out. Always the professional, Quinn quickly ushered the crowd to continue singing.

It was one of the moments you suddenly feel a lot closer to the strangers around you. All of these nameless individuals dancing around you, but you know you have one thing in common: a love for Quinn XCII’s music.

Quinn and his team struggled a bit to fix the technical issue until his voice rang out: “Hands in the air, Milwaukee!”

Immediately, every hand was reaching for the night sky as “Flare Guns” started to play across the venue.

He then encouraged everyone in the crowd to get closer to whoever they came with. He lamented a horrible past year and admitted this one last song was about a world without social distancing.

“Stay Next to Me,” his 2021 single reverberated against the hugging crowd.

He replayed the chorus a few times because he, just like the audience, never wanted the night to end.

Then, as any true, polite Midwestern would, Quinn XCII ended each song, and the concert, with a quick “thank you” as the stage plunged into darkness.

This article was written by Randi Haseman. She can be reached at randi.haseman@marquette.edu.