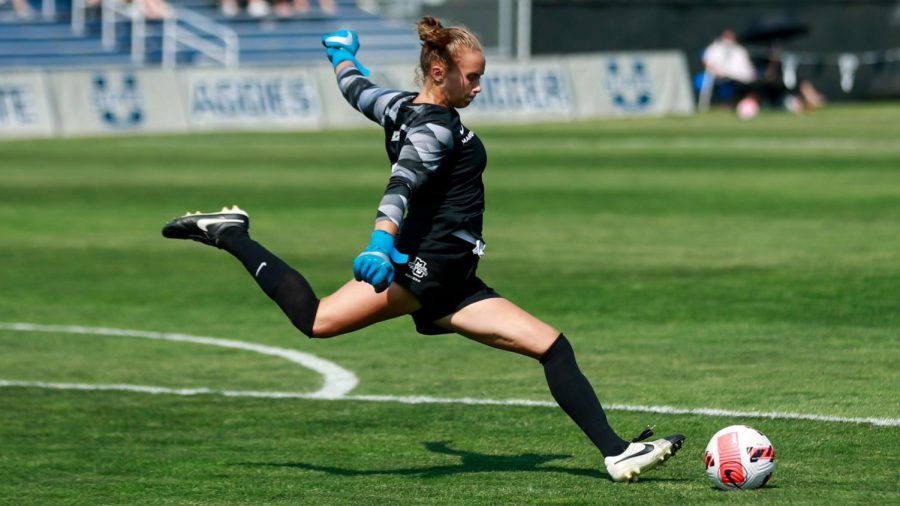 Marquette women’s soccer hopes getting back in the win column will have to wait at least another four days following a 2-1 loss to Utah State in double overtime Sunday afternoon.

“This team fought so hard against a tough opponent in a difficult environment,” Marquette head coach Frank Pelaez said in a statement.  “We are building a strong foundation on how we want to play and look forward to being back at Valley Fields this week.”

The Golden Eagles’ backline held their ground, not letting the Aggies score after an early second half goal forcing the game to go into overtime for the first time this season.

Then in the 104th minute, Utah State senior forward Sammi Murdock connected on teammate Sara Taylor’s cross to get one past Marquette redshirt first-year goalkeeper Mikki Easter for the game-winning goal.

The first half was a defensive battle between both teams. Both teams combined for nine shots in the half but none found its way to the back of the net.

Then 12 minutes into the second half, the Aggies broke the silence.

Utah State senior midfielder Kami Warner crossed one into the box and Taylor finished it with a low center shot off the hands of Easter.

In the 82nd minute, the Golden Eagles’ capitalized on miscommunication between the Aggies defenders and junior netminder Diera Walton to tie the game. Redshirt first-year Elsi Twombly was awarded the goal. It is Twombly’s first goal of the season.

Neither team scored in the final eight minutes, sending the match into overtime.

Graduate student midfielder Elaina Eckert recorded the lone shot for both teams in the first overtime but the shot sailed wide right of the crossbar.

The Aggies finished the game with a 17-9 shot advantage against the Golden Eagles.

Redshirt junior midfielder Rachel Johnson had three of MU’s nine shots. Two of Johnson’s shots were on goal. The Omaha, Nebraska, native saw 105 minutes on the afternoon, in her fourth straight start of the season.

Easter collected five saves on the afternoon. That included a save in the 86th minute when she stopped Ashley Cardozo’s shot.

There was plenty of physicality in the match, which resulted in 18 combined fouls and four combined yellow cards.

Marquette (1-3) will return to Valley Fields to take on the University of Illinois-Chicago Thursday at 7 p.m. CST.

This story was written by Kelly Reilly. She can be reached at kelly.reilly@marquette.edu or on Twitter @kellyreillyyy.