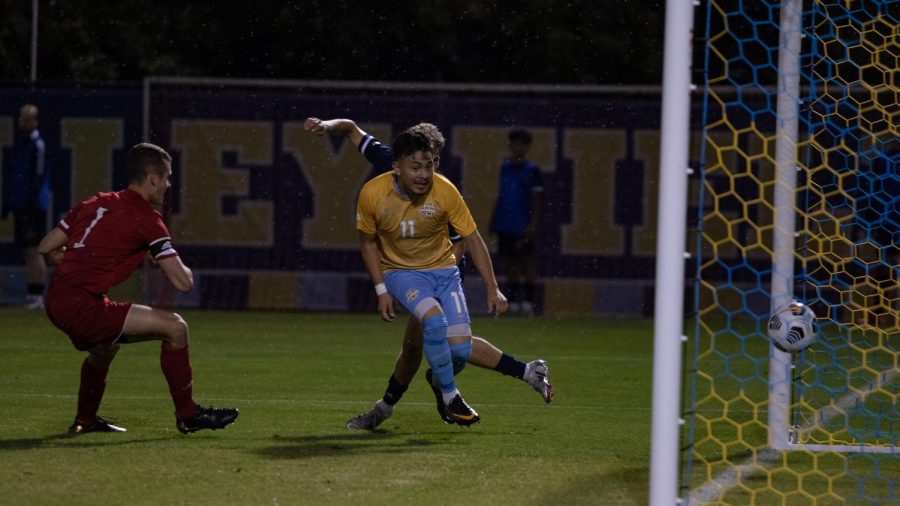 “For the most part, I felt we did good job,” head coach Louis Bennett said. “They’re (Kansas City) a good team. It’s a good win for us. Every time we have played (over) the last three games we’ve got something to learn from and something to get better at.”

Friday’s win marked a clean sweep for the Golden Eagles in their three-game homestand to open up the 2021 season.

“Anytime anyone comes here, you want to create not just the illusion but the reality that it’s a difficult place to win,” Bennett said. “We’ve done a really good job at that.”

For the third straight game, Marquette jumped out first.

In the third minute, redshirt sophomore forward Christian Marquez netted his first goal of the season off a one-touch pass from redshirt first-year Beto Soto.

“We had a couple guys out of position and the ball took a deflection off of one of our players,” Bennett said.”

Marquette would then retake the lead in the 34th minute.

Redshirt senior forward Sam Thornton crossed the ball into the box and Soto finished it with a header.

For Soto, the reigning BIG EAST Freshman of the Year, it was his second goal of the season.

The Golden Eagles stepped into their confidence during the second half Bennett said.

In the 86th minute, redshirt junior forward Lukas Sunesson looked to give MU an insurance goal but his shot sailed right of the goal.

Then two minutes later, Kansas City had an opportunity to tie the game when Marquette redshirt junior midfielder Zyan Andrade was called for a foul.

Graduate student midfielder Arne Neufang took the free kick for the Roos from outside the 18-yard box but Hallwood deflected the kick out of bounds to secure the 2-1 MU win.

Soto recorded two of Marquette’s 14 shots of the night. In addition, the reigning BIG EAST Freshman of the Year recorded a goal and an assist.

“He’s always an exciting player. He’s always a threat to the opposition,” Bennett said. “He’s beginning to understand that the college game you are going to have to play both sides of the ball. He’s becoming an important part of the fabric of our team.”

Marquette’s depth was put on full display in the 2-1 win as 18 of the 31 players on the Golden Eagles roster saw minutes.

“It’s good to have depth in training and but to have depth for games is really important,” Bennett said. “During the game we try to win the game but we’re also mindful we’ve got a game in three days. It’s going to help us in the long run. Keeping people fresh in a college season, a condensed season is really difficult.”

The Golden Eagles (3-0) will be now head on the road for the first time this season. Marquette will face Tulsa on Monday at 7 p.m. CST.

“We may have to adapt to the way that they’ve played (but) we’re not going to change the way we play,” Bennett said. “They play a slightly different system than we’ve seen and they’re kind of fast and furious sometimes. I’m looking for our team to be able to adapt and be resilient enough to get a win on the road against a really quality team.”