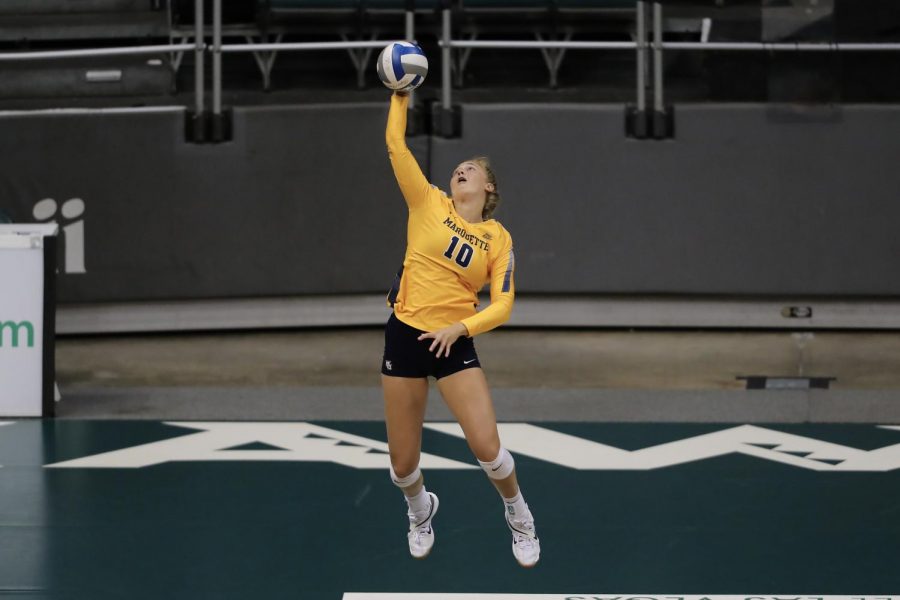 Taylor Wolf (10) goes up for a serve in Marquette's sweep over the University of Hawaii Aug. 28 2021. (Photo courtesy of Marquette Athletics.)

The Golden Eagles got out to a slow start in the first set but then were able to tie it up at 6-6. There were 12 different ties throughout the frame before redshirt junior Ellie Koontz finished it with a kill to give MU the 26-24 set win.

Koontz was one of five Golden Eagles in the set with three kills. As a team, MU hit .243 in the set.

MU hopped to an early lead in the second, but Hawaii tied it at 10-10.

After a timeout, both teams exchange leads back and forth once again. First-year Jenna Reitsma recorded a kill to give MU a 25-24 advantage but the Rainbow Wahine then tied it up on the next play.

The Golden Eagles’ didn’t stop fighting, as MU closed the frame on two consecutive points and making the score 27-25.

Redshirt sophomore Hannah Vanden Berg recorded a kill to secure the victory in the second set.

The third frame was entirely Marquette, with MU leading from start to finish and taking the sweep with a 25-21 victory.

The final set would look very different from the first two.

Vanden Berg led the way with 12 kills, while graduate student Savannah Reinne contributed with 10. Wolf totaled 11 kills, 23 assists and a match-high 12 diggs for a triple-double.

As a squad, the Golden Eagles hit .303 in the match, totaling just 15 errors on the day.

Hawaii had seven total service errors as opposed to Marquette’s two and with the first two sets as close as they were, this could’ve been what prevented a sweep and also brought them a little closer in the final set.

Following this win, Marquette is now 2-0 versus Hawaii all-time.

Marquette (2-0) will finish up the Rainbow Wahine Classic Sunday against the Fairfield Stags. The match is scheduled to start at 7:45 p.m. CST.