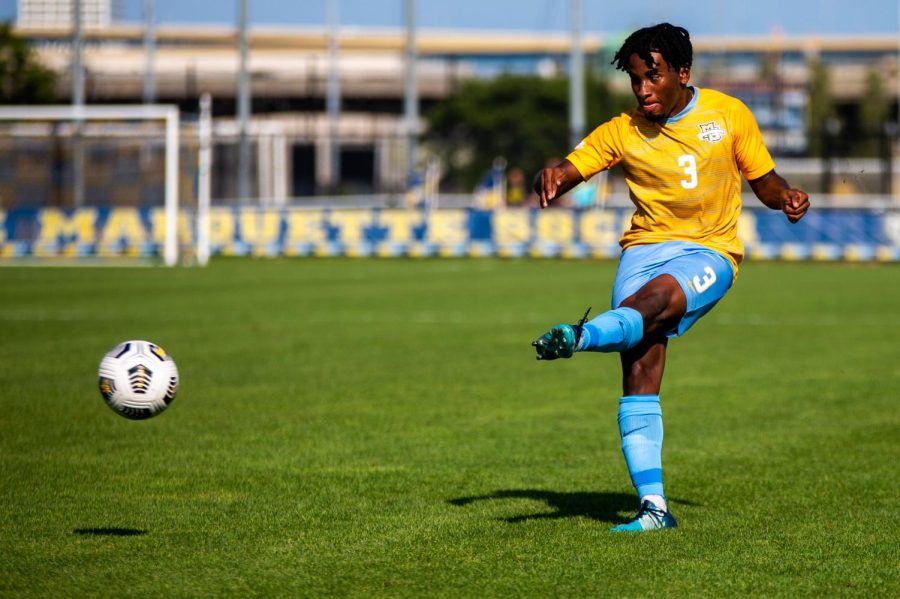 After finishing last season with an 8-3-2 record and winning the BIG EAST Midwest Division Regular Season Title and reaching the Sweet 16 in the NCAA Tournament, the Marquette men’s soccer team is looking to build off last season’s magical run.

Head coach Louis Bennett is entering his 16th season at the helm of the Golden Eagles, who are coming off their best winning percentage of a season since 2012 when Bennett’s side went 16-4-1.

“We’re really excited for the season to start and to play in front of the Marquette community again at Valley Fields,” Bennett said. “There’s a different feel when there’s fans in the stands, and it’s safe to say the excitement is definitely back.”

Marquette returns a lot of key returners from last season’s squad, which Bennett says helps when it comes to leadership in the locker room and experience on the pitch.

“We have a lot of guys on the squad who have a ton of experience on the pitch and it’s huge for our success this season,” Bennett said. “If we stay healthy throughout the year and play our game the way we know how, we can win every game we want to.”

“We’ve definitely established the chemistry between us, and I only see it getting better the more we play together,” Sunesson said. “I’m excited to see where this season takes us, the sky’s the limit.”

Sunesson is coming off his best season in a Marquette uniform. He netted a career-high six goals and two assists last season while being named First Team All-BIG EAST and a Mac Hermann Award Semifinalist. The Mac Hermann Trophy is awarded to the top men’s and women’s soccer players in the country each year.

“The whole team is feeling really good coming into the season,” Sunesson said. “We had one of our best seasons in a while last year, but I think we’re even hungrier this season to achieve those goals we missed out on last season.”

The Golden Eagles’ depth at midfield was a key part of the team’s success last season and is sure to continue again with many crucial midfielders returning this season.

Key returners such as redshirt juniors Zyan Andrade, Alan Salmeron and Zak Wegner return to the pitch this season. Redshirt sophomore Christian Marquez also makes his way back to the midfield as he led the team with three assists last season.

“The great thing about our team is the competition the guys give one another each and every day,” Bennett said. “All of our guys are competing for their spot on the team, and I’ve found it’s made our team better.”

Marquette’s defense last year put together a performance like no other as the Golden Eagles conceded only 12 goals in 13 games all season, their lowest total of goals conceded in a season since 2012.

In addition, the Golden Eagles only gave up more than two goals in a game once which game in a 4-1 defeat against Seton Hall in the BIG EAST tournament semifinals.

However, Louis Bennett’s side will have to fill two big reasons for that success in Manuel Cukaj and Oliver Posarelli.

“We have a lot of new guys and others that were injured last year that I’m hopeful will help fill in the gaps for our defense this season,” Bennett said. “Harvey Read is getting back into form for us and he will be a key factor for us on the defensive side of the ball this season.”

Reed scored the first goal of the season for the Golden Eagles in their 2-0 victory against Green Bay Aug. 26 off a corner kick from first-year midfielder Edrey Caceres.

Marquette will also look to turn toward redshirt sophomore Alex Mirsberger on the back line. Mirsberger played a team-high 1,235 minutes last season while scoring one goal and recording two assists in all 13 starts.

“Mirsberger came up huge for us last season, he seemed to improve every game,” Bennett said. “I’m excited to see where he takes his game this season.”

Last season, Hallwood posted a 7-2-2 record in his first season with the program after transferring from NCAA Division II  Gannon University.

Hallwood’s 50 saves and .862 save percentage last season ranks No.2 all-time at MU. Hallwood also recorded six clean sheets throughout the season which ties him with Mike Dietrich Class of 1985′ for 10th all-time in career shutouts in program history.

“As well as we played last year defensively, I think there’s still room to improve, especially with my game,” Hallwood said. “My goal this year is for 50% clean sheets in the games I play this year as well as increasing my save percentage.”

For Hallwood, this will be the England native’s first full season with Marquette fans cheering him on at Valley Fields.

“I’m very excited to play in front of our fans for the first time at home this season,” Hallwood said. “They make a massive difference when it comes to the atmosphere of the game, and they will only make us play better.”