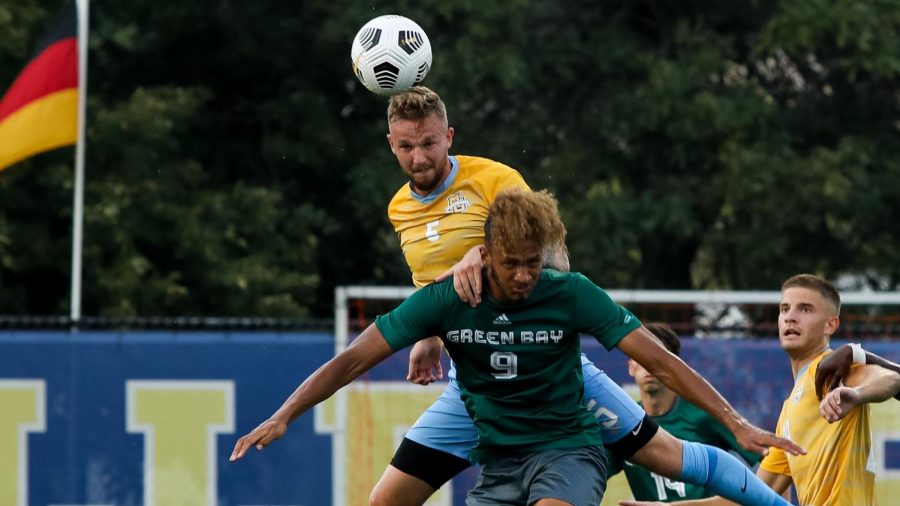 “You know, I had forgotten that it was hanging out there last year, I really had. I really haven’t considered it, obviously now that I look back, it’s one for the history books, probably 15 years from now I’ll look back and I’ll say ‘that was good’,” Bennett said. “But the most important thing was winning, playing a certain way and just getting as many players in as possible. The 100th win was nice but the win was even nicer”

In the 27th minute, first-year midfielder Edrey Caceres sent a corner kick into the box giving MU an early chance opportunity. Then redshirt sophomore defender Harvey Read finished with the header to give the Golden Eagles’ a 1-0 lead.

It was Read’s first career goal at Marquette.

“It’s a great feeling to get on the mark and get one in the back of the net and help the lads win,” Read said.

Then just before halftime, Marquette added to their lead.

Redshirt first-year defender Jonathan Robinson fired one into the back of the net from just outside the 18. It was also the Gurnee, Illinois, native’s first career goal.

The Phoenix recorded their first shot of the game in the 67th minute but redshirt junior goalkeeper Chandler Hallwood came up with the glove save to hold onto the shutout.

It was the lone shot of the night that Hallwood would see.

“It’s always nice not to do anything, but I like to get a lot of saves, get my numbers up, it was one of them nice 1-0 win,”  Hallwood said.

Bennett mentioned he was pleased with Marquette’s defensive efforts, especially with the graduations of former centerbacks Manuel Cukaj and Oliver Posarelli.

With the clean sheet victory, MU now leads the all-time series vs UWGB 4-1-2.

“It’s such a quick turnaround in college soccer, you cannot dwell on either a victory or a tie or a loss,” Bennett said. “It’s easier to critique then criticize from a coaching standpoint when you’ve won, so it will probably be a lot more critiquing then it will be patting on the back because we’ve got a team of really happy people that are just going (to) go to the locker room and sing.”

This article was written by Jackson Gross. He can be reached at jackson.gross@marquette.edu or on Twitter @JacksonGross6.