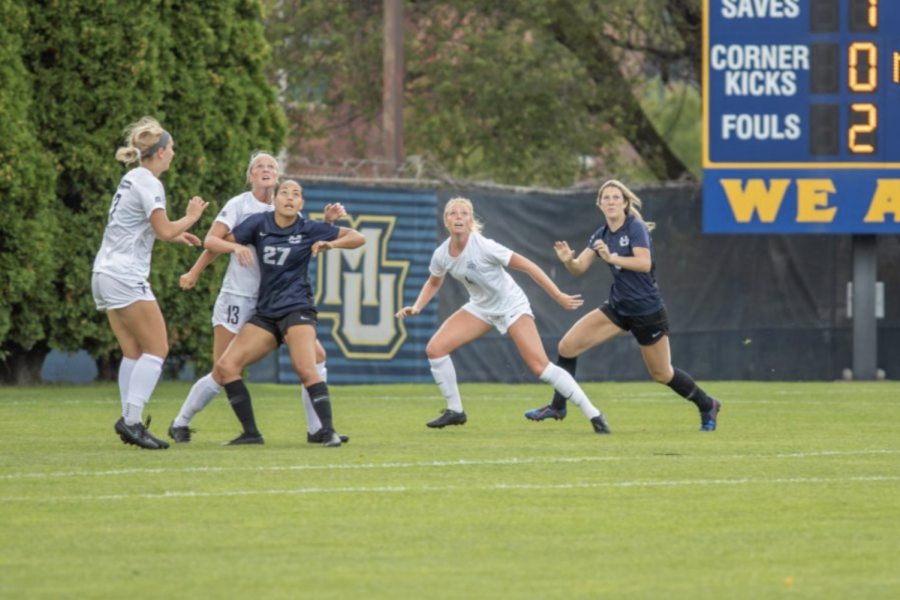 Marquette Women's soccer, among many other sports, are beginning to train for their upcoming seasons. Marquette Wire stock photo

For many college students, summer is a time spent relaxing with family and friends after a long and taxing school year. But it’s a much different story for Marquette student-athletes, as they use these summer months as a time to get back to the gym and begin training for their upcoming seasons.

Like many things, COVID-19 changed how each of Marquette’s 14 sports teams were able to train during the summer of 2020.

“We all kind of had to take it one step at a time, not only the players but the coaches too,” Women’s soccer senior defender Bonnie Lacey says. “We had to be pretty flexible with the different rules and regulations.”

Since each state had different rules and regulations, Marquette’s trainers were forced to come up with multiple options for their off-season programs for their respective teams.

Assistant director of sports performance Emily Jacobson referred to the options she came up with for her three teams — women’s soccer, men’s soccer and volleyball — as “Band-Aid situations” or “Band-Aid fixes.”

Lacey, who lived with five of her teammates in Milwaukee last summer, says that because they did not have access to a weight room, Jacobson had them using soup cans as weights instead.

From living in isolation, adhering to restricted state guidelines and hopping on weekly Zoom calls, there came many new challenges for athletic training.

“It was difficult because you didn’t have all your teammates behind you, motivating you and cheering you on every step of the way,” women’s basketball senior guard Chloe Marotta says.

Women’s soccer head coach Frank Pelaez mentioned that while his players were training on their own, he was reading up on how to coach during a pandemic.

“I was trying to prepare myself to play and get everyone prepared as much as I possibly could,” Pelaez says. “It wasn’t like ‘OK, let me look for a starting lineup’ because you don’t know what you’re going to get.”

Pelaez emphasized preparing for the unknown when it came to implementing his playbook for the team.

“I kind of said to myself, ‘I’m going to try to train them all the same and try to teach everyone different positions just in case one goes down or 15 go down,’” Pelaez says. “I don’t get to pick and choose positions when it comes to getting contact traced.”

When teams joined at the start of the fall semester, they went through “introductory activities,” which Jacobson says was the hardest thing coming out of the pandemic.

“One of the biggest things I noticed was when I got back on the field, even just kicking a soccer ball in a group setting, felt so different,” Lacey says. “We were all super sore in places we had never been before because we had never taken a few months off from soccer. That’s just never happened in our lives.”

The BIG EAST Conference announced Aug. 12, 2020, that the fall sport season would be postponed until the spring due to the unprecedented and continuing impact of the COVID-19 pandemic.

With the postponement to the spring semester, turnaround between seasons is now quicker than usual.

An example of this is the men’s soccer team, which finished its 2020-21 season May 6 when they fell to Indiana in round 32 in the NCAA Tournament and went right into preparation for the 2021 season, which will begin in August.

On the positive side, Jacobson says less time away means athletes will be closer to the “style of play” that is wanted by her colleagues and herself, but Jacobson also emphasized the effects it could have on athletes.

“It’s going to be a condensed season,” Jacobson says. “You’re seeing a lot of professional teams with condensed seasons running into some potential injury risks and problems. We’re trying to avoid that.”

With volleyball ending its season in April, Volleyball head coach Ryan Theis says he isn’t worried about the turnaround between seasons, but about something else.

“I’m more concerned about, are we in the summer getting physically ready to endure a preseason where we play three matches a weekend?” Theis says. “We’re going right back full bore because that’s what every team is scheduling and doing.”

However, for men’s soccer senior defender Alex Mirsberger, he says he did not change his individual offseason program.

“Honestly, coming off the spring season I was pretty fit, so in my mind I was just thinking to myself ‘I’m going to maintain that fitness just a couple more months until we are back into season,’” Mirsberger says.

As restrictions continue to ease with more vaccines being distributed, summer training on Marquette’s campus continues to loosen up.

“We’re getting a lot closer (but) I don’t know if we’re able to be back to exactly how things were before,” Jacobson says. “Our workouts and our workout facilities no longer require the use of a mask. At the same time, we’re still encouraging social distancing, we’re still having great sanitation.”

Along with no longer requiring face masks, Jacobson says the other biggest change in Marquette’s workout facilities are that they no longer have a capacity limit.

“I’m just looking forward to getting access to Marquette’s facilities and fields, and being able to practice with my teammates again,” Mirsberger says. “Last summer everything was closed, so I was just doing workouts in my home gym, but now that the weight room and fields are open it’s just about making use of my resources.”

With a normal summer, many summer leagues have been able to return to normal.

Pelaez says almost 90% of his team are playing with summer teams.

Meanwhile, for teams like women’s basketball, the loosened restrictions have allowed team workouts to happen inside the Al McGuire Center.

“Right now, everything is kind of back to normal and it feels really nice,” Marotta says. “We’re really looking forward to building more chemistry this season as we can be together more.”

This story was written by Sam Arco and John Leuzzi. They can be reached at sam.arco@marquette.edu and john.leuzzi@marquette.edu or on Twitter @sam_i_am119 and @JohnLeuzziMU.