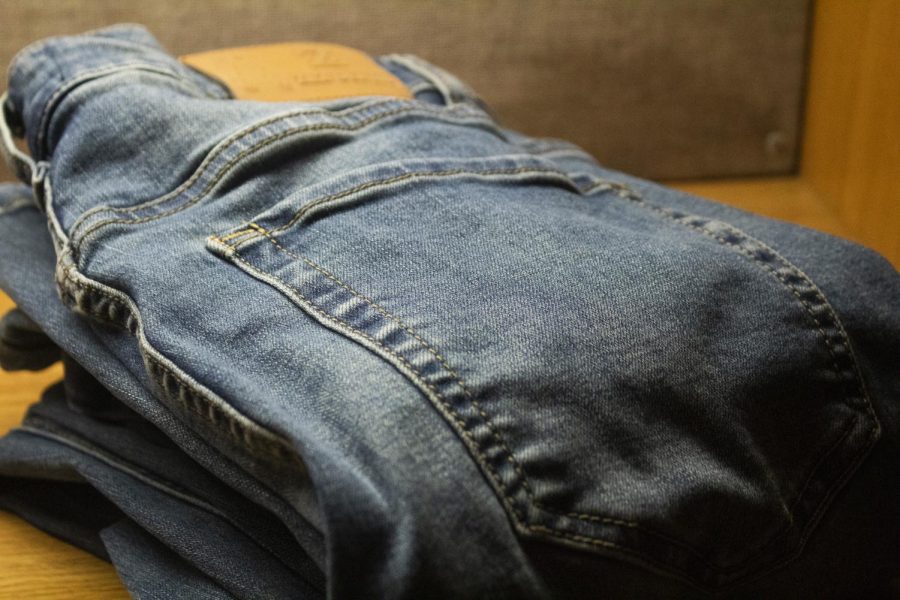 “Sexual assault is a very serious issue in our society, but even more so on college campuses,” Nicole Deacon, a graduate student, said. “About 13% of college students experience some sort of non-consensual sexual contact while in college.”

“The court decided that the man was not guilty because the jeans that this young woman was wearing were too tight for him to get off by himself, so she must have helped him remove them, which implied consent,” Deacon said.

A day after this Supreme Court decision, the women members of parliament wore jeans to protest the decision.

“This event sparked a movement to show support for survivors of sexual assault around the world, and Marquette is a big supporter of this initiative,” said Deacon.

Marquette’s Denim Day extends beyond simply wearing jeans, as Deacon teamed up with other employees in the Student Wellness Center to put together a display of over 100 pieces of denim in Central Mall.

“We gave out disposable denim masks, stickers, pins, and candy to anyone who stopped by our display,” Deacon said.

Tables were also staffed with Wellness Peer Educators to hand out resources and educate students on the history surrounding Denim Day.

The day then wrapped up with a virtual Speak Out at 7 p.m. on Teams, where Deacon said students had the opportunity to “hear from student survivors, resources on campus, and to ask any questions about how to get support on campus.”

Olivia Ward, a senior in the College of Nursing, said she continues to wear denim on this day as a “stance in solidarity.”

Also being a member of Alpha Chi Omega Sorority, Ward notes how her sorority’s philanthropy and sexual violence go hand-in-hand.

“Alpha Chi Omegas philanthropy is domestic violence awareness, which can go hand-in-hand with sexual violence,” Ward said. “As a sorority, we try to stand up and be strong women for others.”

However, in order to change the culture surrounding sexual violence, initiatives must extend beyond sorority life, as Robby Christiansen, a sophmore in the College of Engineering, said fraternity “norms” must change.

According to a 2018 longitudinal study by Rutgers University, individuals who were interested in fraternitys scored higher on “proclivity to perpertrate sexual aggression and some rape myths than non-interested nonmembers” due to the social groups reinforcement of male dominance and control.

“The long depressing history of sexual assault being associated with fraternity life and ‘frat parties’ is upsetting,” Christiansen said. “However, with proper accountability and strict enforcement of character development, hopefully, this can soon change.”

For Christiansen, Marquette’s Denim Day was a step in the right direction as the “high” statistics surrounding female college students who don’t report incidents of sexual assault is “upsetting.”

“This is an issue survivors don’t always feel comfortable talking about and people need to be aware of things to look for and actions that can be taken in order to make the campus a safer and more comfortable place for everyone,” Christiansen said.

Individuals looking for support and assistance regarding sexual assault, relationship violence, stalking or sexual harassment should contact Advocacy Services. Advocacy Services is a confidential resource that, according to Marquette’s website, “will provide support regardless of whether the victim chooses to file a formal report with law enforcement or pursue a complaint through the university’s Title IX complaint process.”