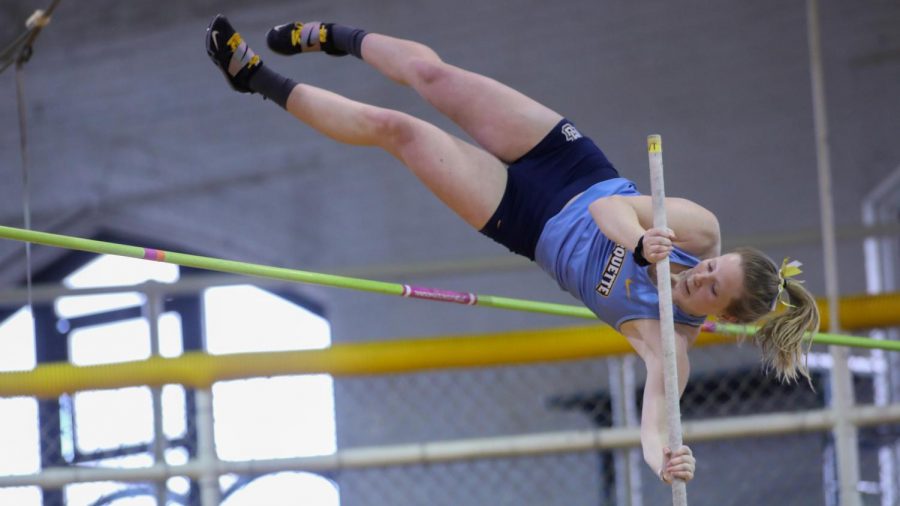 The Marquette track and field teams are closing out the regular season and shifting gears toward the BIG EAST Championships hosted in Geneva, Ohio from May 14-15.

After successful back-to-back home meets for the Golden Eagles, the team is finding its groove at the right time before the postseason hits, as several squad members have recorded school records over the past month of competition.

Senior Brielle Buechler set a new school record April 17 in the pole vault after clearing a height of 12-8.75. Buechler’s record-breaking performance broke the previous mark of 12-8.25 set by Julie Clayton in 2018.

One week prior, graduate student Madison Marko had a career day April 10 as she recorded personal bests in the 100-meter dash, 200-meter dash and in the long jump at the Hurricane Alumni Invitational hosted in Miami. Marko’s career jump of 19-3.5 landed her a first-place finish and is good enough for fourth all-time in school history.

Performances like these were one of the main reasons Marko decided to come back for a fifth year after last season was abruptly canceled due to the COVID-19 pandemic.

“I just really wanted to compete with my teammates for another season, and I didn’t want to regret not using my extra year of eligibility,” Marko said. “This season I’ve actually ended up running and jumping better than I ever have, which I was not expecting coming off a year of not competing, but that just makes it that more exciting.”

At the same meet, senior Joe Keys collected six personal bests en route to a first-place finish while breaking the school record in the decathlon with 7,537 points.

The previous school record was held by Matt Piekarski, set back in 2006. He held the record for almost 15 years with a mark of 7,236 points.

Although it was a great feat accomplished by Keys, he’s hoping for even more success come postseason time.

“My main goal this season is to make nationals and reach for the Olympic Trials, and I knew the record would come en route of those because I would have to hit that mark before qualifying,” Keys said.

As of right now, Keys’ record-breaking mark has him in a good position to reach his goal and qualify for the NCAA Outdoor Championships set for June 9-12 in Eugene, Oregon. The NCAA takes the top 24 marks set over the season from schools all over the country to qualify for the decathlon.

“The most important thing for me is to just stay healthy and to continue to train and get better every day,” Keys said. “Going forward I know everything will come together if I just keep working hard.”

This year, competition at the BIG EAST Championships will be even tougher with the addition of the UConn Huskies back in the mix.

“This year’s BIG EAST Championships will definitely be competitive and a lot different than we’ve seen in the past just because of everything that’s happened this year,” Marko said. “If everyone performs like I know they’re capable of doing, we can do some pretty big things.”