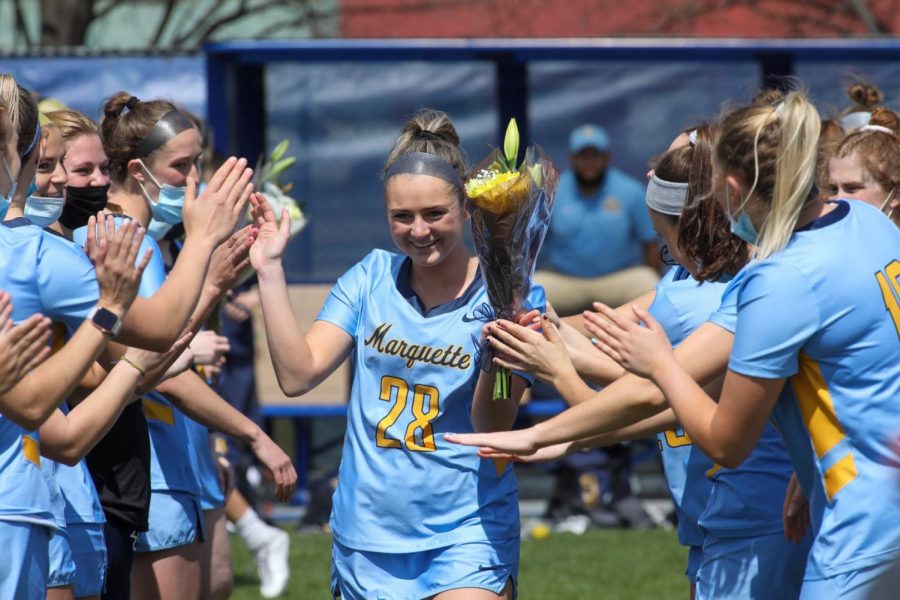 The Marquette women’s lacrosse team completed the season sweep over Butler, as the Golden Eagles defeated the Bulldogs 16-10 Sunday afternoon in Indianapolis to close out the 2021 spring season.

The Golden Eagles (7-9, 4-6 BIG EAST) end the regular season with back-to-back wins against the Bulldogs in a matter of days as Marquette dominated Butler 18-5 Friday afternoon, ending its three-game losing streak in the process.

Marquette was led by a trio of attackers who all recorded hat tricks. Senior Lindsey Hill finished the afternoon with four goals and one assist to wrap up her Marquette career while her counterpart Megan Menzuber also tallied three goals in her last game as a Golden Eagle.

Junior Shea Garcia also joined in on the fun and recorded her second hat trick of the weekend against Butler.

Despite Marquette jumping out to a quick 5-0 lead, the Bulldogs (1-11, 0-10 BIG EAST), who were in search of their first BIG EAST win of the season, wouldn’t let the Golden Eagles off that easy as they responded with four goals of their own and eventually tied the game 7-7 at half.

The two teams exchanged goals back-and-forth in the second half before Marquette went on a 4-0 run to end the game, while also holding the Bulldogs scoreless for the last 10 minutes of action.

Despite the win, Marquette’s 2021 season comes to a close as the team failed to qualify for the BIG EAST Tournament with only the top four teams in the standings advancing to the BIG EAST semifinals.