After playing sports her entire life, Steiner battles back from injury in redshirt first-year season 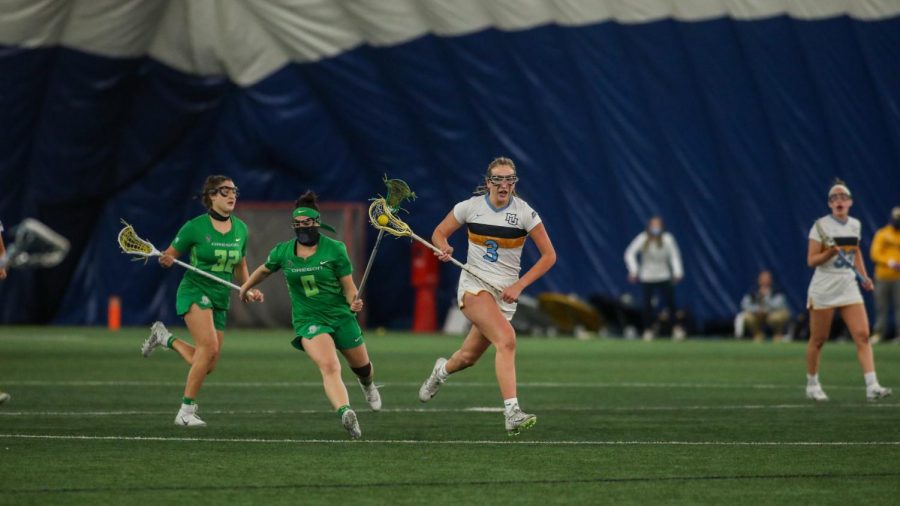 Leigh Steiner (3) runs with the ball in her crosse during Marquette's 16-4 win over University of Oregon Feb. 26. (Photo courtesy of Marquette Athletics.)

For redshirt first-year Leigh Steiner, sports have always been part of her life. Her father played football, basketball and baseball in high school. Her mother went on to play basketball at South Dakota State. Both her brother, Grant, and sister, Erin, play sports as well.

Growing up in Eden Prairie, Minnesota, she played quite a few sports herself, including basketball, lacrosse and soccer. Steiner picked up the sport of lacrosse from her sister. She grew up and played with her future teammate at Marquette, sophomore defender Kate Pearson, as kids, as they lived just 10 minutes from each other.

Steiner would carry on playing both lacrosse and basketball in high school at Holy Family High School in Victoria, Minnesota. She had a decorated career in both sports, being named team captain and team MVP her junior and senior seasons in addition to earning five letters in lacrosse. For basketball, she was also a two-time team MVP and a Minnesota Miss Basketball finalist in 2019. At 5-foot-11, she was the team’s point guard during her time at Holy Family.

“I definitely miss it, it was super fun, we had a really fun senior season,” Steiner said. “We made it to state and my five best friends were on the team with me.”

Steiner missed her first season at Marquette due to a knee injury which happened in high school. While the physical aspect was tough to recover from, Steiner said that it was the mental aspect of coming back from an injury that was the much larger part of her recovery.

“A lot of people think it’s all physical, but the mental part of it is even bigger and I think it’s really about knowing that you put in the work,” Steiner said. “I spent the entire summer at a training facility in Minnesota. I had such great physical therapists and trainers there that really gave me the confidence in my knee and my strength again to be able to play.”

Even with all the work put in, Steiner said it was still scary during the first few weeks of practice.

“It’s really scary starting out, I definitely was not myself the first couple weeks of practice, so that’s why I decided to redshirt, but I think that knowing you put in the work, you did everything,” Steiner said. “With injuries they are very specific about everything you do, so knowing you follow through on that you just have to trust yourself.”

Head coach Meredith Black has really seen it all when it comes to injuries, and one of the ways she helps players recover is by keeping them engaged in the program.

“At the end of the day you want to keep them engaged in the program,” Black said. “Luckily for Leigh by the time she got to Marquette she was able to physically be able to play, so she could do enough that she didn’t have to sit there and not do anything.”

During her first year, Steiner was able to make some good friends, including fellow sophomore midfielder Emma Soccodato. The two met during a volunteering activity.

“We got a volunteering thing with the team and we ended up getting paired up to work this bouncy house for the kids and I remember being a little nervous but we ended up hitting it off,” Soccodato said. “From that moment on we were pretty good friends and then this year we just became inseparable. She lives next to me so we hang out almost every single night.”

With the two playing the same position on the field and being such good friends, it has paid dividends on the field for the Golden Eagles. According to Soccodato, it makes a big difference.

“It’s such a big difference,” Soccodato said. “When you are so close with somebody off the field and then you go on the field with them, they always have your back. I love playing with her (Steiner). We definitely have a huge connection … and on the defensive end I just know she’s always there if I get beat.”

Outside of lacrosse and friends, Leigh wants to be involved in real estate because of how she views math.

“I came in thinking I wanted to go into the science side, but I took a few classes and I realized I have more of a math brain, so my brother actually works in real estate,” Steiner said. “I love to use math to problem solve.”

Steiner specifically wants to work and focus on low-income housing after she gets her degree.

“There’s a company in Minnesota that works with the low-income housing sector, so I think if I could do something with that it would be really cool,” Steiner said. “I loved volunteering at homeless shelters in high school, that would definitely be my dream.”