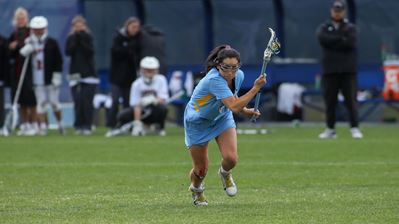 The Marquette Golden Eagles (6-9, 3-6) ended their three game losing streak after defeating the Butler Bulldogs (1-10, 0-9) in dominate fashion, 18-5, in Indianapolis.

The Golden Eagles were lead by redshirt senior attacker Megan Menzuber and junior attacker Shea Garcia. Menzuber collected five points and four goals, while Garcia had three goals and an assist for four points. Senior attacker Caroline Stellar also had a solid performance, as she took away four assists and a goal.

The Butler offense could not get anything going, as they score only five goals for the second time this year. Sophomore Campbell Connors, senior Karina Latsko, who had a hat trick and senior Madeline Hooks were the only players to score for the Bulldogs.

Marquette would finish with 33 shots on goal, compared to Butler’s 12. Marquette had a strong game clearing the ball, not missing a single clear all day, with perfect numbers completing 19-19.

First year mid-fielder Samantha Galvin scored two goals for the Golden Eagles, tripling her goal count on the year from one goal to three goals on the year.

In the net, senior goalkeeper Sophia Leva had a strong performance on the day for the Golden Eagles, with six saves on eight Butler shots. She was replaced by Jules Horning with just over 16 minutes left in the second half and she made one save, while allowing three goals on four shots from Butler.

Redshirt senior attacker Bridget Danko and senior midfielder and attacker Mary Dooley were able to score their first goals of the year in the second half for the Golden Eagles.

Marquette will take on Butler again on April 25 to finish out the regular season.

This story was written by Jackson Gross. He can be reached at Jackson.gross@marquette.edu or on Twitter @JacksonGross6.