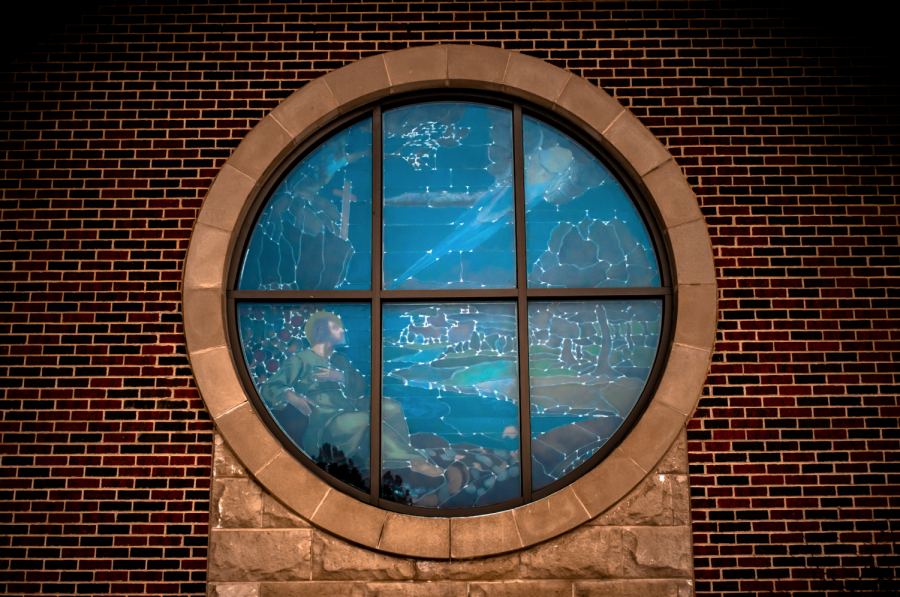 A protest was held outside of the Jesuit Residence April 19

Not even the wind of a cold April afternoon could stop the continuing protests and sit-ins that the Marquette Academic Workers Union has held over the school year, as the organization most recently held a sit-in Monday.

On the lawn outside of Jesuit Residence, members of the Marquette community adorned signs that read “No one gets fired” and “Marquette is not a business.” These slogans have become prominent in the continuing protests across the year ever since the university announced budget cuts that have lead to 39 staff members being laid off and not renewing the contracts of a “single-digit percentage” of nontenure-track faculty.

“Well, the Jesuits are an apostolate of the Catholic Church, and the Catholic Social Teachings are very clear that workers are entitled to a living wage and they’re also entitled to organize to attain living wages and benefits,” Stephen Beal, associate professor of classics, said. “We’re hoping that the Jesuits will assert their moral authority on campus. … Our message is for them today.”

Beal said members of the Marquette community have been trying to have a “real” conversation with administration, but felt at the same time as though they haven’t been acknowledged or taken seriously.

“I think we can say that one of the things that brings us all together is a concern about the direction the university is taking,” Peter Staudenmaier, associate professor of history, said.

Staudenmaier has been present at multiple protests this semester that have been urging the Lovell administration to be more transparent about a $12 million budget surplus as well as $23 million more in additional COVID-19-related financial aid.

Among general transparency about the university’s funding, the protests were calling upon the Jesuit community to heal a “fractured” Marquette community, according to a flyer with a list of demands that were handed out at the sit-in. These demands included ensuring that Marquette commits to its students and faculty of color by funding scholarships promised to the Black Student Council, re-engage with full funding, toward the university’s progress toward becoming a Hispanic Serving Institution, changing the Marquette seal, and encouraging the university to follow the Jesuit “just employment policy.”

So far, the university has made progress on becoming a Hispanic Serving Institution by increasing Hispanic undergraduate enrollment and has had active conversations in trying to change the University Seal.

The “just employment policy” was developed by the Kalmanovitz Initiative for Labor and the Working Poor. In this context, it ensures that Marquette’s unionized janitorial and food staff have “unobstructed” negotiations with the university, establish meaningful shared governance and a commitment to labor neutrality with Marquette graduate works and nontenure-track faculty, according to the flyer.

“We feel that … people matter more than property,” Staudenmaier said. “The current university leadership, I worry, has forgotten that point.”

Since these protests began in August as protests for safer working conditions, Staudenmaier said the process from its inception has been “inspiring” working with many people, some of who he never knew before.

“It’s been challenging, many of us feel like we’ve been heard very well,” Staudenmaier said. “But the inspiring part is bringing part very different parts of the university.”

One of the effects of cutting staff members and faculty is that it can lead to increased class sizes, something that members of MAWU in the past said can affect education in a negative way.

When class sizes increase, teachers in return have less time to spend with individuals students

Chris Crowley, a junior in the College Arts & Sciences, said that he has had positive experiences with “all” his professors at Marquette. He also was present at the sit-in.

“I feel like … maybe laying off people isn’t the right idea right now,” Crowley said. “It’s hard financially for everyone right now, people are getting cut … probably not the best move.”

The Marquette Wire reached out to the Office for Marketing and Communication for a comment on the matter but the university was unable to provide a statement.