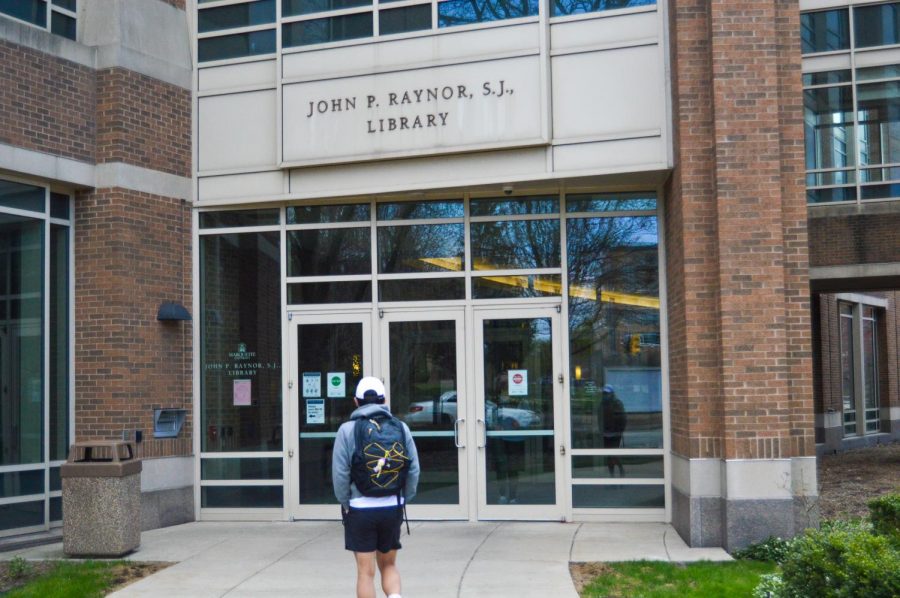 Marquette’s libraries are a big part of the MU campus. The Law, Raynor and Memorial Libraries located on campus not only provide academic resources but also allow students a place to study with others who are more knowledgeable about certain subjects.

Valerie Beech, a reference librarian, said Marquette’s libraries have many things that make them unique. One is the special collections and archives.

The one that is most original, Beech said, is the J.R.R. Tolkien manuscripts collection.

“We’re the only ones in the world that have his original papers and manuscripts,” Beech said.

William B. Ready, the director of libraries from 1956-1963, recognized ‘Lord of the Rings’ as a masterpiece soon after publication, before the series had gained popularity.

“Ready approached Tolkien in 1956 through Bertram Rota, a well-known rare book dealer in London. At the time, no other institution had expressed an interest in Tolkien’s literary manuscripts. After a relatively brief period of negotiation, an agreement was reached whereby Marquette purchased the manuscripts for 1,500 pounds (or less than $5,000),” according to Marquette’s website.

Along with this special collection, Beech said Marquette also has Dorothy Day papers, which includes lots of material on the Catholic worker movement and another big collection on the Bureau of Catholic Indian Missions, all of which she said are pretty special.

The Catholic Worker movement is a movement that focuses on faith-based actions for peace and social justice. The Bureau of Catholic Indian Missions was an institution that has a mission to protect and promote Native Americans in the United States.

Another thing Beech said is special to Marquette’s library is the Digital Scholarship Lab located in the lower level of Raynor.

The Digital Scholarship Lab allows students to use various editing software as well as check out various audio and visual equipment.

“We have so many resources, for so many students, for so many projects,” Claire Dinkelman, a research and instruction librarian, said.

Another resource is the staff at Marquette’s libraries.

Elizabeth Wawrzyniak, a librarian in the Digital Scholarship Lab, said those working in the library really make it special.

She mentioned part of this reason is that many staff members, including herself, are Marquette graduates who did their undergraduate or attended graduate school at Marquette. Because of this, Wawrzyniak says they have a great connection to Marquette.

“These people are people who loved it so much they came back to work here, and so I think that is one of the really great features about the library,” Wawrzyniak said.

Even for those staff members who don’t have an “educational connection to Marquette,” and who aren’t alumni, Wawrzyniak said they still make the library special.

Dinkelman also acknowledged that the workers, whether helping students with research or ensuring things in the library are labeled correctly, are a really dedicated group of people.

Dinkelman said another thing that’s unique to Marquette’s libraries are the programs they have for students.

An example Dinkelman spoke about was passing out snacks on the bridge between Raynor and Memorial during finals.

“You just see this long line of students waiting and it’s great. Library staff is on hand to help with that, handing out stuff and making sure the line is moving,” Dinkelman said.

Of course, with the COVID-19 pandemic, this event has not been able to occur, but, once everything goes back to normal the staff hope to continue such programming.

It’s with these small things that Marquette’s libraries are more than just a place to find books.

“Back in the day the library was really just a place to come and study,” Wawrzyniak said.

However, she said it’s become much more than that now, as students meet with friends, teaching assistants hold office hours, students have lunch on the bridge and people come to collaborate.

“The library (has) became sort of a place where (students can) get together, study, and build a little community amongst themselves,” Wawrzyniak said.