‘Antigone’ to be performed outside April 21-25 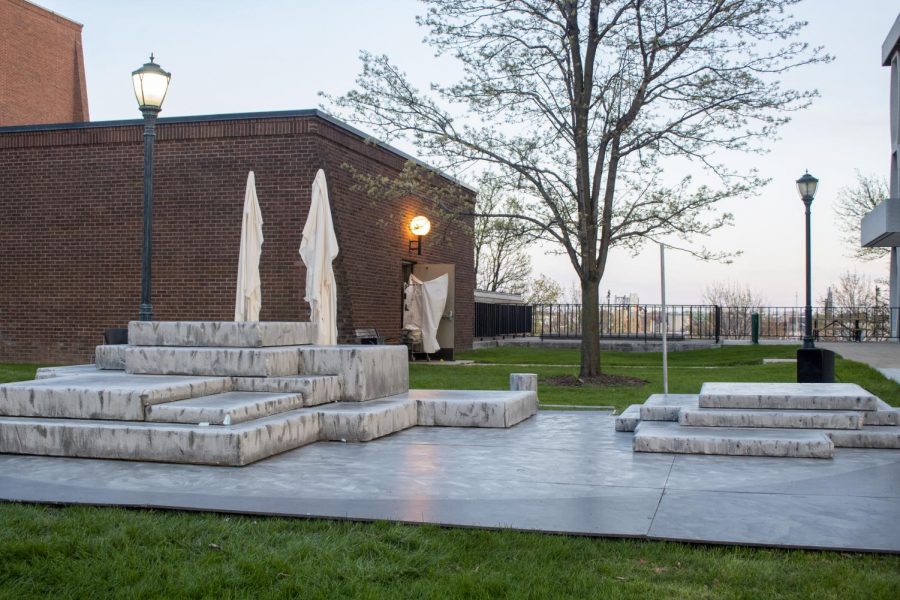 Students are performing a translated version of "Antigone"

When the COVID-19 pandemic first hit in March of last year, theater arts was one of the first programs to be postponed, and then canceled. However, one year later, Maaz Ahmed, a senior in the College of Communication, can now take a front-row seat to see his classmates and friends perform on an outdoor stage, live again.

“I walked into the theater because I got here a little early, and it kind of hit me,” Ahmed said. “I was like ‘oh my god I’m about to see live theater again.’ We’re actually seeing it in person. This is happening.”

This school year, Marquette University’s theater department adapted to a virtual learning and performance experience. Ahmed said it was tiring to constantly watch a computer screen or sit in the dark theater watching somebody record shows as they performed.

The department has worked to put on four different shows throughout the year, but ‘Antigone’ is the first play to be performed in person with a live, socially-distanced audience throughout the month of April.

‘Antigone’ is a Greek play originally by Sophocles, but the students are performing a translated version by Jean Anouilh. In the story, a young woman named Antigone, is faced with the dilemma of having to choose between her family’s honor and her own life.

Stephen Hudson-Mairet, an associate professor and chair of digital media and performing arts at Marquette, said this adaptation calls for a smaller chorus, but it’s still the story of Creon and Antigone that most people will recognize.

Hudson-Mairet said they had planned to open the season with “Mamma Mia” in October, but because it was difficult to socially distance for that show, they had to pivot, and changed their program to perform an original music revue, ‘Songs of Note,’ which was streamed for viewers to see. A revue is a theater act that combines unrelated songs, dance and monologue into one entertainment event.

“(‘Mamma Mia’) was figuring out as we went. Then we got better at it and our second show in November, we streamed ‘Dead Man’s Cell Phone,'” Hudson-Mairet said. “By the time we got to the third show, we had everything in place, which was a full set, full costumes, full show and we streamed that.”

Hudson-Mairet said they eventually decided that their cast needed an audience, and he began working with colleagues to figure out how to move the next show outside.

“(Antigone) made the most sense because this is about the only time of the year that we could do an outdoor show. It’s going to be a little chilly, but I think it’s going to be totally worth it,” Hudson-Mairet said.

He said this particular performance is a company model, so the students are challenged to work in a collaborative, artistic field in the space between Helfaer Theatre and Lalumiere Hall.

“It’s been a really interesting year,” Hudson-Mairet said. “I’ve been really impressed by how supportive everyone is of each other throughout this whole process, ranging from rehearsing inside at a social distance to figuring out how to build a set in the shop, and then bringing it out here.”

At every performance, students carry out all the parts to their stage design, set up and then take it back down and bring everything back inside after the show.

“(The students) have been doing a really good job of continuing the art form in a time when most theaters have shut down,” Hudson-Mairet said. “This is an opportunity for Marquette to see live theater that you can’t see anywhere else in Milwaukee.”

He said he is so proud of all of his students’ work every day.

“You have to be willing to take risks to be able to do theater at all, and the risk here is that, in the middle of April, it could be snowing right now,” Hudson-Mairet said. “In fact, two years ago, there was plenty of snow on the ground, so we just had to be prepared to react.”

Pia Russo, a junior in the College of Education, said she is very involved with the theater department because she hopes to be a teacher someday. “Antigone” was her first time being a stage manager.

As stage manager, Russo said she makes sure everybody is where they need to be at the right time, and facilitates the communication between the director, actors and designers.

“A lot happens,” Russo said. “There’s a lot of taking care of people that comes with it that I really appreciate. I like to joke that people always email me with their problems. I wake up and I have a lot of problems to solve. I have to be available, not 24/7, let’s say 20/7.”

Aside from all the hard work and dedication it has taken to plan the show, Russo said she has loved working with everyone and that socially distancing in ‘Antigone’ worked really well for them.

“There’s this enormous sense of space and the story is so important to ‘Antigone,'” Russo said. “It’s life or death for (Antigone), so having it be so big and having it outside, there’s this real feeling of epicness to it.”

Russo said one her favorite parts of ‘Antigone’ is the real ensemble feel because everybody has to work together to put on the show. She said all but two actors play multiple characters, and even one of those actors acts as a statue or helps to carry things on and off the stage, so everyone has their own unique role to play.

“I have never felt so ready,” Russo said. “This wasn’t our first plan, but the show feels really good. … When the first person walks up and takes their seat, I know my stomach’s gonna be flipping because I haven’t even seen live theater myself.”

Just like Ahmed, this is the first piece of live theater Russo is seeing in over a year.

“I’m really proud that we were able to make show,” Russo said. “It doesn’t even look like a COVID show, it looks like a real show and I’m really, really excited.”