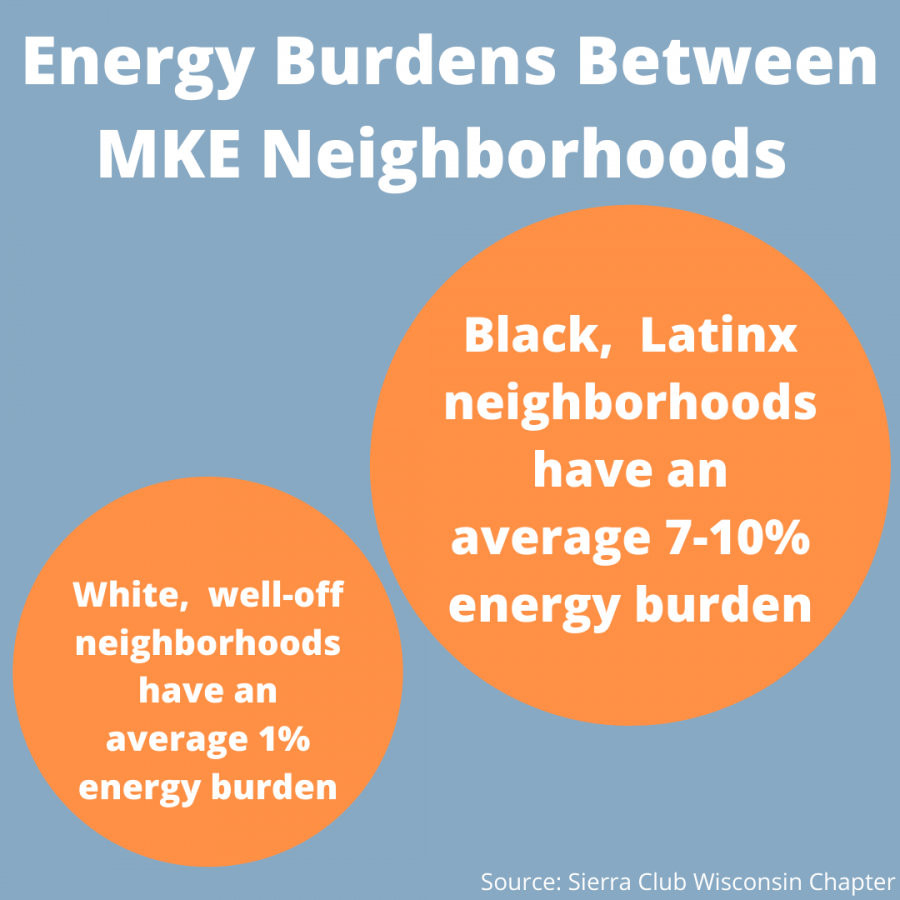 This story is part of an Opinions series called “One Planet, One Home.” In honor of Earth Day this year, we are taking a moment to draw attention to and discuss different environmental issues facing our local communities and our planet.

Energy is not a luxury: It is a basic human right. In Milwaukee, though, it is anything but.

A recent study from the Alliance for Climate Education, Black Leaders Organizing for Community, Citizens Action of Wisconsin–North Side Rising Co-Op, Sierra Club-Wisconsin Chapter and Voces de la Frontera released at the beginning of April shows that energy burdens are greater in Black and Latinx communities than on those living in predominantly white neighborhoods in Milwaukee.

Needless to say, energy burdens are a deeply rooted issue that requires a well-rounded understanding of Milwaukee’s past.

For starters, Milwaukee is the most segregated city in the United States. As the Alliance for Climate Educations study acknowledged, this is a result of redlining. Beginning in the 1930s, redlining became a practice used by the real estate industry resulting in a different and changed sociocultural environment throughout the entire nation.

After decades of fighting against this oppressive system, the Civil Rights Act of 1964 and the Fair Housing Act of 1968 prohibited discrimination in housing opportunities based on race. Unfortunately, the prohibition of housing discrimination was not an easy fix. The effects of racial practices like redlining have left a stain on Milwaukee’s neighborhoods, reducing opportunities for generational wealth accumulation among minority populations. This has manifested in a multitude of problems, one of them being the energy burdens in Black and Latinx communities.

Energy is necessary for survival, especially during extremely warm summers and cold winters in Wisconsin — a climate that is changing. We need energy for almost everything we do. Storing food, cooking and cleaning, lighting and heating and cooling all require energy. Yet for Black and Latinx communities, necessities like these come at high risks.

High energy burdens can threaten a household’s ability to pay for energy, risking disconnections and forcing people in these communities and people of color to make difficult choices to meet costs of living. So many families have to decide between paying energy bills and buying food. It is horrifying that there are families who have to decide between keeping their electricity and nourishing their bodies, or keeping a roof over their heads or buying medication that is needed to treat a condition.

According to the Alliance for Climate Education study, addressing the energy burden issue requires a cooperative approach among public and private sector decision-makers, led by those most impacted to address their direct needs and concerns. Increasing investments in energy efficiency and affordability programs and targeting these initiatives to the communities that experience high energy burdens as laid out in this report is an important and necessary way to address the clear disparities. These programs can help reduce high energy burdens, make energy bills more affordable and improve health disparities worsened by COVID-19.

As Earth Day approaches, it is essential to acknowledge energy burdens and their effects on marginalized communities. We cannot continue treating energy as a luxury and treat those living in energy-burdened neighborhoods like numbers. This issue affects thousands of families, thousands of people being neglected of a basic human right. So, moving forward, we need to put more energy into the energy crisis that has plagued Milwaukee.