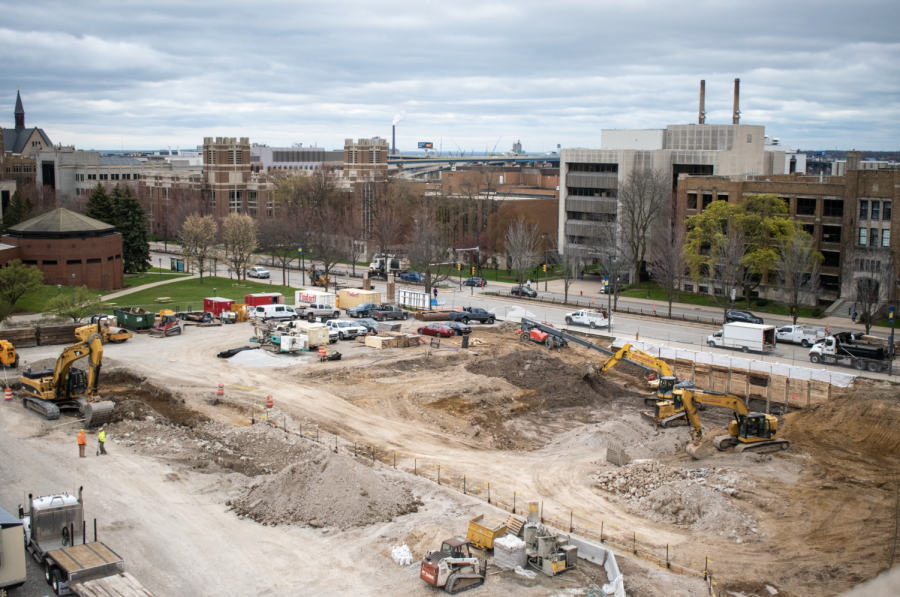 The new College of Business Administration building is being built on the green space next to the Alumni Memorial Union.

As the spring semester is coming to a close, the construction for the new business building is picking up. For some students on campus, it’s exciting to see the construction, whereas for others, it’s a loud wakeup call.

Joey O’Connor, a senior in the College of Business Administration, talked about how his experience with the construction, especially because he lives in the Ardmore, an apartment complex right across the street from the new business building.

“Construction starts at right about 7 a.m. … it’s kind of like my built-alarm clock,” O’Connor said.

O’Connor said he has also had to reconfigure his walking route since some of the sidewalk has been blocked off. He also said he is excited for upcoming business students to experience the new building, especially because he is graduating this year.

O’Connor also said he has heard from some students that they will miss the green space.

“A lot of people wish we could’ve held on to that green space … those are the kinds of thoughts I heard,” O’Connor said.

Alex Kimmet, a senior in the College of Engineering, said he also will miss the green space, especially because he and his roommates would utilize it.

“Last semester we played frisbee a lot there … this semester, before they closed it down, we went and made some snowmen when it was really snowy,” Kimmet said. “It definitely stinks that they are using the greatest green space on campus and turning it into a building.”

Kimmet said that though the construction has woken him and his roommates up a few times, he is a civil engineer and enjoys seeing the progress on what they are building.

“I’m kind of biased in that I enjoy looking out the window every day, seeing what goes on… our windows are pretty decent at blocking out the noise, so the noise doesn’t effect too much,” Kimmet said.

Kimmet also said the construction has made it harder to walk, especially since the blocked sidewalk is where he typically walks to class with most of his classes being either in Olin Engineering building or the Engineering Hall (E-hall), a similar issue as O’Connor.

Justin Zwiefelhofer, a junior in the College of Engineering and roommates with Kimmet, lives in Campus Town East, an apartment building located on wells street and said construction, to him, has not been too bad.

“I personally haven’t heard anything from on-site, but when dump trucks are coming from the site, it can get pretty loud and it can kind of keep you up,” Zwiefelhofer said.

Zwiefelhofer said the last time he was around this kind of construction was during the teardown of McCormick, which is the site of the new business building. He said he had classes close by where you could hear the wrecking ball hitting the building.

“It is kind of annoying that the whole east side of the sidewalk is blocked … that gets pretty annoying, and it can get pretty congested,” Zwiefelhofer said.

He said that it probably would have been nice for them to wait until 8 a.m. to start. He also gets that construction is a scheduled thing so if they start earlier, they can get done earlier.

Zwiefelhofer said he thinks a compromise could have been to start at 8 a.m. for the remainder of the school year and then start at 7 a.m. when classes are done.

The building is scheduled to be completed around Christmas of 2022.