Golden Eagles get blown out in BIG EAST semifinals 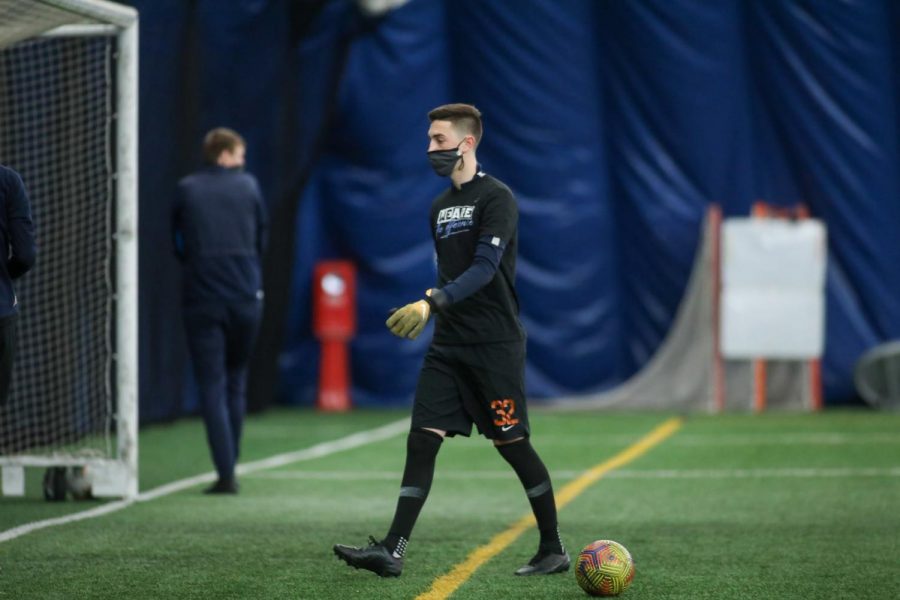 Redshirt sophomore goalkeeper Jackson Weyman (32) warms up before a match against Xavier March 17. He started the BIG EAST semifinal match against Seton Hall this afternoon (Photo courtesy of Marquette Athletics.)

First-year midfielder Mattias Sundell and junior defender Maurice Williams scored the early goals for Seton Hall (9-1-3, 5-1-2 BIG EAST), as they connected with the back of the net against redshirt sophomore goalkeeper Jackson Weyman. Weyman got the start on Thursday after playing just 45 minutes of the regular season. He had not seen time since Feb. 3 against Loyola-Chicago.

The Golden Eagles were outshot 6-4 through the first 45 minutes of play. They also were not able to get any opportunities from the corner, while the Pirates had three. The first half was a feisty one, as both squads combined for 24 fouls. Only one card was issued before the break, as Marquette defender Jonathan Robinson picked one up in the 38th minute.

It was more of the same story following the break, as Williams scored his second goal of the day in the 59th minute. Just over a minute later, Sundell set up junior forward CJ Tibbling for his first goal of the day to push the Seton Hall lead to four.

Marquette did show some fight, as redshirt junior forward Sam Thornton scored the first goal of his career in the 73rd minute to put MU on the board.

After being named BIG EAST Freshman of the Year, first-year forward Beto Soto was held to three shots, two of which came on goal. All-BIG EAST First Team selection Lukas Sunesson was neutralized by the Pirate defense. The junior forward took just one shot on the afternoon after scoring a team-high six goals during the regular season. He was able to record the assist on the team’s lone goal of the day.

Weyman played all 90 minutes, allowed four goals and tallied one save. On the opposite end, senior goalkeeper Andreas Nota made six saves and allowed just one goal.

The Golden Eagles were outshot 12-11, but put two more shots on goal than Seton Hall. MU also had 19 fouls, which was one more than the Pirates.

Marquette will now await a bid to the NCAA Tournament. The first round is slated to begin April 29 in Cary, North Carolina.