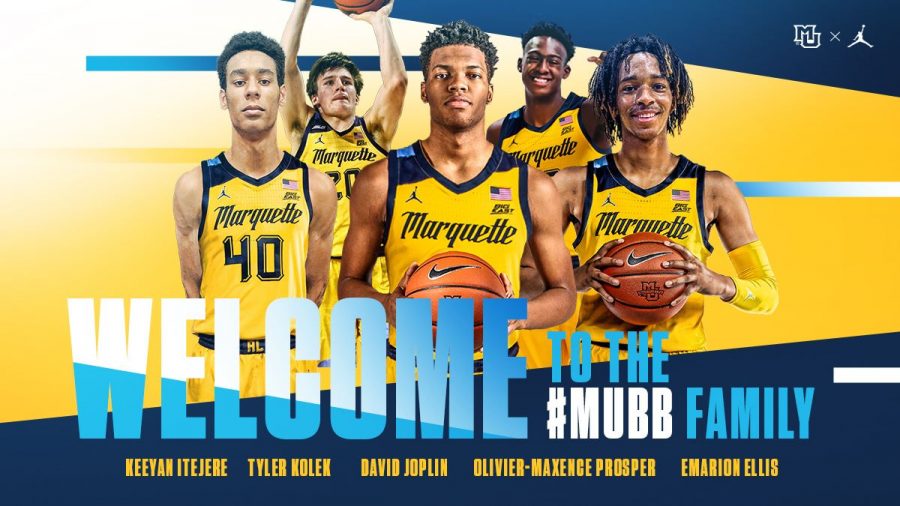 Additionally, two transfers have committed to the program, guard Tyler Kolek, who is leaving George Mason, and forward Oliver-Maxence Prosper, who left Clemson. Smart said that he expects the transfers to get a waiver to play right away next season.

These five newcomers are in addition to high school guards Kameron Jones and Stevie Mitchell, who have remained committed to the program after originally signing with Marquette under Steve Wojciechowski.

“We knew with the coaching change that there was some work to be done in terms of managing our roster,” Smart said. “Trying to add pieces that may fit with who we want to be, we’re excited about the progress we’ve made, but we’re not done yet.”

Joplin, the Brookfield, Wisconsin native, announced his commitment to Marquette on Wednesday morning. The 6-foot-7 forward is a four-star prospect and is ranked 74th nationally in his class by 247Sports.

“We would have re-committed to Joplin no matter where he was from, but it was serendipitous that he is from here in the Milwaukee area,” Smart said. “He knows that I trust and believe in him, and there’s a positional need for him here.”

Joplin and the other two forwards in Prosper and Itejere could have key roles next season, as the program will be losing some size in Theo John and Jamal Cain, who entered the transfer portal, and the potential loss of Dawson Garcia, who is testing the NBA Draft process.

The 6-foot-8 forward, Prosper, from Mexico was a four-star prospect out of high school, but averaged just 9.7 minutes per game with Clemson last season. Smart said he’ll look to Prosper in many different positions on the court.

“He’s very live bodied and athletic. It’s exciting because I think he’s going to continue to get stronger,” Smart said. “He’s gonna be a guy who makes a good impact on our program from day one.”

Finally the tallest of the group, 6-foot-9 forward Keeyan Itejere, from Raleigh, North Carolina, is a three-star prospect. Smart is impressed by his notable length.

Smart mentioned for both Joplin and Itejere that strength will be the key factor in their development.

“If we can get Joplin into elite shape, he’s really going to be able to affect the game in different ways,” Smart said. “For Keeyan, he’s thin. The first thing after he signed was get on a zoom with Todd Smith (Marquette strength and condition coach).”

If Garcia were to leave for the NBA, the forwards remaining from last year’s Golden Eagle team would be Justin Lewis and Oso Ighodaro. Smart said that both have looked good in the workouts he’s had with the team to this point.

“I’m really excited about their growth, and I’m proud of Ighodaro and how he’s grown since we were recruiting him at Texas,” Smart said. “Justin’s been really good, i’m excited about his potential and the type of player he can become.”

Onto the guards, 6-foot-3 transfer from George Mason, Tyler Kolek, is originally from Cumberland, Rhode Island. The left handed shooter averaged 10.8 points, 3.6 rebounds and 2.3 assists, while connecting on 2.4 threes a game at a 35.8% clip.

“He’s about the things that go into winning,” Smart said. “He has a chip on his shoulder, and he can really shoot the basketball, i’m really excited about him.”

Ellis is a four-star recruit from Davenport, Iowa. The 6-foot-5 guard just missed the 247Sports top 100 ranking in his class, at 103 in the nation. He averaged 18.1 points, 5.9 rebounds, 4.1 assists and 2.1 steals a game in his senior season at Assumption High School.

“He’s the youngest of the guys we’ve signed, really young for his grade, and he’s really on a great trajectory,” Smart said. “Has good size, can pass the ball and is very smooth with the ball. He’s got a really bright future.”

Smart also spoke about Stevie Mitchell and his conversations with him since he took over as head coach. Mitchell, a four-star, 6-foot-2 guard who is ranked No. 93 on ESPN’s Top 100 list for the 2021 class.

“We’ve had great conversations, I’ve really enjoyed getting to know him talking about basketball and stuff not related to basketball,” Smart said. “He told me that he just wants to win, and that’s really exciting. He absolutely fits into what I believe.”

As Smart said, the work on the roster is not done, however, the roster does currently stand at 14 scholarship players, with 13 being the maximum. Garcia’s decision to either go to the NBA or remain in college, as well as other players potentially transferring will have an impact on the finalized roster for next season.

Smart also announced that the team’s first game of next season will be played Nov. 9.