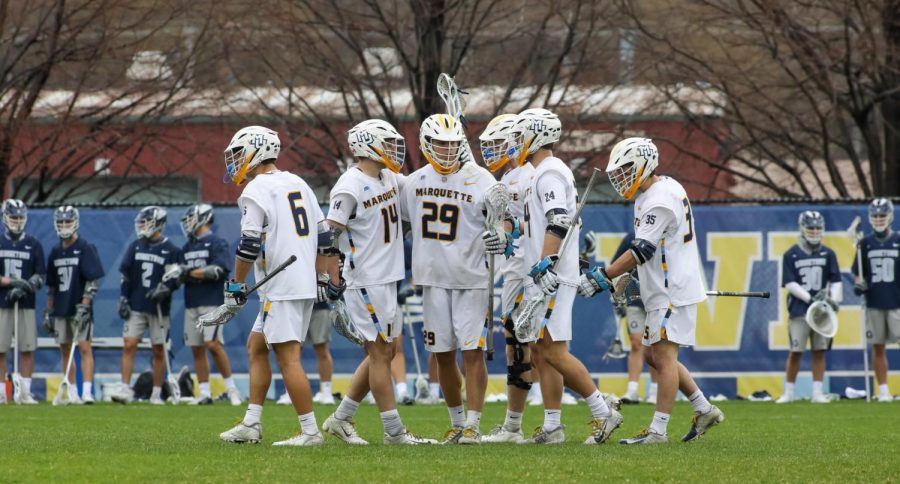 Seven different Golden Eagles were able to find the back of the net, and redshirt first-year attacker Devon Cowan posted a hat trick in the 9-8 win over the St. John’s Red Storm (1-6, 0-6 BIG EAST). Cowan also added an assist on redshirt first-year defender Mason Woodward’s goal in the second quarter.

Both Woodward and redshirt first-year midfielder Chris Kirschner tallied their first goals of the 2021 season. Kirschner had 16 goals and 20 points last season, both of which were team highs.

After St. John’s graduate student midfielder/attacker Thomas Martello scored the first goal of the game, the Golden Eagles responded with three unanswered scores to jump out to an early 3-1 lead. The Red Storm responded with two goals of their own, and then both teams went back and forth for the remainder of the afternoon. Neither team was able to take command of the game, as MU’s two-goal advantages in the first and third quarters were the largest leads of the day.

Marquette had plenty of opportunities to score and outshot St. John’s 54-34. The Golden Eagles also put eight more shots on goal and won 15 of 21 faceoffs.

Marquette will begin its three-game road trip to close the regular season with a matchup against the Providence Friars April 17 at 10 a.m. Central Standard Time. The game can be streamed here.