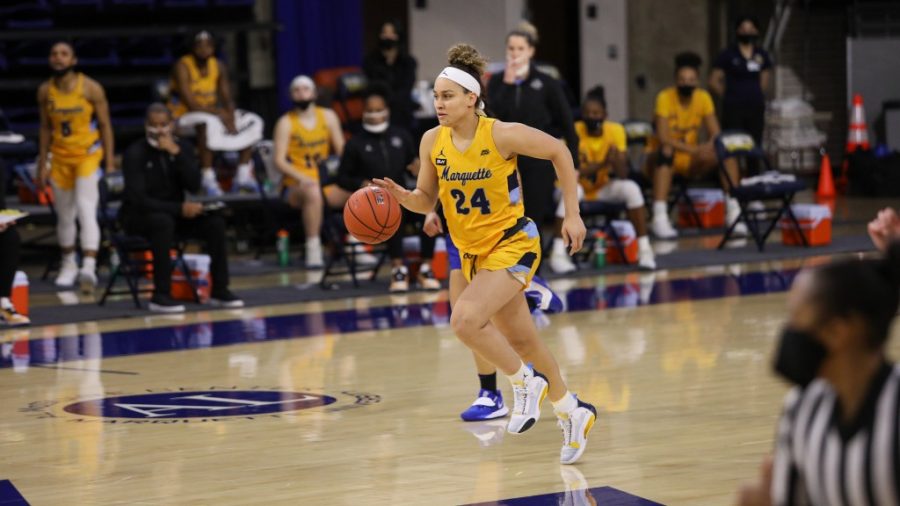 On a chilly Sunday afternoon, Kim Adams sat down at the broadcasters table inside the Al McGuire Center with her game notes placed in front of her as the top two teams in the BIG EAST got ready to square off: Marquette and DePaul.

One of the key matchups of the day would be Selena Lott versus Chante Stonewall.

Lott’s consistency and versatility on the court made Adams first fall in love with her game. That same love would soon be reaffirmed in Marquette’s 90-83 upset win over DePaul.

“(Marquette) just ran DePaul out of the gym,” Adams said. “(The) team as a whole played really well but I would assume if I went back and checked that box score, (Lott) had a big part to do in that play. A lot of her play, sometimes, comes off of energy. She may not get the actual assists or she may not get the points, but she was the one who rebounded it and pushed it up the floor.”

The Troy, New York, native did play a big part in MU’s first ranked win of the season as she put up 20 points, eight rebounds, seven assists and two blocks in 33 minutes of action.

Lott’s performance that Sunday afternoon was a realization to Adams that Lott could play at the next level, including the WNBA.

“I’ve always been impressed by her kind of consistency,” Adams said. “That’s number one with Selena, she may have not had a 50-point game, but she never had many games where she put up two or four points. Like she was always just steady.”

Now, one year later, that Sunday afternoon realization might have a happy ending.

Lott announced April 2 she would be declaring for the WNBA draft and forgo the extra year of eligibility given by the NCAA to winter sport athletes due to the coronavirus pandemic.

“Marquette University has helped me to develop as a person and as a basketball player while preparing me for life ahead. Looking back to the day I committed to this program, I leave with no regrets. This university has certainly left its MARQ,” Lott said in the post.

Defensively, she ranks ninth in steals (223) and eighth in blocks (81). This past season, she was Co-BIG EAST Defensive Player of the Year after averaging 4.2 defensive rebounds, 2.1 steals and 0.8 blocked shots during the regular season.

Adams, a former Division I guard herself, mentioned Lott’s ability to be a playmaker and impact the game in multiple areas is something that has stood out to her since she began covering Lott back in 2017.

For the first two seasons in blue and gold, Lott served mainly as a defensive specialist off the bench for then-head coach Carolyn Kieger.

“You could always kind of see that the scoring would come to her, and it did. But I was really blown away by her assists numbers,” Adams said.

Over the last two seasons under now-head coach Megan Duffy, Lott has served as the teams primary scorer and playmaker. This past season alone, Lott averaged 14.7 points, 5.3 rebounds, 5.2 assists, 2.1 steals and 0.7 blocks in 26 games.

Her 5.2 assists per game, which finished third in the BIG EAST, caught the attention of Adams.

“To me, that was what was most impressive,” Adams said. “Knowing that she was the team’s primary scorer but also kind of putting it on her shoulders to realize other teammates needed to score as well. And with her speed and her ability to take players off the dribble, she can create opportunities for her teammates.”

Duffy mentioned back in February that one of the things she respects about her senior guard is her competitiveness.

“She has been steady for us,” Duffy said. “(She) has a great skill set in her game, she’s been able to stretch defenses with her three point shots, been able to get into the paint and create a lot of great opportunities for offense.”

Adams considers Lott’s ability to be a versatile two-way player who takes pride in defending an opposing team’s best player as an advantage considering she is set to join a league that will feature players from power five conferences.

“The fact that she could really guard anybody on the perimeter, get into passing lanes, disrupt shots with her length (is) definitely a great asset,” Adams said. “To have a player, a young player like that (who) kind of takes matchups personally you don’t always see that, especially from a young player.”

In ESPN.com’s Mechelle Voepels’ most recent mock draft, Lott is projected to go to the Indiana Fever with the 26th overall pick.

Like Adams, Fever HC Marianne Stanley sees the 5-foot-11 guard’s ability to impact the game on both sides of the ball stand out.

“Selena is somebody who can score the basketball. She’s also a two way player. She demonstrated that she can get up and guard people a little bit,” Stanley said on a media conference call April 9. “There may be situations where you know at one end of the floor, she can really give you what you need and at the other end of the floor, she’s got a little work to do.”

Both Adams and Stanley noted that Lott having the experience of being given freedom with an offense as a young player is valuable for the next level.

“Coaches are going to teach you the offensive plays and they’re looking especially from young players, how quickly can you pick those plays up ….. But there’s points in the game where you need players to make a play,” Adams said. “Selena is a player who can do that and I think that’s definitely something that would transfer well to the next level.”

From covering the WNBA for ESPN, Adams views Lott’s 3-point shot as one area to continue working on.

“At the next level, they want you to consistently be able to be confident in taking that three and knocking it down,” Adams said. “So that’s kind of the biggest thing that she would continue to work on to really make an impact at the next level.”

Adams mentioned she can see Lott fit in perfectly with a more veteran team compared to a younger team.

“I could really see Selena fitting well into a system that has those veterans and that she can just come in, make a smart play, do what the coach needs her to do — rebound, take care of the ball — and that’s credit to her and that’s also credit from playing under two phenomenal head coaches in both Carolyn Kieger and Megan Duffy,” Adams said.

However, making a WNBA roster is not easy.

As noted by The Athletic’s Chantel Jennings, right now in the WNBA there are around 137 spots taken up with 61 of those players on protected contracts by teams and a majority of the rest still on their rookie scale contracts.

Heading into the draft, there are roughly nine spots amongst all 12 teams available per Jennings.

“For almost anybody, maybe outside of the top five picks, it’s going to be a battle to make a roster spot,” Adams said. “Once you do get drafted, hopefully you get the opportunity to go into a training camp and that’s when you just have to leave it all out there.”

Regarding Lott, Adams believes her ability to perform on the defensive end can help set her apart from others if given an opportunity to be at training camp.

Adams mentioned Lott’s leadership is another strength of hers and something she has seen Lott embrace over past two seasons in particular.

“Just from watching her in games, you can tell that she was always leading by her play and her energy play,” Adams said. “She’s diving on the floor for loose balls, she’s getting in passing lanes and that fires your teammates up, especially your younger teammates, and just kind of takes the pressure off them and gives them confidence.”

Though this year’s WNBA draft class consists of a lot of talent, Adams said there is one thing scouts can’t overlook when looking over Lott’s resume.