Despite Cowan’s big day, men’s lacrosse falls to No. 10 Georgetown 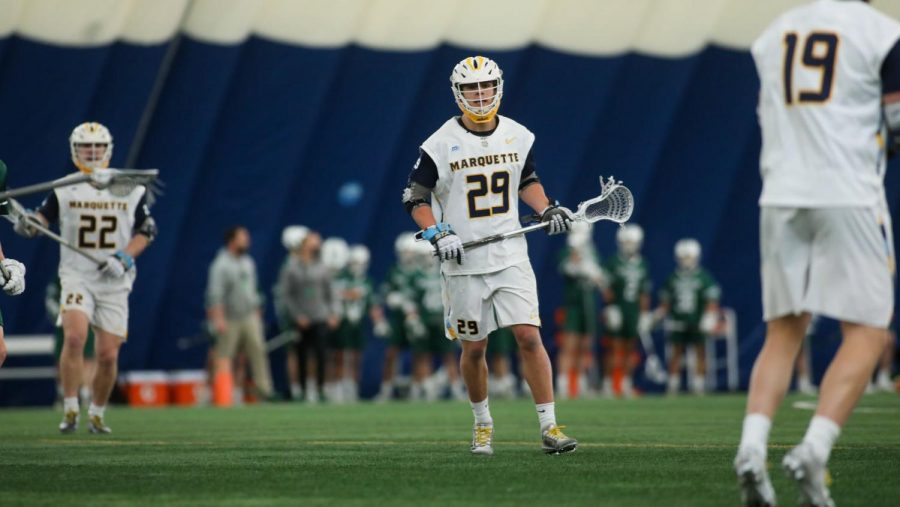 In the rematch Saturday, the Golden Eagles (1-7. 0-6 BIG EAST) took an 8-7 lead over the Hoyas into the fourth quarter, but they eventually fell 10-8 to the nation’s No. 10 team in their first game in front of family this season.

With the game being played on the outside field at Valley Fields, it was the first time in 399 days that family members were able to attend a game, as the team honored its 17 seniors prior to the matchup.

MU had a chance to earn its first ranked and conference win of the season, but was outshot 11-4 resulting in head coach Andrew Stimmel’s squad coming up short.

Georgetown hopped out to an early 3-0 lead in the first quarter before redshirt first-year attacker Devon Cowan got MU on the board with back-to-back goals to bring it to 3-2 with 2:52 left in the first frame.

Sophomore midfielder Graham Bundy Jr. answered with a goal 26 seconds later to put the Hoyas up 4-2 at the end first quarter.

The second quarter was a low scoring affair. Redshirt first-year Jake Stegman, who earned his first start of the season, scored his first collegiate goal to bring the game back within one to open up the frame. Cowan then followed by tallying his third goal of the half with five seconds left until the half to bring the deficit to 5-4 heading into break.

Cowan’s first half heroics continued in the second half. The Mount Laurel, New Jersey native scored three goals in the third frame to tie the game up at 7-7 with 4:43 left to play in the quarter.

Redshirt junior attacker Griffin Fleming fired one past Georgetown goalie Owen McElroy towards the end of the quarter to give the Golden Eagles a 8-7 lead heading into the fourth.

Georgetown’s defense took over in the fourth quarter, shutting out the Golden Eagles offense. Offensively for the Hoyas, graduate student Jake Carraway scored two of the three goals in the quarter to lift them to their seventh BIG EAST win of the season.

David Watson and Carraway led the way for the Hoyas on the afternoon with four goals apiece. Bundy Jr. added two as well. McElroy made nine saves and allowed eight goals.

Marquette will look to bounce back on Wednesday when they host the St. John’s Red Storm at 12 p.m. Central Standard Time.