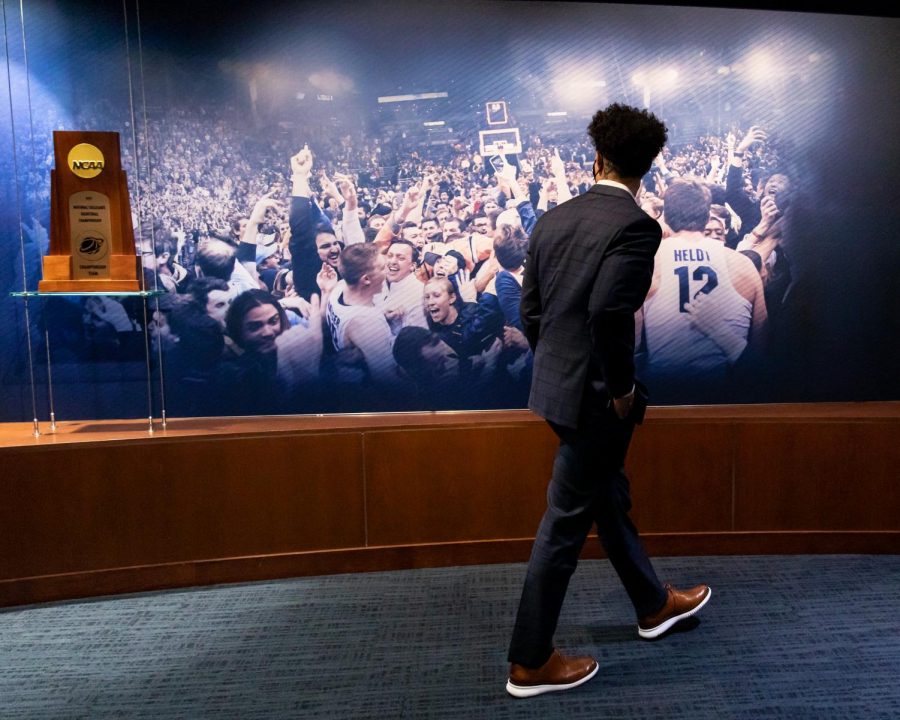 Shaka Smart during his tour of Marquette's campus March 28 looking at the NCAA 1977 championship trophy. (Photo courtesy of Marquette Athletics.)

When a head coaching change is made in college basketball, the program’s focus directly afterward is on whether or not the players in the program will stay, whether recruits will stay committed and if the possibility for new recruits or transfers opens up.

After parting ways with Steve Wojciechowski and the hiring of Shaka Smart March 26, that is the position Marquette men’s basketball finds itself in right now.

The program has already lost players and commits this offseason. Last year’s three seniors, Koby McEwen, Jamal Cain and Theo John, will not be returning to the program. As of Monday night, first-year Dawson Garcia plans to go through the NBA draft evaluation process.

The team will also be without Symir Torrence, who decided to transfer back to his hometown of Syracuse, New York, where he will play for the Orange. Torrence averaged 2.4 points, 1.4 rebounds and 1.5 assists in 13 minutes a game last season.

Finally, the program lost a verbal commitment from four-star center Jonas Aidoo. The 6-foot-11 center is currently No. 70 on the ESPN top 100 list for the 2021 class. He had verbally committed to Marquette, but had not signed a letter of intent.

That leaves the Golden Eagles with two first-year prospects for next season in guards Kameron Jones and Stevie Mitchell. Both have signed letters of intent and both have re-affirmed their commitments to Marquette since the hiring of Smart.

“I’ve been talking to Smart a lot recently and I’ve been getting to know him. He’s a really cool guy and really fun to talk to,” Mitchell said to BVM Sports. “Being able to learn from him is a great opportunity and I’m really excited to go to school there and get better on and off the court.”

The Golden Eagles have been hot on the recruiting trail since hiring Smart. Two recruits who committed to Smart at Texas in guard Tamar Bates and forward David Joplin have since de-committed from Texas and Marquette has had contact with both in an attempt to bring them to Milwaukee.

The 6-foot-7 Joplin is from Brookfield, Wisconsin, so he would be coming back home if he were to commit to Marquette, like Smart, an Oregon, Wisconsin native. Joplin has been pursued by Minnesota, Missouri, Vanderbilt and Virginia in addition to Marquette, according to Mark Miller with the Wisconsin Basketball Yearbook.

The 6-foot-4 Bates is No. 53 on ESPN’s top 100 and is also being pursued by Oklahoma, Oklahoma State, Indiana, Oregon, Illinois, Missouri and Purdue according to Stockrisers.

“For me it was pretty simple. I committed to Coach Smart, not Texas,” Bates told Sports Illustrated. “When he left I knew I would have to look at all my options.”

Smart and his staff have also been active when it comes to transfers. The Golden Eagles were among the top eight choices for the highly coveted forward Noah Gurley, but the 6-foot-8 Furman transfer ultimately chose to go to Alabama, which he announced Sunday.

“We had a good Zoom, I’ve always been a fan of Coach Smart so it was good to talk to him,” Gurley told 247Sports prior to his commitment. “He mentioned that he has been watching my game for a couple years so he’s familiar with me, and he explained how he wanted to use me in the offense and defense.”

Gurley averaged 15.4 points, 5.8 rebounds, 2.5 assists and 1.1 blocks per game as a junior last season. The Golden Eagles’ lone players taller than 6-foot-7 for next season are forwards Dawson Garcia and Oso Ighodaro after Aidoo de-committed.

Smart is also already at work with the players he already has, as the team has had multiple practice sessions. In videos from the Marquette Basketball Twitter account, we have seen D.J. Carton, Justin Lewis and Greg Elliott among others. We have not yet seen Dawson Garcia.

Carton has been vocal on social media about his support of the Shaka Smart hire, and has also done a little recruiting, tagging his friend and Michigan State transfer Rocket Watts in a tweet expressing his desire to play together.

There have been no reports of Watts being contacted by Marquette, but there is also no timeline, as of now, for when Watts will be making his decision. The 6-foot-2 guard averaged 7.7 points, 2.7 assists and 1.7 rebounds for the Spartans in his sophomore season. He was a four-star high school recruit out of Detroit.

With that, there are a lot of possibilities for change in the roster next season. The Golden Eagles are losing their three senior veterans and multiple other talented players, but we have yet to see the sum of all the new talent they could have on the team, in addition to the players returning from this past season.