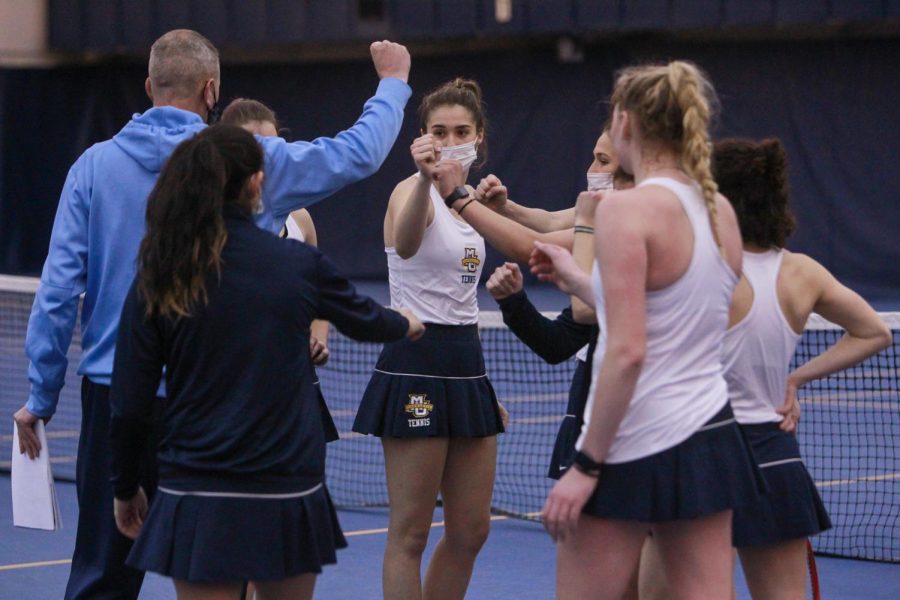 The 2020-21 women’s tennis team is 5-5, with two matches remaining prior to postseason.

The two matches are both away — at Xavier and Butler — and senior captain Natalija Popovic knows what part of the game the team needs to work on.

“We need to work on conditioning because the temperature is different outside versus inside,” Popovic said. “We need to play less aggressive.”

Popovic has missed most of the season due to an ankle injury and just returned for the last few matches. As a senior, it was hard for her to act as a leader for her team when four first-years are on the team because of her injury.

Also because of the pandemic, it has been hard for returning players to build team chemistry with the new players.

Redshirt junior Elisabeth Desmarais said it was hard to come back after not playing for a year.

“It was hard for us to help (younger players) out because we’re all trying to get back in this phase to playing matches again,” Desmarais said.

Desmarais had a tough start to this season, not being able to play, but thanks to the other players on the team, she has been able to look past that.

“The girls have been really supportive, and that has helped me build up confidence,” Desmarais said.

As a few matches slipped away from Desmarais, she took her coach’s advice to build up confidence.

“Confidence is built on many things like being physical so we would work extra hard on that,” Desmarais said.

In matches, when Desmarais is losing she knows not to give up and with building up her own confidence; it is important for her to help build up others confidence.

With this being her first season, first-year Lara Kaiser is preparing for the BIG EAST Tournament. While other first-year students might be nervous, Kaiser said she is not.

“I hear BIG EAST Tournament is tough on the nerves but I am really excited to see everything,” Kaiser said.

The adjustment from playing indoors versus outdoors isn’t an issue for Kaiser because she is used to playing in hot weather and she knows the kind of conditions that can occur.

“The coaches have done a great job preparing us right now for the conditions,” Kaiser said. “We will do sprints one day, then full sprints and on the court conditioning another day.”

Director of Tennis Steve Rodecap has also been preparing for this season. Rodecap said the season has been tough for him because Popovic has been out most of the matches with her ankle injury, and sees her as a leader.

“Girls look up to her,” Rodecap said. “She is kind and disciplined off the court.”

Rodecap also said that he loves the improvement his players have made this season.

“Elie got off to a slow start, but she is playing her best tennis now,” Rodecap said.

He has also said he noticed Popovic is playing her best tennis right now despite missing most of the season. Rodecap said he is very impressed with the development of Kaiser. “Kaiser is not as experienced as Desmarais and Popovic, she is still a great player on the team and has made enormous progress this year” Rodecap said.

“She has done so much despite not much experience under her belt,” Rodecap said.

With two matches remaining before the BIG EAST Tournament April 22-26 in Cayce, South Carolina, the team has high hopes for the conclusion of the regular season.

“I am confident we are going to win and end the year strong,” Rodecap said.