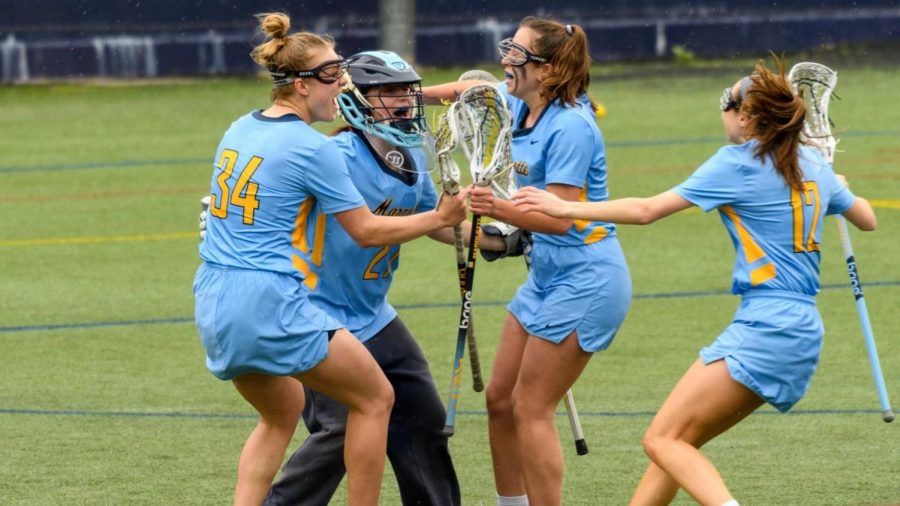 Marquette is victorious in first game of the weekend against Georgetown (Photo Courtesy of Marquette Athletics).

Although the term “tale of two halves” may be overused, for Marquette’s performance against Georgetown, it might be the best descriptor.

The Golden Eagles scored twice early in the first half, grabbing an early lead. However, Georgetown came back quickly, pour down hard on the Golden Eagles offense, scoring 7 goals in under 10 minutes. Marquette was then able to retain control in the last 10 minutes before half.

Marquette was led by senior attacker Lindsey Hill, who doubled her season total of goals, netting three straight goals including a hat trick in only two and a half minutes.

Marquette got a late boost in the first half as sophomore midfielder Hannah Greving scored just five seconds before the halftime whistle.

The second half looked like it might be more of the same. The Hoyas scored quickly out of the break, but that would be their one and only goal of the second half. Senior goalkeeper Sophia Leva went on to save the four other shots that Georgetown attempted to put in the net for the remainder of the contest.

Redshirt senior attacker Megan Menzuber, Marquette’s all-time leading goal scorer, would not be outdone by Hill’s first-half hat trick. After Georgetown’s early goal in the second half, Menzuber netted three straight in just over two and a half minutes.

Junior midfielder Lydia Foust also was a part of the hat trick group for the Golden Eagles, picking up three goals in the Friday afternoon victory.

Marquette improves to (5-6, 2-3 BIG EAST) and Georgetown moves to (3-7, 2-3 BIG EAST). Both teams will have a chance to grab another win before the weekend concludes, as they square off again on Sunday at 11 a.m. CST.

This story was written by Bryan Geenen. He can be reached at Bryan.geenen@marquette.edu or on Twitter @BryanGeenen.