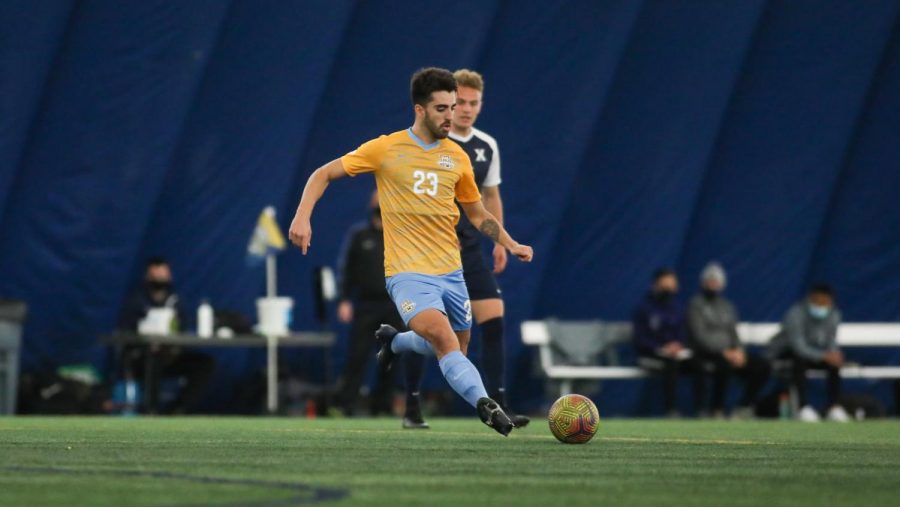 Junior midfielder Zyan Andrade gears up to kick the ball during the squad's 2-1 win over Xavier March 17 (Photo courtesy of Marquette Athletics.)

From Brazil to San Francisco to Israel, soccer has taken Zyan Andrade all around the world. After experiencing a variety of cultures across the globe, the junior midfielder has now made Milwaukee his home.

Andrade played collegiately for two years at the University of San Francisco before transferring to Marquette. The Dons went 8-24-2 in the two years Andrade was in the program. In his first year with the Golden Eagles, Marquette finished its regular season campaign with an 8-1-1 record that earned the team a national ranking.

Andrade said making the move to a more successful program was a bit of a tough transition, but one he knew he had to make.

“I’m just from another country, so I kind of got used to moving place to place and I knew I had to make a change, I knew I had to be in a different environment,” Andrade said. “And after talking to the coaches a lot, I thought Marquette was going to be the right place to be and it was the right season, the right decision.”

While Andrade was the one making the plays in crunch time, he said that the team’s play allowed him to have the opportunities to be the difference-maker when it mattered most.

“I think it’s just the ability to trust the people next to you,” Andrade said. “There’s Beto (Soto), Lukas (Sunesson), (Mirsberger), (Christian) Marquez — everyone is helping in some way, and not even just those guys.”

Andrade also credited the players in the back line, the ones running for 90 minutes trying to keep the ball out of the net, which has been a point of emphasis in head coach Louis Bennett’s game plan.

The squad has gone into overtime in eight of their 10 matches this season. Andrade said that even though there is a lot of pressure following regulation, the team has almost become accustomed to the adrenaline rush that it has been met with in extra-time.

Bennett said it takes a little bit of time to get used to new teammates and to establish a certain level of confidence, but Andrade came to Marquette already having a clutch gene in his skillset.

“When you have a certain technical ability and when you have a certain ambition, he comes with that kind of, ‘oh give it to me, I’ll do it,'” Bennett said. “We didn’t really have to encourage him. As soon as he was on set pieces, he was on set pieces. He strikes a lovely ball and in training if we say take some corners, he takes corners. So I think he came in with a skillset.”

Even though getting acclimated with new teammates can be challenging, Andrade was able to build an early relationship with first-year forward Beto Soto. The two came into the program as early enrollees last January, and Soto said that connection helped them build a bond, one that feels like they have known each other for years.

The first time they met, Soto, Andrade and some of Soto’s family went out to eat at Whataburger, a fast food burger joint that originated in Soto’s home state of Texas. Soto said it was possibly the most important moment he’s had with Andrade, because from that day on, the connection between the two was established.

In addition, Soto did not hesitate to mention that beating Andrade in the soccer video game “FIFA” was also near the top of the chart in terms of memories the two share.

“Since the moment we met each other, it was never awkward,” Soto said. “To this day we still have that strong bond. We always joke around each other. … I consider him a true brother. He’s helped me a lot throughout this whole year, school-wise and soccer-wise.”

Soto also said that he and Andrade have similar mindsets, and those mindsets are represented by the team’s stellar record.

Bennett has also noticed the hunger to win, specifically during practices.

By the middle of the season, Bennett told the midfielder that he knows Andrade likes to play aggressive, but suggested that he could play a simpler style. The Rio de Janeiro, Brazil native listened, and Bennett said it was one of the most noticeable improvements he made to his game.

“Simplicity, in essence, is brilliance,” Bennett said. “And the simpler he plays, the more he stands out as being so insightful (and) having such a great knowledge for the tempo of the game. … He carried a heavy lot of tools with him and realized, ‘I don’t have to use them all every play, I only need a couple so that I can last the game,’ and that’s been the biggest, biggest improvement.”

Reflecting on his first regular season with the program, Andrade said it has been a successful one, but noted there is still work to be done, as the Golden Eagles will look to extend their season in the BIG EAST tournament semifinals April 15.

“I think having that first season as an adaption season was good in a way, and coming into this season everyone was super hyped (after) a year without playing any games,” Andrade said. “So it’s been really enjoyable and the team (and) the coaches are helping me with everything.”