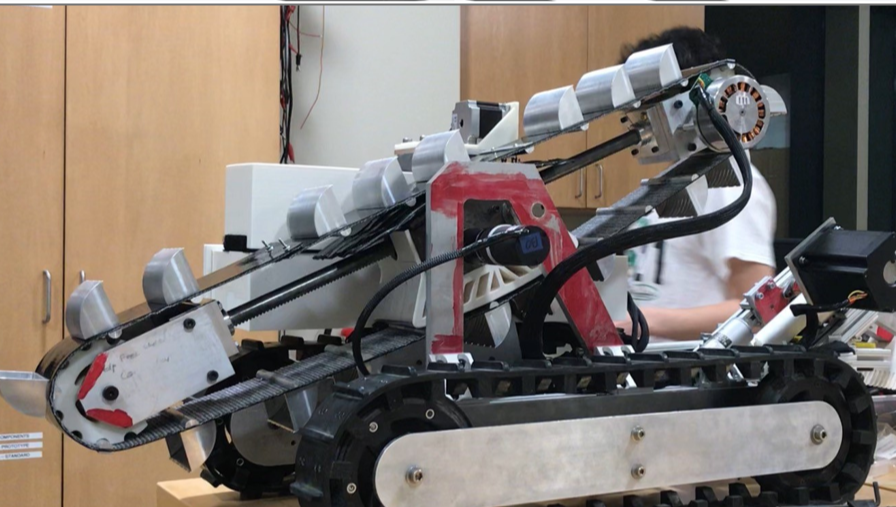 If you passed by the glass walls in Engineering Hall 461 the past two weeks you may have gotten a look at an “H-bot.” Created by a group of graduate students.

The “H-bot” is similar to an etch-a-sketch and uses whiteboard markers to write on the glass walls. Associate professor of mechanical engineering said that while the H-bot was mainly a fun project for the graduate students, he is also figuring out how to use it in tours. The H-bot is also currently being used as a demonstration in Voglewede’s Industrial Robotics and Measurements and Controls class.

In addition to the “H-bot” there are numerous other robotics developments at Marquette on both the student and faculty level. Some of these developments include robots that can better mimic human hand movements and robot arms that can move in a forging press.

A group of students are also participating in a lunabotics competition by NASA where students work to design a robot that can operate by itself and navigate a simulated moon surface.

Joseph Schimmels, professor of mechanical engineering, said he is working on designing robots that are “more human-like in performing dexterous manipulation.”

This includes developing robots that can perform tasks that require contact with other objects. With humans, “dexterous manipulation” involves humans interacting with objects and their surroundings using their hands. Schimmels said some of these tasks are things like peeling a potato, opening a bottle, or assembling furniture.

“Most robots today are position-controlled rigid manipulators.  They are great for accurate positioning in free space, but very limited in their ability to perform tasks that involve contact with other objects, especially when there is uncertainty where those other objects are located,” Schimmels said in an email.

By looking to develop robots with the ability to more fully interact with their environment Schimmels’ research looks to address that problem.

“We are now designing a simple planar robot hand that is capable of adjusting the stiffness of each joint in each finger.  This type of hand, together with how it holds an object, provides the object an appropriate overall stiffness — one that will allow it to self-correct any relative positioning inaccuracy,” Schimmels said.

This research will help robots to be more useful in the real world and in workplace environments. With the ability to adjust robot stiffness, the robots will be able to perform tasks in a similar manner to humans. The adjustability of the robot stiffness is similar to how humans contract or relax certain muscles depending on the task.

In addition to research, there are also student-led groups in the robotics field at Marquette. The Marquette Robotics Group is an academic group that allows students from any academic field to get involved.

“We are currently uncompetitive, meaning our project is purely academic and not for robotics competitions. Throughout the last year, we have been coding, designing, and 3D-printing a miniature industrial-style robotic arm from scratch,” Daniel Huetz, Senior in the College of Engineering and President of the Marquette Robotics Group, said.

The group is also working on coding a vision system for the robotic arm that Huetz said will help the it “see” and interact with the world.

The Marquette Robotics Group aren’t the only students designing robots. A student led design group is working on a mobile robot as part of NASA’s lunabotics competition.

According to NASA , “Lunabotics challenges teams to design, build and run their autonomously operated robot, traverse the simulated off-world terrain and excavate the simulated Lunar regolith.”

Essentially, students work to build a robot that could navigate a simulated lunar regolith, which is a powdery substance that covers the surface of the moon.

On the faculty side, Voglewede has partnered with graduate student Kyle Wolf and associate professor of mechanical engineering Joseph Domblesky to do research on “having an anthropomorphic robot arm intelligently move parts in a small forging press.” A forging press works to shape and manipulate metal.

In addition to the robot arm, Voglewede and Domblesky are working with their colleague Richard Povinelli, professor of electrical and computer engineering, to enable to the robot to use artificial intelligence in the forging press to make it more efficient.

“We just received a grant on this work so we don’t have anything to show yet.  It will be an extension of the robotic tending project,” Voglewede said.

Whether it’s playing a game of tic-tac-toe with the H-bot, or building a robot that can travel across the surface of the moon, students and faculty at Marquette are experimenting and researching all sorts of things in the field of robotics.