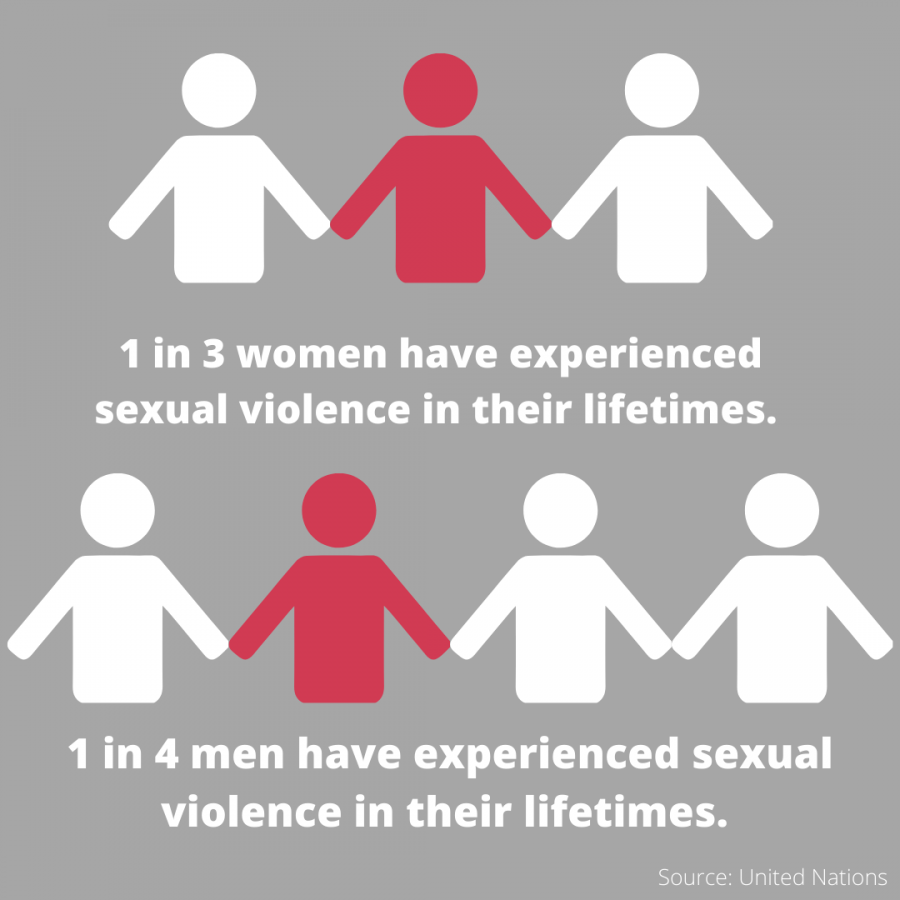 This story is part of a series called “Moving On, But Not Forward.” As we see an end to the COVID-19 pandemic, this series draws attention to the social issues that were less prioritized during the pandemic but are now coming back into the public spotlight.

Despite the distribution of the COVID-19 vaccine increasing across the nation, we have not yet moved forward in addressing other societal issues. There is a silent pandemic that has plagued our societies globally, one that we have not yet remedied: the struggle for women’s rights, especially regarding sexual assault.

According to the National Sexual Violence Resource Center, sexual violence is the act of forcing or manipulating someone else into unwanted sexual activity without their consent. Reasons someone might not consent include fear, age, illness, disability and influence of alcohol or other drugs. Additionally, people may not consent because they change their minds.

Anyone can experience sexual violence including children, teens, adults and elders. Those who sexually abuse can be acquaintances, family members, trusted individuals or strangers.

Although anyone can be a victim of sexual assault, it is very common among women and affects them at a higher rate than men. According to the Centers for Disease Control and Prevention, as of February 2021 more than one in three women and one in four men have experienced sexual violence involving physical contact during their lifetimes. Nearly one in five women and one in 38 men have experienced completed or attempted rape.

This is not to say that sexual violence against men is not equally important but rather to show the disproportionate way it affects women. For example, 86% of young women aged 18 to 24 in the United Kingdom have been sexually harassed in their lifetime, according to a survey for UN Women U.K. This imbalance stems from a history of misogyny and sexism which has led to other inequality issues women face today, such as the gender wage gap, gender discrimination in the workplace and poverty.

Since the coronavirus outbreak, sexual violence has only increased, specifically in the domestic sphere. Lockdowns and stay-at-home orders were crucial to containing and controlling the coronavirus, but the silent pandemic that many girls and women were facing during the time was one that contradicted the idea of being safer at home.

Global data from the UN shows an increase in calls to Violence Against Women and Girls helplines, especially in Latin America and the Caribbean region. In Mexico, emergency calls related to violence against women and girls increased by 53% in the first four months of 2020. During March and April 2020, the National Network of Refugees reported a 77% increase in the number of women using their services compared to the same period in 2019.

Not only has the pandemic pushed VAWG to the side, but it has also allowed for attacks on women’s rights to fly under the radar. Last month, the Minnesota Supreme Court overturned a sex crime conviction because the victim was voluntarily drunk. The woman, the court said in a unanimous decision, was “voluntarily intoxicated” at the time because she had made the decision to drink, and therefore did not meet the threshold for mental incapacitation under state law. The Minnesota Supreme Court has called for a new trial based on the fact that the victim was not forced to drink which has caused public outrage.

If it were not for social media, I would not have seen this case, making me wonder, how many others are missing out based on the prominence of the coronavirus in the news cycle? Rulings like these are important to talk about and even protest, but most of us are missing out on it, forcing topics of sexual violence back into the darkness. This is why we need to continue to shed light on this second and silent pandemic.

As we move on from the coronavirus pandemic, we need to realize that moving on is not moving forward. We will continue to be plagued, whether by the coronavirus or sexual violence, if we do not understand the severity of it. Violence against women and girls is not an inevitable part of life; It can and must be prevented.