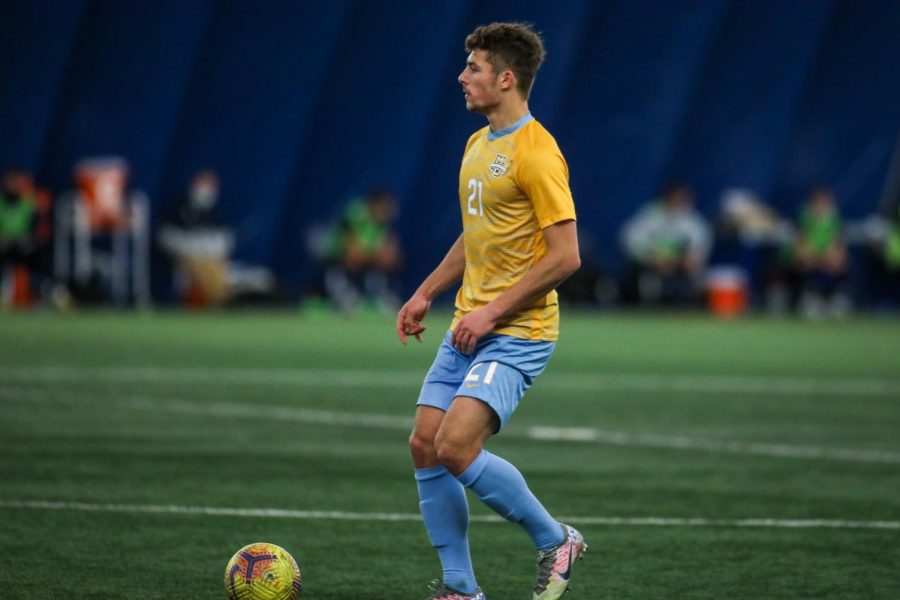 Having given up just six goals in 10 games, including five clean sheets, the Marquette men’s soccer defense has helped guide the team to a 9-1-1 overall record and a No. 19 ranking in the country.

One of the leaders of that dominate defense is redshirt sophomore Alex Mirsberger, who, as a defender, stood out this past week for something he normally does not get the chance to do: scoring a game-winning goal.

“I always love when we score, but it was special to see my roomie get the winning goal,” redshirt sophomore forward Nick Guido said. “It was awesome to see him win the game for us, he always tells us that he should be in there in the boxes and corners.”

The defender from Brookfield, Wisconsin, won BIG EAST Defender of the Week last week after scoring that game-winning goal in overtime against DePaul, as well as helping his team to their fifth clean sheet in their 1-0 win against Butler.

In addition to the goal this season, Mirsberger also has two assists, one of which came on Lukas Sunesson’s game-winning goal in overtime against Northern Illinois Feb. 7. He has taken seven total shots on the season, but has been praised by his coaches and teammates for his play on the defensive end.

Mirsberger said that individually he is more confident, but his main goal is still doing the job that his team and his coaches need him to do.

“I’ve definitely come into my own and started to play with more confidence,” Mirsberger said. “I just try to play my part and do the best that I can.”

Head coach Louis Bennett has preached to his players all year the simple fact that if you do not give up a goal, you cannot lose the game. Mirsberger said that this mindset has resonated with their team this season.

“After those three shutout wins we realized how nice it was to keep a clean sheet and to win those games,” Mirsberger said. “We’ve been good at being able to grind it out, block shots and defend to the best of our ability.”

Mirsberger said it’s been a process to get to where he’s at today. After serving as a team captain at Brookfield Central High School and finishing first team all-conference his junior and senior seasons, he redshirted his first year at Marquette.

Since then, he has been a key part of the team, starting in all but one of the 26 games he has played in his career in the last two seasons. In six fewer games and 174 fewer minutes this season, Mirsberger has matched his total of one goal, two assists, four points and has one more shot taken (seven) than he did in 2019.

In terms of how he has learned and improved in his time as a Golden Eagle, Mirsberger pointed to one of his former teammates, defender Patrick Seagrist. Seagrist finished on the All-BIG EAST First Team in his final two seasons at Marquette in 2018 and 2019.

“I really looked up to him and as another outside back, we were close buddies,” Mirsberger said. “He (Seagrist) was someone I strived to be like and he took me under his wing. Was someone who taught me a lot.”

One aspect of this season that is different than the two previous for Mirsberger is the absence of fans in the stands. Being from Brookfield, Mirsberger is used to having an abundance of family and friends cheering him on at Valley Fields.

“My family still texts me every game day asking if they can come, unfortunately I have to say no every time,” Mirsberger said. “I know they’re still watching the games on TV though. It stinks they can’t be there in person but they’re still supporting me.”

As his roommate, Guido also knows how fans not being allowed is having an impact on Mirsberger’s family and friends.

“Definitely stinks for him, his family is really involved,” Guido said. “He’s one of the faces of the team for sure, so it’s a bummer that his great season would be even better with fans, but he’s putting on for Brookfield.”

Despite the lack of fans, Mirsberger and the rest of the Golden Eagles have their sights set on what is in front of them.

“If we beat Xavier, we clinch our side of the division, and that’s a big deal,” Guido said. “All eyes forward, we’re not content with where we’re at.”

Mirsberger echoed that statement, saying that he is not at all concerned with the individual accolades this season has brought him.

“There’s all these awards and rankings, but at the end of the day it doesn’t mean anything if you can’t go anywhere,” Mirsberger said. “For me, it’s all about getting that BIG EAST championship ring on my finger.”