Soccodato embraces everything that is Marquette 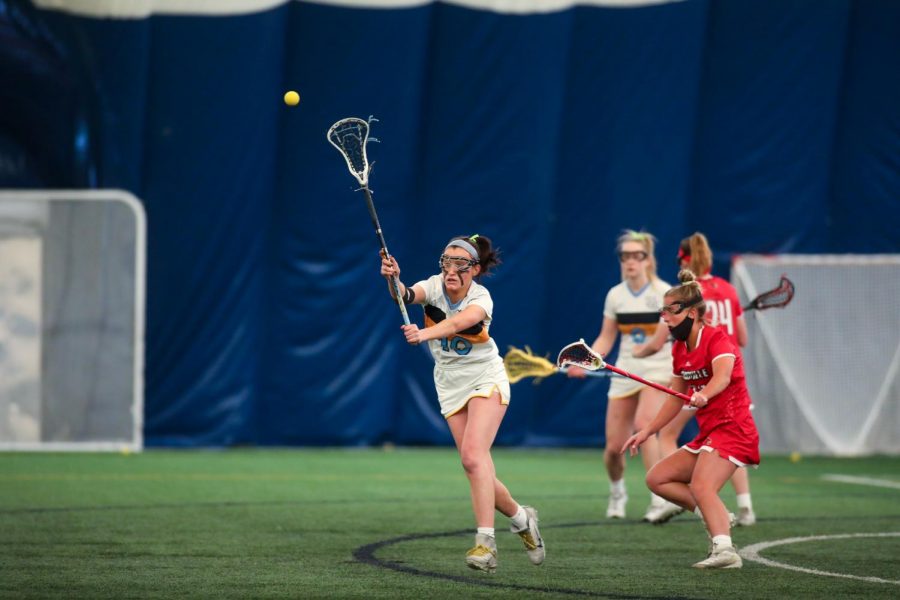 While sophomore midfielder Emma Soccodato has only been on the women’s lacrosse team for two years, head coach Meredith Black has known Soccodato much longer.

“I think she committed as a sixth grader, (jokingly) but she came to our camp and told me then that she was going to be on this team and she kept to her word and however many years later, she’s now on the team,” Black said.

A Huntington, New York native, she lived near many of her close friends and loved hanging out at the beach during the summer.

When Soccodato was not at the beach or hanging out with friends, she was with her older sister Cate, who played for coach Black and the Golden Eagles from 2016-19. Soccodato said she loved to replicate what her older sister did and was part of the reason she decided to play lacrosse.

“Just seeing my sister, I loved to copy everything she does, but I’ve always loved lacrosse more than any other sport, so I didn’t really doubt for a second that I wanted to play lacrosse in college,” Soccodato said.

Coach Black has loved having Soccodato on the team with the energy that she brings.

“It’s awesome,” Black said. “She is such a fun person, a hard worker (and) probably one of the hardest workers I’ve ever coached, she embraces everything about Marquette.”

While Soccodato has tried to match everything Cate has done, according to Black, the only thing that is similar between the two when it came to coaching them is the name and number on the back of the jersey.

“There’s nothing the same. (Emma) is a midfielder, Cate was an attacker, so already there is a big difference, Cate was like a feeder and a finisher. Attackers are more finesse players, and middies (midfielders) are grit players, so that’s the very difference between those two,” Black said. “Emma is more outgoing, much more energy. Cate was very quiet, very to herself. … I can’t say it enough, there’s nothing the same about those two.”

Although the two are very different, Soccodato looks up to and admires her old sister.

“Copy is kind of a dig at myself, I just admire her so much,” Soccodato said. “She’s inspired me more than anyone.”

While the sisters did not get to play with each other at Marquette, they did get to play together on the international stage, representing Team Italy at the 2017 World Cup, where the younger Soccodato scored nine goals and six assists in eight games. Team Italy finished 3-1 in group play and placed in the 11 spot out of 25 teams while the sisters were on the team.

“Playing for them was probably the greatest experience of my life, just meeting new people, even on other teams and different cultures was absolutely amazing. Just being so young and playing at such a high level taught me a lot, that I think was good to experience that before college and playing with my sister was the best part about it. I really wanted to take advantage of playing with her and it was just so fun,” Soccodato said.

It was an extra point of pride for Soccodato, from a young age her parents taught her to be proud to be an Italian.

“It’s really important,” Soccadato said. “Ever since I was younger, both my parents instilled in me the importance of being proud of being an Italian. My grandparents on my dad’s side are both immigrants and just hearing their story of how hard it was immigrating from Italy to the U.S., and all the sacrifices they made, I am so proud to be an Italian and wearing that jersey was just one of the best feelings and I definitely know it made my dad proud.”

While Soccodato is trying to figure out what exactly she wants to do, she knows she has a connection to the nonprofit world and wants to get into that any way possible.

“I know that I want to get into the nonprofit world,” Soccodato said. “I’ve always had a connection with that and my major right now is operations and supply chain management, so I’m hoping to get on to the business end of nonprofits and honestly make a positive impact. That’s always been my calling; my goal is to chase that.”