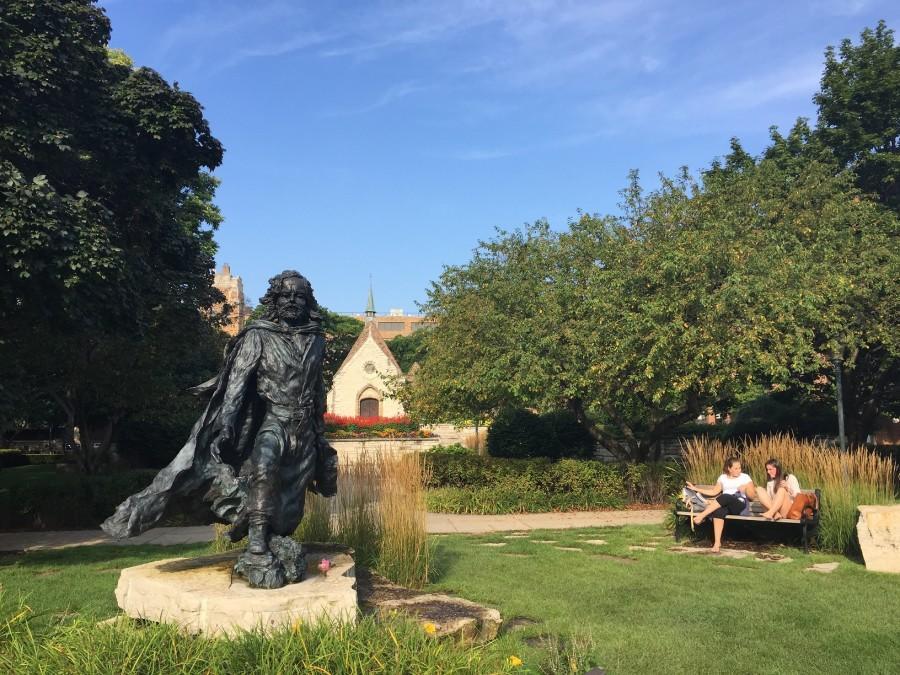 The podcast series “Our Roots Say That We’re Sisters,” which was brought to life by director and chief curator of the Haggerty Museum of Art, Susan Longhenry, and associate director for Hispanic Initiatives, Jacqueline Black, aired its first four episodes this past March.

The podcast, which receives support from the Haggerty Museum of Art and Marquette University’s Office of Institutional Diversity and Inclusion, was created to amplify the voices of diverse women-identifying individuals whose images and contributions have been systematically made invisible. The podcast serves as an extension to the mural project, also titled “Our Roots Say That We’re Sisters,” located at the back of Varsity Theater.

Longhenry said the idea to extend the project beyond the mural came from the artist himself, Mauricio Ramirez.

“The proposal that artist Mauricio Ramirez submitted last August for the Our Roots Say That We’re Sisters mural suggested that Marquette compile oral histories of some of the University’s highly accomplished female-identified BIPOC (Black, Indigenous, and people of color) alumnae,” Longhenry said in an email.

After Ramirez’s proposal to expand the project, Longhenry said it was both Black and her that decided to move forward with the idea in a podcast format.

“Upon reflection, we decided to expand the scope to students, faculty, and alumnae – and to adapt the idea to a podcast format,” Longhenry said in an email.

Along with amplifying the voices of female-identifying students, faculty, staff and alumnae of color who have exhibited “leadership, positive impact or social change,” Black said the podcast will be used to highlight those in this category who remain “unsung sheroes.”

“The phrase “unsung sheroes” refers to women who are engaged in important work to uplift the community or who have had a positive impact within their spheres of influence, but who have not necessarily been recognized publicly, or whose stories are not widely known,” Black said in an email.

In highlighting the contributions of “unsung sheroes,” Longhenry said she hopes the podcast will also “erode” a bias.

“I think of poet Kyle ‘Guante’ Tran Myhre’s words that ” ‘… white supremacy is not a shark; it is the water,’” Longhenry said in an email. “For far too long our cultural default has been to associate leadership, expertise, and authority only with white men.”

According to a 2017 report, almost 75% of Fortune 500 boards – which are annual lists that compiles 500 of the largest United States corporations by total revenue for the fiscal year – were mainly composed of white men. Only 19 of these companies were led by people of color and only 21 led by women.

However, Black said she hopes the podcast will give power to women of color and an ability to “see themselves reflected in the experience of our speakers and see their potential elevated.”

“It is my hope that stories like these become more central to Marquette – that these stories will no longer be relegated to the periphery of who we are as an institution and as a community,” Black said in an email.

Raabia Sheikh, a sophomore in the College of Arts & Sciences and first-generation Pakistani American, said the podcast is a step in the right direction for Marquette as it can be used to educate the majority white population on campus.

“Marquette prides itself in being a diverse campus but I have met maybe one other Muslim woman,” Sheikh said in an email. “However, having a podcast where people have guests to speak on their experiences and educate Marquette‘s population is a great first step in the right direction.”

Looking forward, Black said she and her team will be pushing out around three new podcasts per semester beginning next year, as “Our Roots Say That We’re Sisters” has received several nominations for podcast guests and has already had 10 cohorts excited to participate.

“It speaks to the need for projects like this across campus,” Black said in an email. “So we will be scaling this up.”