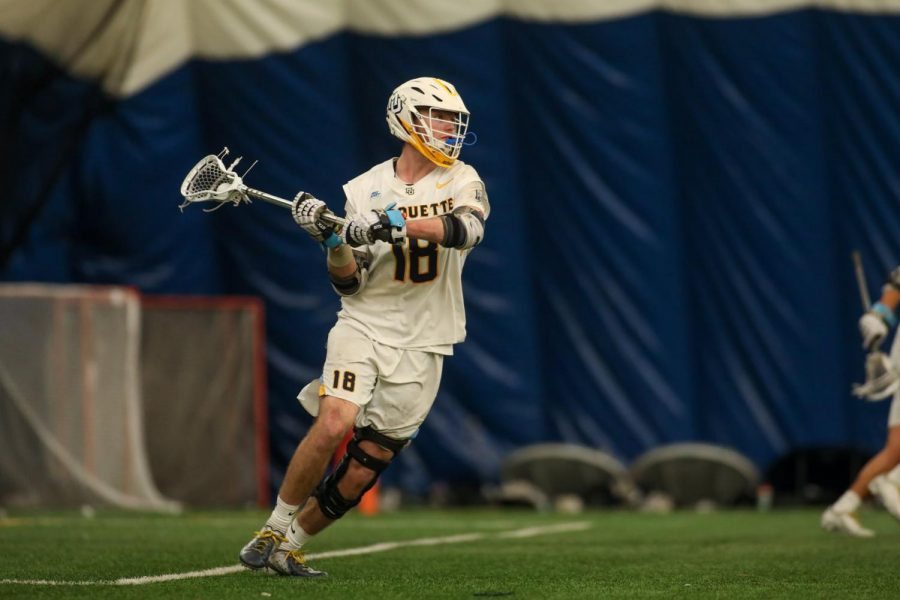 Redshirt junior attacker Griffin Fleming (18) gets ready to take a shot during a game against Providence March 13 (Photo courtesy of Marquette Athletics.)

Russell Melendez also had three goals for his first hat trick of the season. The first-year attacker had multiple chances to score, tallying 10 shots, five of which were on goal, as Marquette topped the Cleveland State Vikings (1-4, 0-0 ASUN) 10-5 Saturday afternoon.

MU came out of the gates firing. Melendez, graduate student attacker Ryan Fazio and redshirt first-year attacker Devon Cowan all found the back of the net as the Golden Eagles put six shots on goal. Junior midfielder Nick Polydoras was able break the seal for the Vikings, scoring with 35 seconds left in the first quarter to put CSU on the board.

A defensive-minded second quarter featured only three combined goals between the two teams, but both squads traded punches following halftime. Melendez scored two goals that were both answered by sophomore attacker Brendan Sigurdson and redshirt senior attacker Chase Baker to cut the Marquette lead to three.

Fleming then found his rhythm, scoring three unanswered goals, two of which were assisted, to bring the lead to six with just over 11 minutes left to play. Junior midfielder Gabe Reno would score late, but Cleveland State was then held scoreless for the final eight minutes of play.

Despite the end result, CSU outshot Marquette 35-33, won 12 of 19 faceoffs and picked up two more ground balls. The Golden Eagles made up for the shooting disparity by forcing 10 turnovers and putting three more shots on goal. The Vikings struggled to maintain possession throughout the game and turned the ball over 21 times.

Marquette will now look to put together their first win streak of the season, as they hit the road for their second matchup of the season against the University of Denver on April 3 at 1 p.m. Central Standard Time. The Golden Eagles lost by just one goal in their season-opener against Denver on Feb. 20.