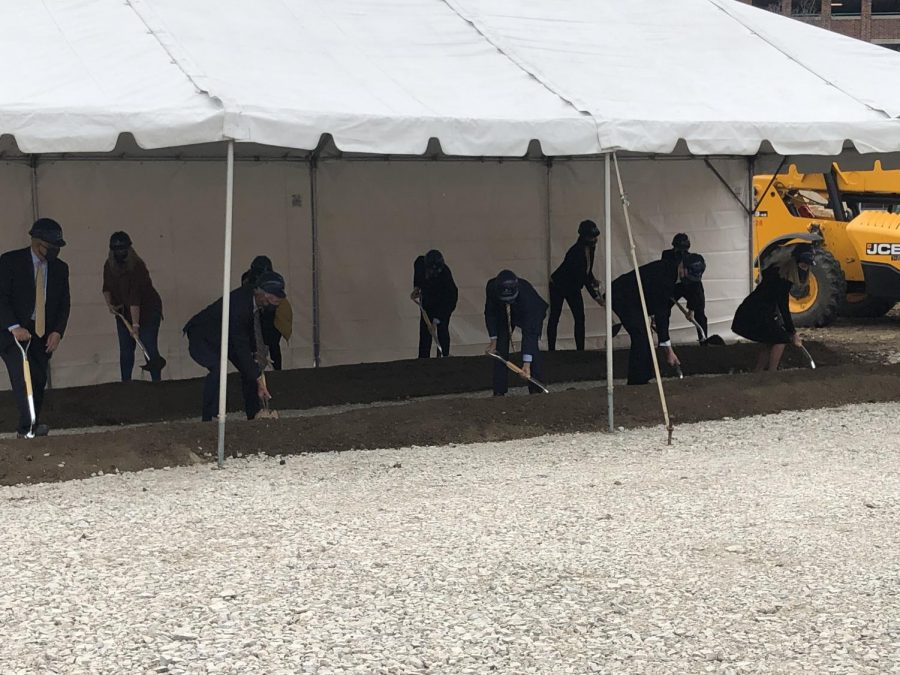 The ground breaking ceremony was done by members of the Marquette community March 23.

First-year in the College of Business Administration Tyler Pietsch said it was a good day for him.

Pietsch and his group of friends watched the groundbreaking ceremony for the new business building from outside the Alumni Memorial Union lawn March 23.

“We’re really excited about the new business building,” Pietch said. “We’re gonna get a year and a half out of the new building … We just wanted to see it cause this is going to be our home.”

Although no official name for the new home for the College of Business Administration has been revealed, Hanley said there are plans to honor the late dean’s life after he was killed in a car accident last year.

“It was Joe Daniels vision that brought us here today,” Hanley said. “We’re definitely going to do something to honor Joe.”

Ground broke at 2 p.m. during a live stream to the Marquette community and the construction process is set to begin right away.

“Next step is we continue to clean up the site and get ready to start digging the hole,” Vice President for planning and facilities management Lora Strigens said. “You’ll see a lot of construction taking place here over the next 18 months.”

While the place where the business school is set to be was used as a place for Marquette students to congregate during the warm weather. Strigens said that the business building will actually have an outdoor area that will act as a green space.

“(There) will actually be a cafe that will open up into this green space,” Strigens said. “We’ll have this active campus cafe right on the peripheral of that green space … I actually think it’ll be an improvement.”

However, just outside of the construction site, members of the Marquette community held a silent protest with signs that read “no one gets fired.”

This was one of many protests that have been going on this school year protesting the university’s recent decisions to eliminate 39 positions and not renewing contracts of non-tenure track faculty.

“We just wanted to remind administration that there is human cost happening here at the same time of these capital projects,” graduate student of philosophy Sarah Kizuk said.

Some of those who were present at the ground breaking walked right past the silent protest without acknowledging their presence.

“None of them looked at us at all, and I’m not surprised,” Kizuk said. “But I am really sad that they couldn’t even acknowledge the fact that we were here … it’s disgraceful.”

Kizuk said that there are more plans for members of the Marquette Academic Workers Union and the Marquette community to keep voicing their demands to the university.

“We don’t plan for it to end here,” Kizuk said. “We’re trying to build a movement here.”

The new school will complete its construction by December of 2022.

Kaylee Staral contributed to this report.