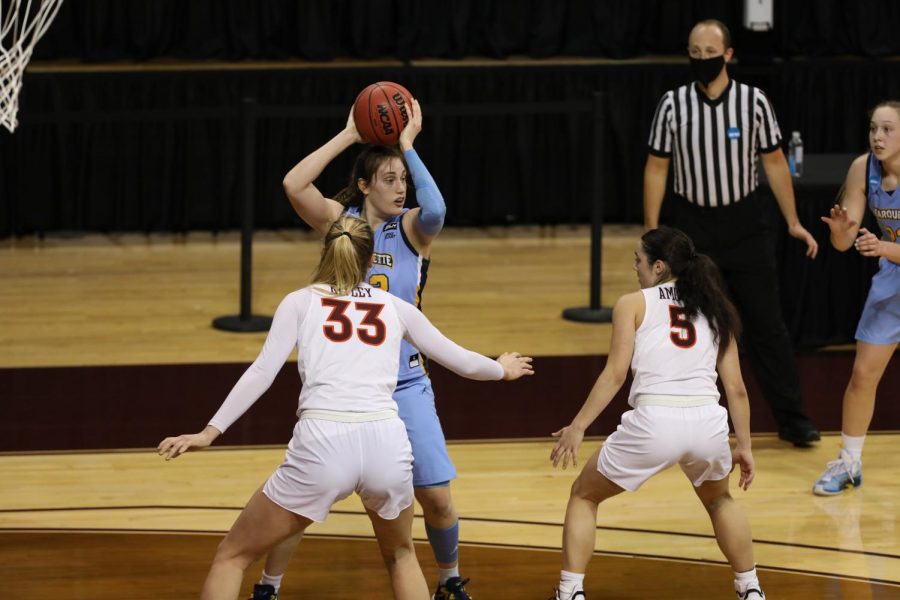 The Marquette women’s basketball team concluded its season Sunday afternoon, losing 70-63 to Virginia Tech in the first round of the NCAA Women’s Basketball Tournament in San Antonio.

“Just incredibly proud of our Marquette program and our players,” head coach Megan Duffy said. “What they have had to experience this year with three quarantines and pauses is a lot for 18–22-year old’s and I’m just proud to be their coach.”

Despite trailing 62-49 with 2:14 left, the Golden Eagles never gave up and rallied by catching fire from 3-point land as the team brought the game within three points with 30 seconds left. Virginia Tech would eventually ice the game with a couple of free throws with seven seconds left in the game.

“The effort you saw at the end has been us all year, just the toughness and grit that we’re never out of things, but just came up a little bit short today,” Duffy said.

Despite shooting 48% from the field, the Golden Eagles put themselves in a hole early on by struggling to hold onto the ball, as the team committed 13 turnovers in the first half.

After trailing 32-21 at halftime, Marquette could never get within striking distance until near the end of the game. Every time the Golden Eagles sparked a couple of baskets in a row, the Hokies would make a run of their own to extend their lead.

The Golden Eagles also struggled to contain sophomore forward Elizabeth Kitley, who posted 23 points on 11-for-19 shooting to go along with eight rebounds. Kitley’s presence in the paint also allowed her teammates to get open as she drew numerous double teams throughout the game.

Kitley, who averaged a double-double throughout ACC play in the regular season, was Marquette’s main focus coming into today’s matchup.

“It was obviously great to see our fight towards the end, we believe we’re never out of a game and in especially in March Madness you never know what’s going to happen,” Van Kleunen said.

In what could be her last game in a Marquette uniform, Van Kleunen is just thankful for this opportunity in a year of uncertainty.

“It’s been amazing to be here as the NCAA Tournament has a done a phenomenal job between everything with COVID-19 protocols and keeping us safe,” Van Kleunen said. “Just being able to play at these sites and have fans has been awesome and a great experience.”

Senior counterpart Selena Lott also did a little bit of everything for Marquette, as the team’s leading scorer posted 17 points on 7-for-10 shooting to go along with six rebounds and five assists.

Lott was also assigned to guard Virginia Tech senior Aisha Sheppard, who came into today’s contest averaging 18 points per game. Lott showed she’s more than just a scorer, as she held Sheppard to just seven points on 2-for-7 shooting on the afternoon.

“I thought overall Selena did a great job of limiting Sheppard’s touches and forcing Virginia Tech to have a couple of their other players make plays in which they did,” Duffy said.

Sophomore forward Camryn Taylor was the only other Golden Eagle who scored in double digits, as she posted 15 points on 6-for-14 shooting.

After the loss, Marquette ends its season with a 19-7 overall record and is now 6-13 all-time in the NCAA Tournament. The Golden Eagles will also have to wait another year for Duffy’s first tournament victory.

With a young team set to return next year along with a couple of highly rated recruits coming in, Duffy is confident with where this program is headed for the future.

“I’m just overall thrilled with the way this team has handled this year and I know we’ll be back,” Duffy said.

This article was written by Sam Arco. He can be reached at sam.arco@marquette.edu or on Twitter @_sam_i_am119.