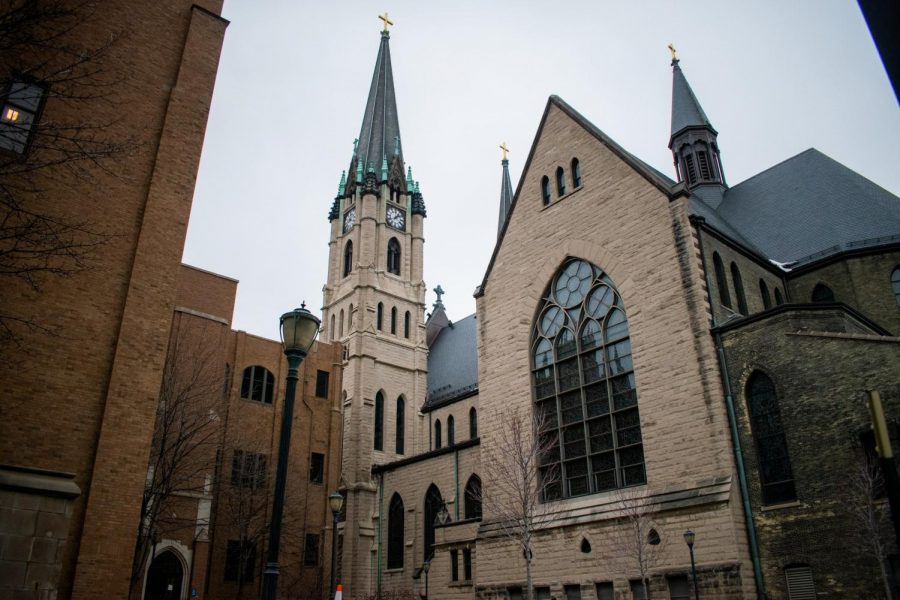 University continues to hold mass at the Church of Gesu

COVID-19 has brought changes to every aspect of people’s lives, from school to work. Even the way people practice religion has been affected.

Father Grant Garinger, a professor in the College of Communication, liturgical coordinator for campus ministry and a Jesuit priest with the Society of Jesus, said there are many adjustments to the way Mass runs with COVID-19.

These include restrictions regarding the number of attendees allowed in Mass, extra sanitation protocols, and  finding new ways to allow those who can’t be in the chapel at Mass to attend; such as live-streaming Mass.

Garinger said  that they’ve had to turn people away from attending Mass due to restrictions on capacity.

In the Chapel of the Holy Family, located in the AMU, the normal maximum number of people is 140. However, with COVID-19, there’s only 35 people allowed in the chapel. To help increase the number of people that can attend though, two of the ball rooms in the AMU have been rented out and play Mass on a screen for those who do not get to attend in the chapel. Communion is also then brought up to those people.

Similarly, Garinger said that the Church of the Gesu, which is not run by Marquette but still allows students to attend, can usually hold 1,000 people. The church is currently running at only 10% capacity with only 100 people allowed at a time.

Because of these capacity restrictions, people have to make a reservation online ahead of time to attend Mass. Additionally, Mass at Gesu is spilt so that only certain people may attend at certain times. Marquette students specifically can only attend the 6 P.M. Mass on Sunday, while usual Gesu parishioners have other times they can attend.

“The sad thing is we’ve had to turn people away,” Garinger said. “It’s just really difficult to say to someone you can’t come to Mass.”

To combat the limitations though, Garinger says extra Masses have been added on Sundays and they’ve started livestreaming Mass, which has resulted in people watching from across the country.

Garinger said that the limitations are to help with contact tracing in the event of an outbreak, as well as keeping the number of participants within the Milwaukee Health Department’s regulations.

“Thankfully, there’s never been an outbreak that’s happened that they can trace back to a liturgy, which is great,” Garinger said.

Francesca Young, a first-year in the College of Health Sciences, said usually when she attends mass, she would “sit in a crowded pew, buddy-buddy with everyone (and) no one (would wipe) down books or benches when it (was) done.”

However, since attending during the pandemic, Young has seen that everything has been “pretty low contact.” Everyone is “spaced out” by themselves. In place of song books, paper booklets, that get thrown out after use, are used. No one gets up for communion, everyone uses hand sanitizer before and after mass, and everything is wiped down once people get up.

“It’s different,” Young said, “ (but) everything is pretty normal.”

Despite the relative normalcy, there is another big change.

Gabriella Accardi, a first-year in the College of Engineering, is in the liturgical choir and Tuesday night Mass choir and said her favorite part of Mass is the singing. However, due to COVID-19, the choir isn’t allowed to perform in person at the Chapel of the Holy Family. In place of the live choir though, music is pre-recorded and played at Mass.

“(I) can’t do it during Mass, so I do it in the recording,”Accardi said.

Accardi said the other change, besides the music, is communion.

“We don’t get the blood of Christ,” Accardi said,  because that involves everyone sharing the same cup. Aside from those limitations, Accardi said that they still have been able to do retreats, even if the usual activities are changed to be COVID-19 friendly, and the purpose of Mass is still there, as well the “aspects of community and faith” still being accessible.

Accardi attributes the relative normalcy to the campus ministry as she says they “put in effort to make it accessible for everyone,” and that they’ve made an effort to keep things “as close to usual” as possible.

Students who wish to attend Mass can find information on the Instagram: @mucampusmin or the campus ministry website.