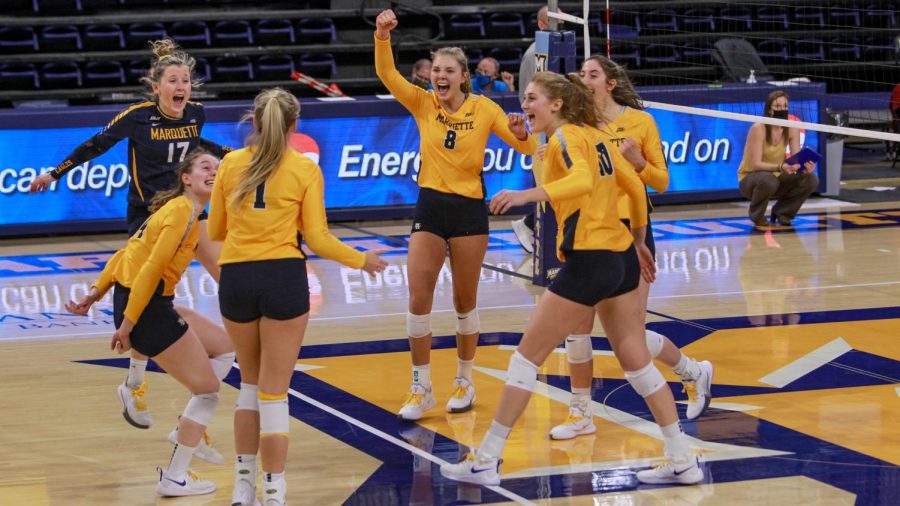 With a season full of ups and downs, cancellations and postponements, the Marquette volleyball team has remained strong through it all. Head coach Ryan Theis has made sure to keep the squad grounded through the unfamiliarities.

“You have to deal with what is in front of you and the challenges that are in front of you,” head coach Ryan Theis said. “It’s been a pretty constant message that I think has been received really well from my team. We have 16 really good people that understand what is really important (with) what we can and can’t control.”

The team finished their adjusted season with a 9-3 overall record, while going 4-2 in BIG EAST Conference play. The team also ranked consistently among the NCAA’s Women’s Volleyball Division I rankings of top 25 teams throughout the season, sitting at No. 24 for three consistent weeks throughout February. According to the most recent NCAA DI Women’s Volleyball Ranking released March 14, Marquette has now moved down to No. 27.

The Golden Eagles were able to complete 75% of their game schedule this season, playing 12 of the 16 games. The four games that were unable to be played were due to COVID-19 precautions by either the opponents or Marquette. Junior defensive specialist Katie Schoessow acknowledged that the time they have been on the court has been taken simply an opportunity to play the game.

“Out of all the (BIG EAST) conference teams, we have the most games played. We are lucky enough to have that and, obviously, the cancellations you can’t do anything about,” Schoessow said. “We are just glad we were able to have some matches played and hopefully looking forward to competing in the BIG EAST Tournament.”

The BIG EAST Conference Tournament is scheduled for April 2 and April 3 in Omaha, Nebraska, and the Golden Eagles are heading into the tournament with an open mind. With the opportunity to build from their season’s BIG EAST matchups, such as the two meetings against the No. 24 Creighton Bluejays where they split the series back in early February, they are going in prepared for what is to come.

“We are up for the challenge, we have a great group of girls that is willing to stay motivated and compete in the BIG EAST Tournament, so we are excited,” Schoessow said. “Our first couple matches where we played Creighton was the best competition we are going to get … I do think being able to play our other top opponent, Creighton, in the conference is just going to help prepare us for playing them again in the BIG EAST Tournament.”

Notably, senior right-side setter Taylor Wolf led the team in regular season kills with 123, followed by sophomore outside hitter Hannah Vanden Berg with 108 and senior outside hitter Hope Werch with 101.

Not only do plenty of people lead the stat sheets, but also multiple players have taken over leadership positions on and off the court as well.

“I really think what is really great about this team is there really isn’t a specific person (that is a leader),” Schoessow said. “All of us are really trying to help step up right now which is really great. It’s good that it’s not just one person on the team. What’s cool is it doesn’t really matter our age. This team doesn’t really care about a freshman trying to be a leader and take over. Every single person leads by example in ways.”

With the BIG EAST Conference Tournament approaching, Marquette will be able to see, and potentially play, new competition from the East Coast side of the BIG EAST Conference, which includes Villanova, St. John’s, Providence, UConn and Seton Hall. The original 12-team conference had to be split into East and West divisions, for precaution purposes regarding travel safety due to COVID-19.

While the season played out unpredictably, the Golden Eagles continued to acclimate the mentality of taking it one day at a time.

Theis said one thing his squad has had to learn this season is how to make constant adjustments while still practicing the mindset of preparedness to play, no matter when that time might be. Senior setter Sarah Rose has also been on the team’s minds this season, as she is undergoing cancer treatment.

“I have taken special consideration in not making things a big deal,” Theis said. “Because there are a lot of bigger things going on out there right now, including Sarah Rose. We talked about (if) things fair. At one point we got to a situation when something wasn’t fair. I said would we rather be in our situation or Sarah Rose’s, because is her situation fair? It’s not.”