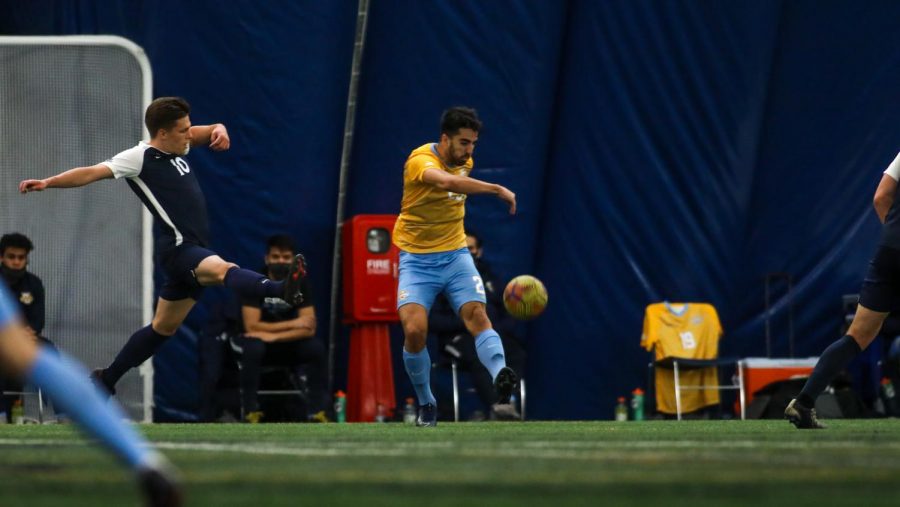 Junior midfielder Zyan Andrade kicks the ball past a Xavier defender on March 17. He scored the Golden Goal on Saturday afternoon against the Creighton Bluejays to give Marquette its sixth win of the season (Photo courtesy of Marquette Athletics.)

Junior midfielder Zyan Andrade scored his second game-winning goal of the season Saturday afternoon to give the Marquette Golden Eagles (6-1-1, 3-1-1 BIG EAST) their sixth win of the season.

It was a hard fought battle with the Creighton Bluejays (3-4-0, 3-2-0 BIG EAST), who handed the Golden Eagles their first loss of the season in double overtime when these two teams first saw each other Feb. 20. After heading into overtime tied 1-1, Marquette was able to come out on top this time around in the 94th minute to head home with a 2-1 win.

Things were intense right out of the gate, as Creighton first-year midfielder Owen O’Malley was issued a red card in the eighth minute, forcing Creighton to play a man down for the rest of the match. First-year forward Beto Soto took advantage of the situation and scored his third goal of the season to give the Golden Eagles the early edge.

Redshirt goalkeeper Chandler Hallwood kept the Bluejays off the scoreboard through the first 45 minutes and made two of his three saves on the day before halftime. Both squads had four shots in the first half, three of which came on goal for Marquette.

Creighton came out of the break looking for the equalizer and got it just three minutes into the second half, redshirt sophomore defender Jake Ronneberg scored in the 48th minute. It would be the only time the Bluejays found the back of the net.

The Marquette defense was able to recover and held Creighton scoreless for the remainder of the game. Both teams finished with four shots on goal, but the Golden Eagles outshot the Bluejays 11-9.

The Golden Eagles will be back home in Milwaukee March 24 at 6 p.m. Central Standard Time for their second match of the season against the DePaul Blue Demons (2-3-2, 2-3-0 BIG EAST). Marquette defeated DePaul 3-1 on March 6 in Chicago behind two goals from Lukas Sunesson. The game will be telecasted on gomarquette.com.