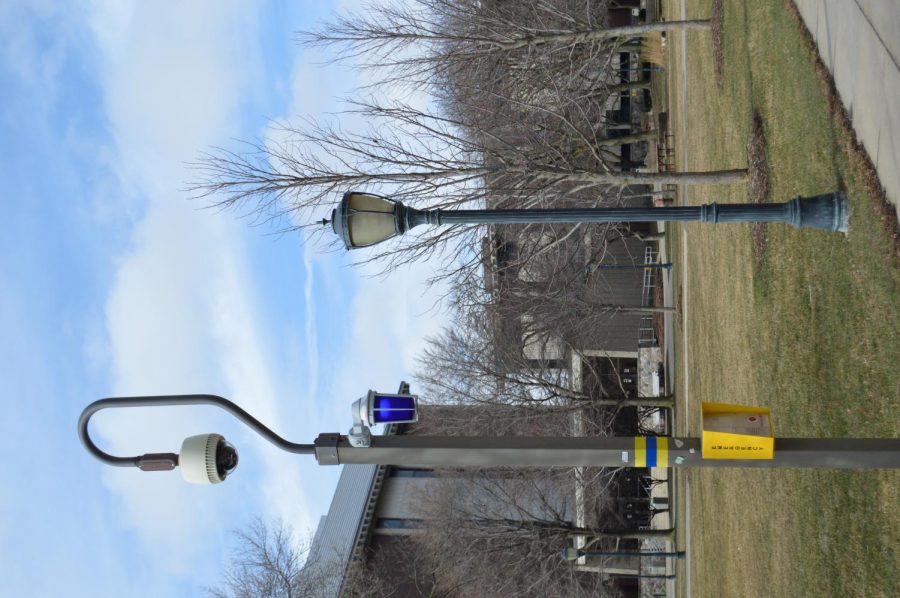 MUPD blue lights are located in various spots around campus

“We both screamed and ran away … we asked kids on the sidewalk to call 911 and waited until Marquette University Police Department came to defuse the situation,” Lucy McManamon, a sophomore in the College of Nursing, said. She had been hammocking with her roommate on campus when an unknown woman approached them and pulled out a knife.

Although this incident occurred last fall and the two girls escaped with no injuries, cases of harassment have continued, as a man was recently detained last week after “threatening and striking women” in the Marquette campus area.

McManamon, who is originally from a small suburb in Minnesota, said that she feels safer in the city now. However, the transition to Milwaukee last year took her “a little bit to adjust.”

“I have learned to be more aware of my surroundings,” McManamon said. “I feel safer now that I’m more familiar with Milwaukee but there are still times when I feel uncomfortable.”

Despite being more familiar with Milwaukee, McManamon said she has yet to walk alone at night and doesn’t intend to in the future.

“My friends and I always walk in groups at night or have people text us when they’re back safe,” McManamon said.

According to a 2014 survey on street harassment, which is defined as “unwanted comments, gestures and actions forced on a stranger in a public place without their consent,” 65% of women nationwide — in comparison to 25% of men — have experienced this form of harassment.

Lisa Rogers, a parent of a sophomore in the College of Business Administration, said she “checks in” with her daughter at Marquette more often than she does with her son.

“We check in with our daughter more than our son, who attends a very small liberal arts college in Colorado,” Rogers said. “Many of our check-ins with our sophomore daughter are after we receive a text that a possible safety concern has occurred.”

Rogers said that the amount of safety alerts she receives from MUPD is concerning. However, she recognizes that safety issues are simply a part of living on an urban campus and appreciates that Marquette has their own police department.

Although Marquette has their own police department, Jennifer Williams, a part-time professor in the College of Arts & Sciences and past instructor of a course on sex trafficking, said her motto for bystanders is “if you see something, say or do something.”

“If you see a woman alone, being followed, we should all be ready to intervene or call the police,” Williams said. “Too often bad things happen when bystanders do nothing.”

According to a 2020 report by the Human Trafficking Institute, Wisconsin was ranked sixth in the nation for human trafficking, which is defined as “the use of force, fraud, or coercion to obtain some type of labor or commercial sex act.” This report highlighted Milwaukee as a “hot spot” for these cases.

“Milwaukee does have a reputation for being a source city for human trafficking, likely due to generational poverty and de-industrialization,” Williams said.

These “hot spots” were often in areas of Milwaukee that had higher rates of homicide, non-fatal shootings and poverty along with lower rates of education. In a report that gathered data from 2013 to 2016, the “hot spots” for sex trafficking were toward the south side of Milwaukee.

However, a paradigm shift may be approaching in regard to how sexual harassment and assault cases are handled.

“Sexual harassment is very common,” Williams said. “What is uncommon and changing is our ability and willingness to speak up about it, and what is changing even more is society’s general reaction to those willing to speak up. We are starting to believe the victims. That is the most encouraging development of all.”

Individuals looking to report an incident of harassment or assault to the university should contact the Title IX coordinator, who is responsible for “the investigation of complaints falling under the university’s Title IX Sexual Harassment, Discrimination and Sexual Misconduct Policy.”

Individuals looking for support and assistance regarding sexual assault, relationship violence, stalking or sexual harassment should contact Advocacy Services. Advocacy Services is a confidential resource that, according to Marquette’s website, “will provide support regardless of whether the victim chooses to file a formal report with law enforcement or pursue a complaint through the university’s Title IX complaint process.”