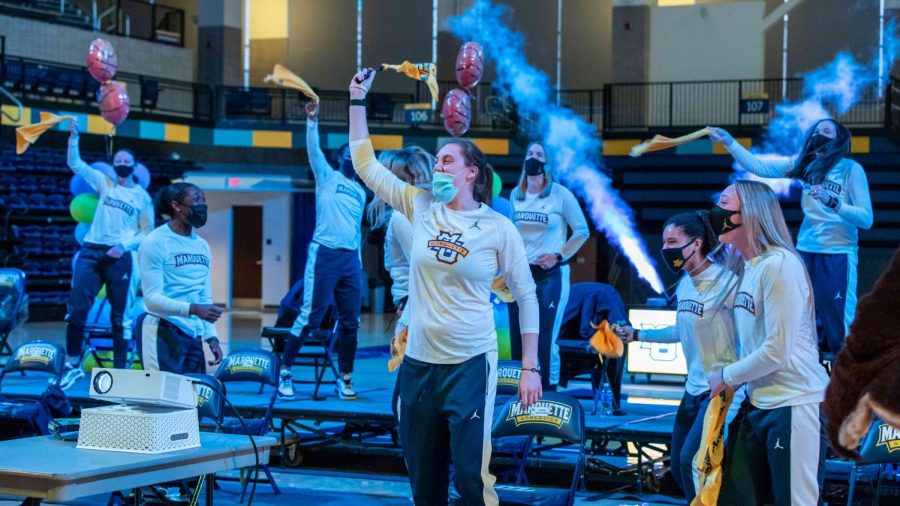 The Marquette women’s basketball team is set to take on the Virginia Tech Hokies in the first round of the 2021 NCAA Women’s Basketball Tournament in San Antonio, Texas March 21.

Marquette (19-6, 14-4 BIG EAST) earned a No. 10 seed in the River Walk Region after finishing second in the BIG EAST regular season while reaching its fifth-straight BIG EAST title game.

This marks the Golden Eagles’ fourth–straight NCAA Tournament appearance dating back to the 2016-17 season and the first appearance under head coach Megan Duffy.

“Just completely thrilled to see our name come across the bracket and be able to see the benefits of this incredible season in so many ways,” Duffy said. “I’m excited about the matchup with Virginia Tech and to just see our two seniors celebrate with the rest of the team tonight was special.”

After last season’s NCAA Tournament was canceled due to the COVID-19 pandemic, Duffy remains proud of how far her team has come in a year full of adversity.

“I’m still devastated from last year when some of our seniors weren’t able to play in the tournament, but part of me believes they’re still with us and some satisfaction comes with this group making it,” Duffy said. “Even in a year that was challenging mentally, for our team to win as many games as we did in this situation, I’m just extremely proud of them.”

Sophomore guard Jordan King, who missed out on last year’s tournament, is ready to be dancing for the first time in her collegiate career.

King averaged 9.0 points and 4.1 rebounds per game, starting all 25 games for the Golden Eagles during the regular season.

The Golden Eagles had a balanced scoring attack throughout the regular season and are led by senior guard Selena Lott, who averaged 14.6 points and 5.3 rebounds per game.

The Hokies (14-9, 8-8 ACC) finished seventh in the Atlantic Coast Conference during the regular season and are led by their dynamic duo of senior guard Aisha Sheppard and sophomore center Elizabeth Kitley.

Kitley averaged a double-double in the regular season, recording 18.5 points and 10.7 rebounds per game in her second season with the Hokies. Similar to Kitley, Sheppard averaged 18.3 points, while shooting 36% from the 3-point line.

Stopping the Hokies’ high-scoring duo will be key if the Golden Eagles want to advance to the Round of 32 for the seventh time in program history.

“Virginia Tech is very-well coached and works hard,” Duffy said. “I’ve got to seem them a couple of times on TV having their game in the background and I know they are led by a couple of great players in Kitley and Sheppard.”

The Golden Eagles are 6-12 all-time in the NCAA Tournament and are still looking for their first Sweet 16 appearance.

The Golden Eagles and Hokies are set to tip off Sunday at 11 a.m. CT on ESPNU.

This article was written by Sam Arco. He can be reached at sam.arco@marquette.edu or on Twitter @_sam_i_am119.