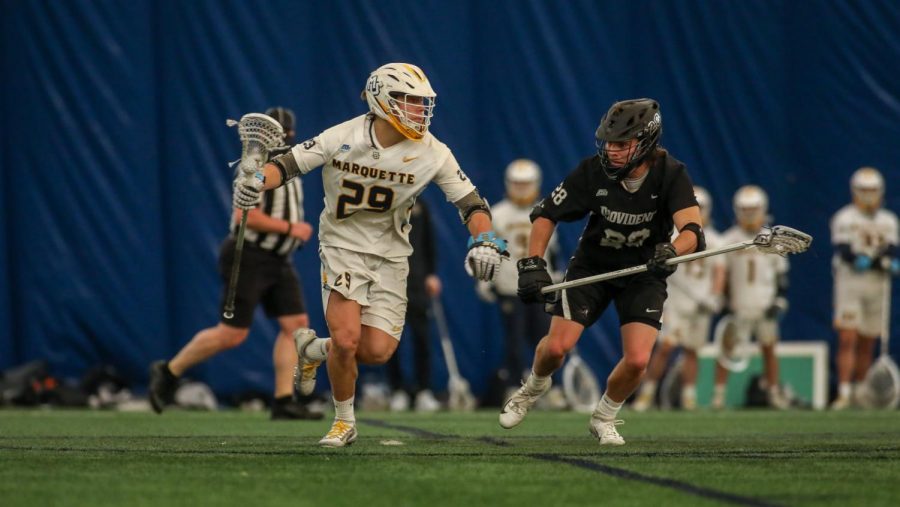 Junior attacker Matt Grillo led the way and posted five goals for Providence in the 12-8 victory at Valley Fields. He took 12 shots, seven of which were on-goal.

Six players found the back of the net for the Golden Eagles and redshirt junior attacker Griffin Fleming tallied his second hat trick of the season. In addition to his three goals, he also had one assist, as he set up redshirt sophomore attacker Holden Patterson’s goal in the first quarter. Redshirt senior midfielder Connor McClelland also added two assists.

Redshirt first-year goalie Sean Richard made his second start of the season between the pipes and had a career-high 16 saves. He was particularly strong in the first half, allowing just four goals. Richard also came up big and made two clutch saves when the Friars were two men up in the second quarter.

Providence came out blazing following halftime. After redshirt first-year attacker Devon Cowan scored a goal for MU, Providence responded with four unanswered goals, two of which came from Grillo. Sophomore attacker John Hoffman and senior midfielder Evan McGreen had the other two scores to put the Friars up 8-4 heading into the final quarter.

After trading goals twice, the Golden Eagles found themselves down 10-6 with just over five minutes left to play. First-year attacker Russell Melendez and redshirt sophomore attacker Garrett Moya each scored a goal to trim the lead to two, but PC stifled the comeback effort with two late goals from McGreen and Grillo.

Marquette was outshot 47-44 and also had six fewer shots on goal. They also struggled to get possession on faceoffs, going 7 for 24 (29%). The Golden Eagles did make the most of their man-up chances, as they went 2 for 3 (67%). The Friars could not get anything going with the extra man and went just 1 for 6 (17%).

The Golden Eagles will now look to get their first win of the season on the road against Notre Dame (2-0, 0-0 ACC) March 17 at 3 p.m. Central Standard Time. Marquette has an 0-8 record against the Fighting Irish with five of those losses coming on the road.