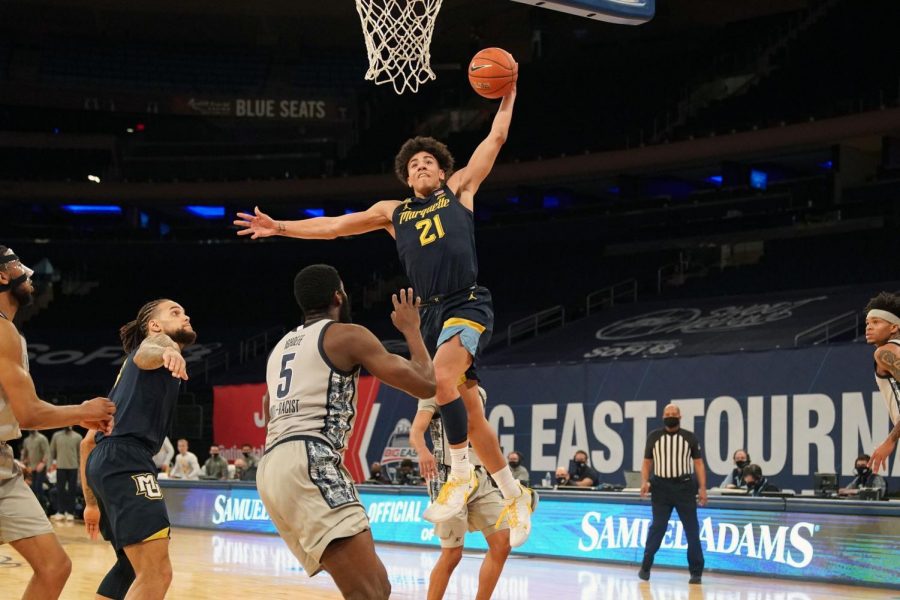 Sophomore guard D.J. Carton (21) throws down an aggressive dunk in the first half of the team's first-round matchup against Georgetown on Wednesday afternoon (Photo courtesy of Marquette Athletics.)

The Golden Eagles traveled to Madison Square Garden in New York Wednesday to play in their first-round game in the 2021 BIG EAST Tournament. They matched up with the Georgetown Hoyas, and came away with a 68-49 loss.

The story of this game for Marquette mostly comes down to the offensive struggles and foul trouble on the defensive end leading to easy points for Georgetown.

In the first half, both teams struggled offensively, but Marquette shot just 21%, scoring 14 points. Fourteen is the second-lowest point total in BIG EAST Tournament history for a first half.

Georgetown was not shooting the ball well from the field either, but they went 9-for-10 from the free throw line. Marquette did not attempt a free throw until more than 30 minutes into the game.

The second half was an improvement for both teams offensively, but not enough for Marquette to really cut into its deficit.

The Hoyas dominated the rebound battle 46-32, in addition to scoring 20 second-chance points compared to just four for Marquette.

Head coach Steve Wojciechowski said that was one of the key differences in the game, along with their struggles offensively.

“The primary area we weren’t tough enough was rebounding the basketball,” Wojciechowski said. “We had some looks from the perimeter that didn’t go in and we let it effect us defensively and on the glass.”

Sophomore guard D.J. Carton said that he thinks a lack of effort was key in the loss.

“A lot of it had to do with effort,” Carton said. “Our shots not falling translated to the defensive end and we didn’t do a good job of playing a whole 40 minutes with everything we had, especially with what was at stake.”

Carton led the Golden Eagles with 17 points on 7-for-12 shooting from the floor. He also added six rebounds, six assists and three blocks, but ended up with eight turnovers as well.

Marquette finished with 16 turnovers on the day, and while they forced 13 of their own, Georgetown scored 13 points off those turnovers compared to six for Marquette.

The Golden Eagles foul trouble caused two of their seniors, guard Koby McEwen and forward Jamal Cain, to foul out. McEwen did not score in the game and Cain had six points on 3-for-10 shooting.

Fellow senior forward Theo John struggled with a knee injury, and scored just two points in the game. He did not play in the second half.

“John was injured, looked like his knee was bad, so we tried to attack the pick and roll,” Georgetown head coach Patrick Ewing said.

This was Ewing’s first BIG EAST Tournament win in his fourth year as Georgetown head coach. His team avenged a loss to the Golden Eagles on Jan. 2, where Marquette came back from a 16-point halftime deficit.

“We didn’t falter this time,” Ewing said. “We kept fighting, and took the game over.”

Wahab finished with 19 points and eight rebounds for the Hoyas. He was second on the team in points to BIG EAST honorable mention senior guard Jahvon Blair, who had 20.

“We’ve been playing better as a team, and this time we were able to keep the lead,” Wahab said. “Our rebounding was really good on both ends.”

The Golden Eagles’ season, now over, ends with a record of 13-14 overall and a first-round loss as the ninth seed in the BIG EAST Tournament.

After making the NCAA Tournament two years in a row and then having last year’s tournament cancelled, the team will not be returning to the tournament this year in Wojciechowski’s seventh year as head coach.