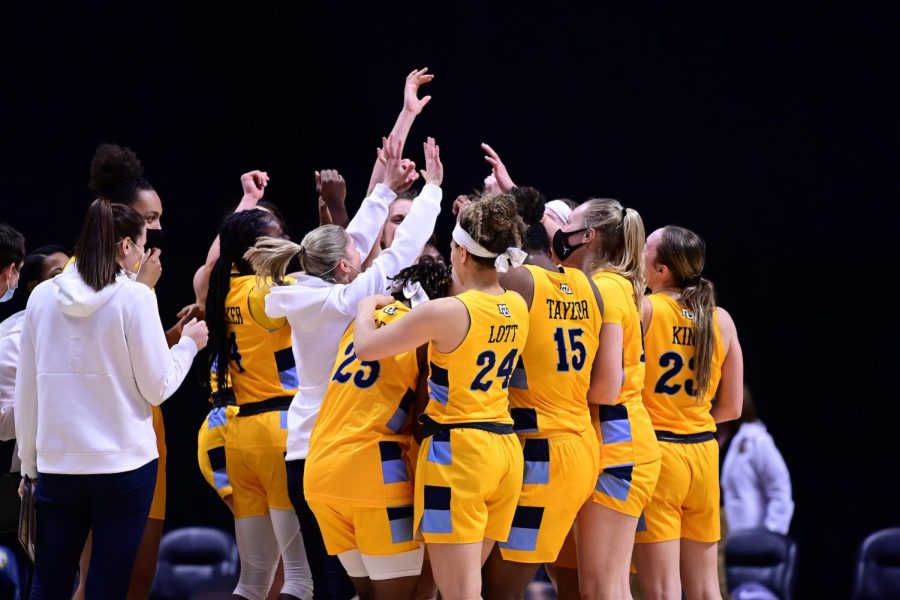 Marquette women's basketball celebrates in its 64-59 win over Creighton in the BIG EAST semifinals' on Mar. 7 2020. (Photo courtesy of the BIG EAST Conference.)

Marquette women’s basketball looks for its first BIG EAST Tournament Championship since 2017, taking on the No. 1 UConn Huskies Monday night in the finals at Mohegan Sun Arena in Uncasville, CT.

The Golden Eagles (18-5, 14-4 BIG EAST) are coming off a 64-59 win over the Creighton Bluejays Sunday. Despite a few chances Creighton down the stretch to either tie or take the lead, Marquette was able to hold on.

“We’re absolutely thrilled to be playing in the finals tomorrow against Connecticut,” head coach Megan Duffy said. “Just overall proud of our group to hang in there towards the end, make big plays, big shots led by Selena Lott. Fortunate to move on.”

Marquette was led by senior guard Selena Lott. The Co-BIG EAST Defensive Player of the Year finished with a game-high 27 points, four rebounds, an assist, a steal and a block.

“She played like a senior who didn’t want to lose,” Creighton head coach Jim Flanery said. “She’s always really good defensively and her assists numbers are really good. She hurts in so many ways. That’s what makes her a great player, (she) can kind of control the game  or really impact the game in a lot of different ways.”

“It was an awesome moment,” Duffy said. “What a hard-earned 1,000 points for her career. Just the way she’s worked and committed to this program, accepted any role her coaches have given her.”

For Lott and Van Kleunen, tonight’s game could mark the conclusion of their BIG EAST career. It will also be the fourth consecutive BIG EAST title game they will play in.

Following Sunday’s win, Lott talked about having the chance to win that trophy one last time.

“We got to go out and play with our hearts,” Lott said. “The last three years have been devastating so just think having that mentality to attack is what it is.”

Meanwhile, the Huskies are coming off a dominant 84-39 victory over Villanova Sunday. UConn’s dominance inside the paint and rebounding allowed the Huskies to advance to the BIG EAST title game. It also was their 232 straight win against an unranked opponent.

Unlike the last two games, Marquette enters championship Monday as the “non-favorite” and are seeking their first ever win against the Huskies.

Last time out versus UConn March 1, Marquette lost by just 10 with a score of 63-53. Duffy said her team knows the past, but is thrilled to be in another championship game.

“We’re looking forward to playing them for the third time. We’ve learned a lot in the last two games,” Duffy said. “We struggled the first time we played them but then I thought when we went out to Connecticut, a little less than a week ago, we improved on a couple little things. We made it a little bit more difficult for them. We know the task at hand tomorrow is going to be challenging, but we feel good.”

The 2019-20 BIG EAST Coach of the Year mentioned the message to her team heading into the game is simple.

“You’ve got one game to show up and try and get a great 40 minutes together and see what happens,” Duffy said.
Fun Facts

The Huskies are ranked No. 1 in latest AP Top 25 Poll. UConn has been ranked in the poll for 524 consecutive weeks.
The Golden Eagles remained the only team in the BIG EAST to keep the same starting lineup in every game in 2020-21.
MU is tied seventh in the nation in assist per game, with 19.9 per game.
It is the first time UConn and Marquette will square off against each other in the BIG EAST Tournament.
Bueckers joined Maya Moore as the only players to win BIG EAST Player and Freshman of the Year in the same season.
Since 2013, UConn has won 159 straight against conference opponents, including tournament games.

Lott is the leading scorer for MU, averaging 15.2 points per game this season. In Marquette’s wins this season, Lott is averaging 18.1 points per game.
Van Kleunen continues to be steady presence for the Golden Eagles this year all around the court. Over the last seven games, the Mason, Ohio native is averaging 15.2 points and 7.0 rebounds. MU is 14-4 when she scores in double figures.
Bueckers has had as good of a first-year season as anyone has had. The first-year guard out of Minnesota is averaging 19.6 points, 6.2 assists and 3 steals per game this season.
Junior forward Olivia Nelson-Ododa brings an all-around presence to the floor for UConn. She has collected seven double doubles this season and is averaging 13.3 points and 9.3 rebounds in the last four games.

Marquette: Continue success of containing Bueckers. As much as it is easier said than being done, the Golden Eagles held Bueckers to just 13 points last time around after a 30+ point performance in the first matchup.
UConn: Win through the press. In the two regular season matches against the Huskies, MU avered 18.5 turnover which resulted in 12 points per game for UConn off those turnovers.