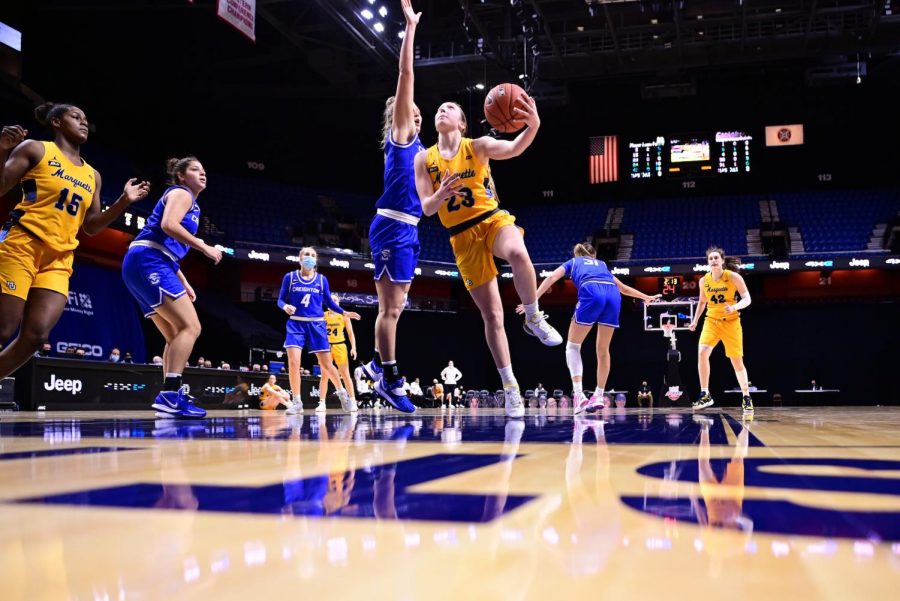 The Marquette women’s basketball team will head to its fifth consecutive BIG EAST Championship game Monday night after defeating the Creighton Bluejays 64-59 this evening in the BIG EAST Tournament Semifinals.

The Golden Eagles relied on their veteran duo in senior guard Selena Lott and redshirt senior forward Lauren Van Kleunen, who combined for 43 points throughout the evening.

Lott posted a game-high 27 points on 11-15 shooting to send her team to tomorrow night’s BIG EAST Championship game against the University of Connecticut Huskies.

Lott and Van Kleunen will now each play in their fourth-straight BIG EAST Championship game since arriving to Marquette.

“We have to go out and play with our hearts,” Lott said. “The last three years have been devastating, so I just think to have the mentality to attack.”

Van Kleunen finished with 16 points on 5-10 shooting to go along with six rebounds as the redshirt senior eclipsed the 1,000-point threshold in the process. Van Kleunen becomes the 31st Golden Eagle in program history to achieve this feat.

Van Kleunen joins Lott in the 1,000-point club as Lott reached the same feat earlier this season after scoring 27 points against Villanova Jan. 27.

“Lauren’s my girl, we’ve been going for four years now, and it’s the heart and hustle that Lauren has that is just amazing and beautiful to see her succeed and I love every moment of it,” Lott said when asked what it meant to share the same feat in the same season.

After Marquette beat Creighton by a combined score of 18.5 points in their previous two games in the regular season, the Bluejays wouldn’t let the Golden Eagles run away with the semifinal as easy this time.

Creighton was led by senior guard Temi Carda, who had a team-high 14 points, four assists, and four rebounds. Carda is one of only two seniors on the Bluejays roster as the team was assisted by many young players such as Dearica Pryor, who had a career-high 13 points.

Even after leading the course of the entire game, Marquette never led by more than 10 points as every time the Golden Eagles made a run, the Bluejays would answer with a run of their own.

Despite the Bluejays winning the rebounding battle, which Marquette is usually known for, the Golden Eagles showed great poise down the stretch thanks to their veterans.

Creighton had a chance to tie the game or take the lead late with 10 seconds left in the fourth quarter before junior forward Chloe Marotta forced a jump ball, leading to a pair of made free-throws by Van Kleunen which ultimately iced the game for Marquette.

“We knew coming into this game against Creighton for the third time playing them was going to be a grind and a battle against Coach Flanery’s team,” head coach Megan Duffy said. “Give credit to Temi Carda, who was relentless these last three games, giving us all we can handle, but I was just overall proud of our group hanging in there towards the end, making some big shots led by Selena Lott.

The Golden Eagles now take on the UConn Huskies for the third time this season, with this matchup being the biggest of them all.

The Golden Eagles will have to play their best game of the season if they want to knock off the No. 1 team in the country, as the Huskies swept the regular season series and have only lost one game all season.

After getting blown out in the two teams’ first meeting in Milwaukee Feb. 5, Marquette made vast improvements the second go-around in Connecticut, giving the Huskies a run for their money March 1. The Golden Eagles will have to learn from their earlier mistakes from their previous matchups if they want to complete the upset Monday night.

“We know the task at hand is going to be challenging, but we feel good,” said Duffy. “You got one game to show up and put 40 minutes together and see what happens. Anytime you get the chance to play for a championship, no matter who it’s against, we’re thrilled.”

Tipoff for tomorrow night’s game is set for 7 p.m. Central Standard Time at the Mohegan Sun Arena and will be televised on FS1.