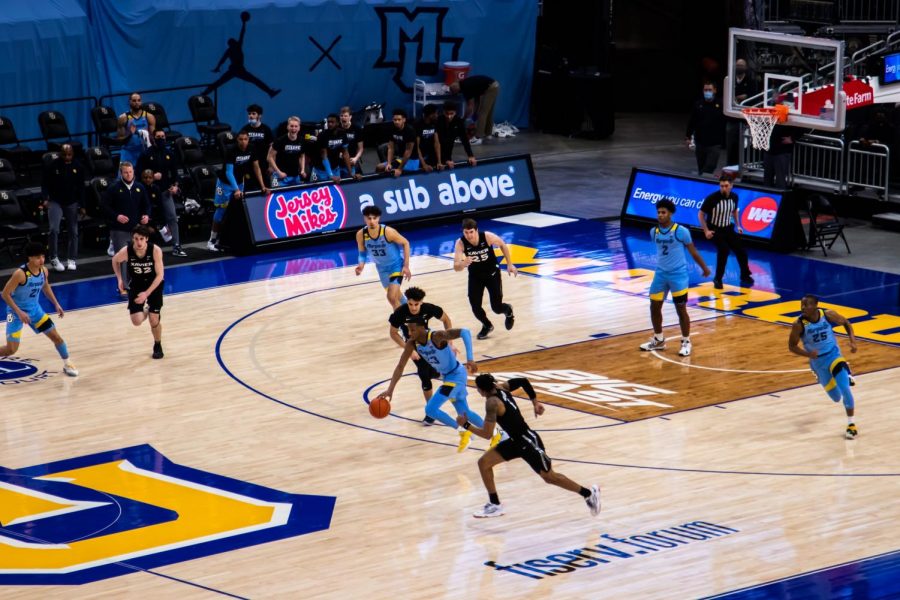 “I got really emotional before the game when those guys were being announced,” head coach Steve Wojciechowski said. “I’ve known Koby now for close to four years, but those other guys I’ve known since they were finishing up their sophomore year in high school. It’s a long-term relationship and there’s been great investment made both ways — players and coaches and the people that support them, and they mean a lot to me personally.”

Cain said out of all the moments from tonight’s game, watching his mother talk on the jumbotron prior to the game really stuck with him.

“I really wasn’t expecting it and I didn’t know that she made a video like that,” Cain said. “(It) kinda got me emotional and I’m really not an emotional guy, so that’s probably something I would cherish and remember.”

Sophomore guard D.J. Carton aided the seniors in spectacular manner, posting 16 points, seven rebounds and three assists on a 5-for-11 shooting performance from the field.

“D.J. has gave us a comfortability to know that another great guard has the ball that can make plays and also pass and get other guys involved,” Cain said. “With D.J. being here it’s a stress relief. We have a great player. He’s strong, fast, athletic — he’s all those tools.”

The Golden Eagles got off to a strong start and brought defensive intensity early, as they held Xavier to just five points through the first eight minutes of play. The Musketeers also started the game shooting 1-for-6 from the field.

“We wanted to really crowd Freemantle in the post cause we have a great deal of respect for him,” Wojciechowski said. “And then our ball screen defense was gonna be huge because after movement they get the ball in the hands of Scruggs, who’s a tremendous player, and I thought our ball screen defense for the first half was really good.”

After scoring 29 points against MU on Dec. 20, senior guard Paul Scruggs had 18 points, six rebounds, three assists and went 7-for-14 from the field. Sophomore forward Zach Freemantle was held in check, posting eight points and six rebounds on a 3-for-9 shooting performance.

Marquette had an excellent shooting performance and finished the game shooting 51% from the field and 80% from the charity stripe. They shot 29% from 3-point range, but Xavier struggled severely from distance, going 4-for-24 from deep.

John has already announced his plans to move on from college basketball following the end of the season, but Cain and McEwen could both take an extra year of eligibility if they so choose thanks to the new rule implemented by the NCAA. If they do not plan to do so, their final regular season in a Marquette uniform has ended on a high note.

“It makes me emotional thinking about the type of human beings they are and the type of men they are,” Wojciechowski said. “Whatever community they end up in, that community’s gonna be better because they’re in it.”

The Golden Eagles will travel to New York on Wednesday for the first round of the BIG EAST Tournament where they will face the Georgetown Hoyas (9-12, 7-9 BIG EAST) at 2 p.m. Central Standard Time. The game will be telecasted on FS1.